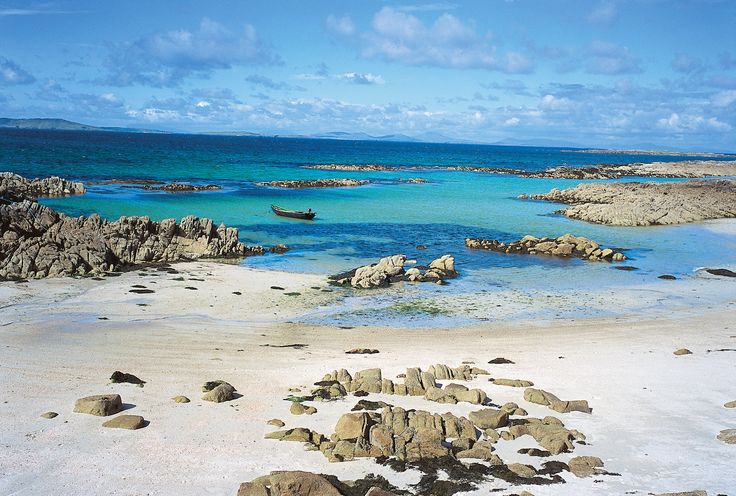 There is a beautiful drive, along the coast of County Galway, heading out from the city.  I had the pleasure to take this drive recently with my father.  He was born in Carraroe and likes to head out that direction every now and again.

We drove west, admiring the scenery. We reached Carraroe, and drove around the town for a couple of minutes. Then we headed out the other side of the town, down to the Coral Strand.

The Coral Strand (pictured above) is a place of rare beauty, a type of extreme, almost terrible beauty that Connemara has in abundance. This is a place that sand isn’t even hard enough to survive, the hard coral underfoot a curious kink of the local ecology. (It is actually a type of coralline algae known as maerl, if you’re interested.)

Anyway, there we were, standing on the shore, the whole of Europe at our backs, nothing but sea, salt and wind far past the horizon. Just off to my left I noticed a plaque. Unperturbed by storm or sea, it proudly proclaimed that this area was a filming location for ‘Poitín’, the first ever Irish language production.

Poitín, first broadcast on RTE in 1979, is a film by Bob Quinn about a moonshiner (Cyril Cusack), and his dealings with two local men (Donal McCann and Niall Tóibín) who make a bit of cash on the side selling the contraband around the community. They run out of their supply and return to the moonshiner to steal what he has left, but he has no intention of letting them get the better of him.

The film views as somewhat of a counterpoint to the Romantic West, as seen in films such as The Quiet Man. The characters are degenerate, seeming to have nothing on their mind but their next drink.  It is an Ireland far from the Mayo that John Wayne knew. It is an Ireland of alienation and frustration, a version of Ireland not seen on any postcards.  Indeed it was too real for some, with calls to ban it soon after it first aired. This was a success for the director, who strove to show the real Ireland as he knew, an Ireland that he felt needed to be seen.

The existence of this movie seems to me a fine metaphor for the state of film in this country.  Movies in Ireland may not be in plain sight. You may have to go out of your way to find them. But they do exist, and if you make the effort to go and seek them out you will be rewarded.  There is a challenging beauty out there that you would be lucky to find anywhere else.