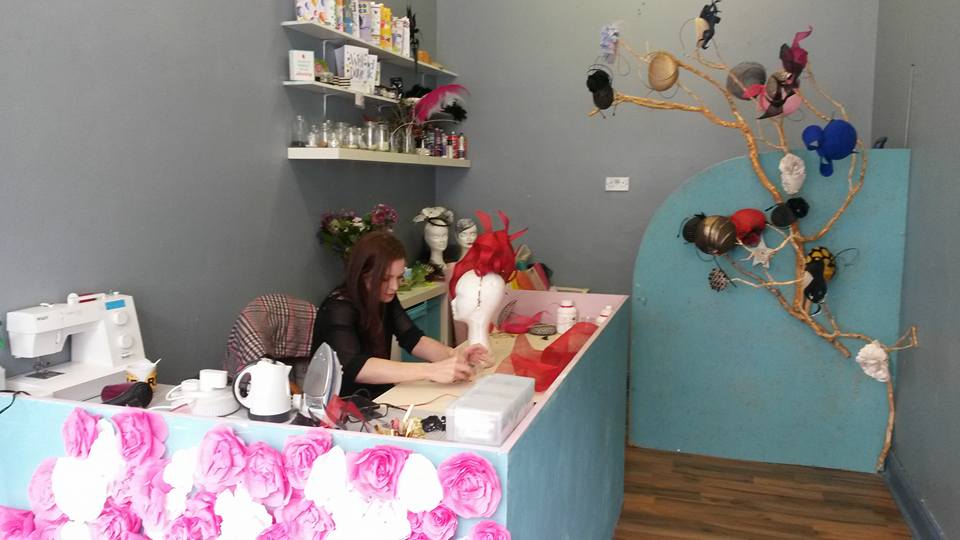 Facebook photos of suntanned hands clutching cocktails on a beach by secondary teacher friends who have broken free of their students for another season, and posts of Minion memes by primary school teachers signalling their imminent two month break pure and simply signal the arrival of summer, and with it wedding and races season. Hurray! I sat down with Michelle Kearns, a young up and coming milliner from Tuam, Co. Galway to talk all things hats and headpieces.

Michelle’s artistic background comes from way back. She showed talent from an early age, taking Art up to Leaving Cert level while developing a keen interest in photography, and following the exams studied Interior Architecture at Sligo IT. Finding there were no positions to be filled in her area of expertise following the completion of her course thanks to the recession, she took a job in a service station to make ends meet. But her creativity never faltered. A night course in Millinery for Beginners in GTI caught her eye and taught her the basics and she found she was well and truly bitten by the hat bug. From there on she taught herself more techniques from YouTube tutorials and general experimentation and things began to take off quite quickly.

Inspiration comes from all around. Her background in interior architecture plays a huge part, which can be clearly seen in her more sculptural creations, and her massive collection of fashion magazines built up over the years have been instrumental in motivating and retaining a unique take on the craft. While she is very happy to create and collaborate on more sedate pieces for the average wedding guest – albeit with her signature quirky twists – she is in her element when designing and constructing the elaborate pieces she’s becoming known for.

Michelle tells me that her process is trial and error to begin with; it starts with an idea which blooms as she goes along. She uses herself as a model to construct the bones of the piece and adds and takes away as the final product begins to form in her mind. I asked her when she knows it’s finished. “It’s hard to know! It’s never done. I have pieces that I’ve started and am meaning to go back to all over the studio.” It’s true – apart from the finished pieces languishing on the lovely indoor tree, the place is a confection of feathers and lace, material of all shades and textures and foam heads sporting pieces of all shapes and sizes, all which look perfect and ready to go to me, but for a perfectionist like Michelle her work is never done. One that stands out is a mohawk style that earned the designer a nod from the judges at last year’s Galway Races for Best Hat, along with the striking mask she herself sported at the event.

Another eye-catching piece is a forehead based, gothic style lace creation, which she wore when she was recently featured on Irish TV’s The Hat Show. The gold, floral crown worn by the presenter Emily O’Donnell was created by Michelle, and garnered a great deal of attention and coverage in the lead up to the show. O’Donnell herself earmarked Michelle as the one to watch, which is endorsement indeed for a programme that featured established milliners from all four corners of the country.

Michelle now works full time as a milliner, having secured a Back-To-Work Enterprise Allowance. Anyone willing and eager to make an impression at Ladies Day or at a wedding this summer should make an appointment or call in to see her at her new studio, conveniently located on Vicar Street, Tuam. Although the pillbox hats are themselves beautiful and memorable, Michelle’s favourite pieces to make are the showstoppers – and why wouldn’t they be? Striking, inventive, and incredibly lightweight (I was treated to the immense privilege of trying a few on, and was blown away at how easy to wear even the most extravagant pieces were), one would be sure to get you noticed for all the right reasons; I have one lined up and ready to go for a month’s time, and another one in the works for August! Visit Michelle’s Facebook page (link is here) or call her on 087 1328740.

If you’re a craftsperson, designer, artist, model, boutique owner or in any way involved in fashion in the West of Ireland and would like to be featured in our AAE Fashion Profile Series give me a shout over on aoifeb.burke@gmail.com or contact me on Twitter, @AoifeBBurke.