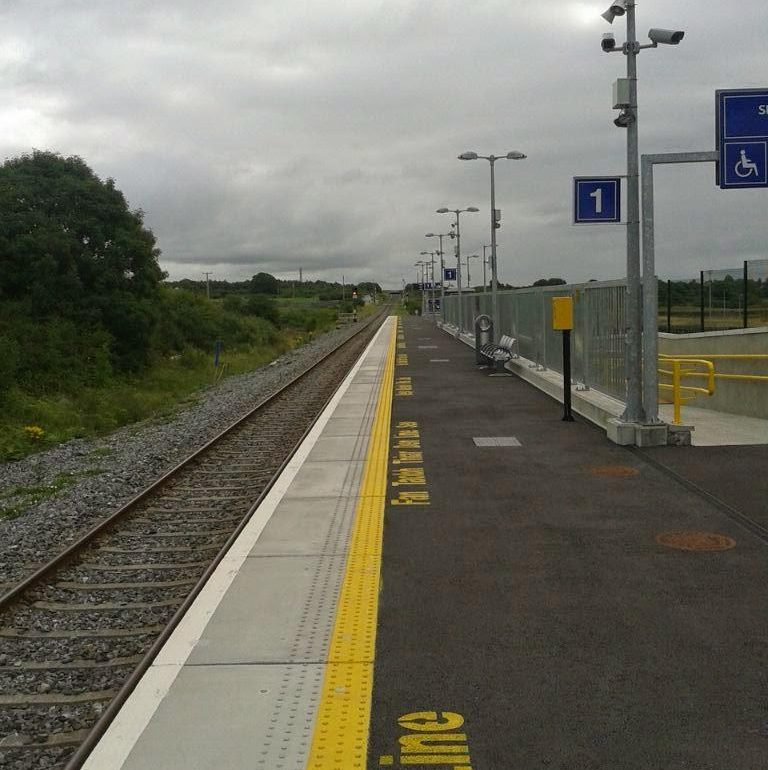 Blue Sky Thinking: People should be paid to park at Oranmore rail station, not charged.

A month or two ago I saw some rumblings on social media that parking charges might be introduced at Oranmore railway station. Whoever started these rumblings certainly rumbled me and well, here we are, concerned citizens looking at the internet again.

For some backstory: a few years ago Oranmore’s great hulk of concrete and yellow paint railway station was reopened with a large car park and a few little shelters. As a blow in, I immediately thought it was great and over time got used to seeing the same 3 – 4 faces there each morning as we slowly would mull over which parking spot we might use. I was concerned, that with the low usage those who lobby for road building would use it as an axe to grind against rail development and at some point my 9 minutes of scenery on the way to work each morning would come to an end, but sometime over the last few years, that changed greatly. What was initially a car park dotted with 7 – 8 cars each morning by 2017 was reaching capacity each day, and by 2018 was inventing capacity it never knew it had. The why and the how this happened I can only speculate on, but what is really clear is that 170+ car owners in East Galway have decided that to get to the city center in the morning it is, for whatever reason, better to take the train than it is to drive. And so, like all functions of capitalism, someone eventually will see a market, and someone will try and capitalize on that market, and in this case it seems that introducing parking charges would be a way to do that. That is how it works after all. However, the up-front charge for parking and the quick few euros revenue it might generate stand in the way of seeing the much greater financial and social benefits already being presented by the success of this rail station in recent years.

Let us look first at what it is already doing.

What we can deduce from the numbers in the car park? We know that these people are working in walking distance from Eyre Square. The train doesn’t go anywhere else. Maybe a few are going to Dublin, or Athlone, but all that means is that the benefits are happening elsewhere. From the pictures, you can see straight away, there are 170  fewer cars going into the city in the morning and leaving in the evening. In traffic terms this is about 1km of traffic jam that we don’t have to look at first thing in the morning, about the length of the Lough Atalia road to the bridge. This represents about 12% of the distance to the city, but that isn’t including the time these people would have to spend looking for parking in the city when they arrive or the messiness and wear and tear of morning traffic. So already congestion is being reduced by these people. Translated into time, this represents about 8 minutes for every hour spent in traffic. Every person who has to drive into the city each morning now has about 35 hours extra a year because some people took a train. If those hours were counted in minimum wage terms, then people using the train are effectively handing 335 Euros to the people who have to drive into the city centre.
In terms of CO2 production, assuming all these cars are of a 2017 standard, at very least skipping this 8km of the journey will stop them producing about 160 kg of CO2 every day – or if you want a bigger number, that is around 42 tons a year – now while this figure isn’t adjusted for what the train itself consumes, neither is it adjusted for some of the cars being a little older, or that city driving is much less economical. For reference a ton of CO2 is about the size of two storey house although it takes a significantly smaller amount of it to make the air that we are breathing toxic. So small, that this 42 tons of C02 is enough to make 7 million milk cartons filled with air dangerous to breathe.
So we can see this 170 person group who are taking the train are saving you time, they are saving you money and they are contributing to a cleaner healthier Galway. So why should they be charged extra for this when they are already paying a combination of train fares and car tax to do us a service?
The success of this station should be rewarded, made an example of, venerated, put on a pedalstool and be given a small trophy and a garland. So as much as I like tiny trophies, the better way to reward positives is to create an opportunity for more positives. The most effective usage of the space at the station is to build up, not out, so a second floor of parking would probably the most obvious positive as it begins to reach capacity.

The most effective reward for the people who are already paying for the service is a price reduction. Where other cities introduce congestion charges, Galway has the opportunity two kill two birds with one stone by encouraging a better transport option while reducing city congestion. This could be accentuated a little more if a rail ticket were to get you a free bus journey from Eyre square.

A third positive would be an expansion of the creature comforts at the platform. Irish rail stations were once a montage of wonderful ironwork, stonework and what was at the time they were built, a sense of opulence in the flow of a daily commute. At some point this evolved into face high galvanized steel rails, hatred of pigeons through the medium of steel spikes, a waiting room made from leftover phone boxes and the overall feel of a chapter of Franz Kafka deemed to dark to publish. Instead of having the dull vision and lack of acumen of plugging in a few parking meters and sending a human thumbtack down every day to clamp a big yellow triangle of ironwork to somebody’s wheel along with a tasty removal charge, we could be looking at showing the progressive side of the west blended with the sense of history that has served the west so well for generations by developing the station with some kind of dark arts like architecture, or maybe even ergonomics.

As we move forward towards taking stock of the reality of carbon consumption, the grim realities of non essential car usage, the value of individuals and how we facilitate their use of time and how the west might ready itself for the difficulties this is presenting and will present, it is too easy to see these moments with a sense of panic when we could be looking at ways of dealing with it with a bit of style.