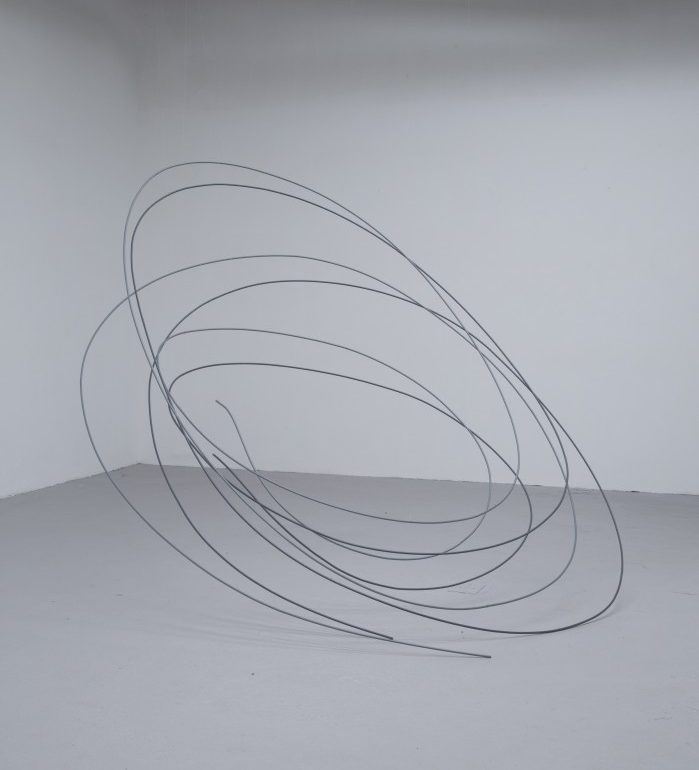 Exhibited as part of the 2017 Burren Annual, July saw the Burren College of Art hosting an exhibition of sculpture and video work by Chicago-based artist Susan Giles. The main gallery is given over to three large graphical forms and a video piece which depicts the tracery of the sculptural work as it ha s come to be made – generated in response to Newtown Castle itself. A smaller room hosts more recording with archival inkjet prints supporting the space. In turn, three women describe some of Chicago’s lesser-known civic buildings – themselves former libraries and monuments.

The rule of three become more apparent as we move through the main space. Also the choice of women to respond to questions of architectural form/composition and one’s movements through constructed social/historical stratum. To construct a 2D maquette of the sculpted components the artist asks three international visitors to the site to describe their experience of the landmark: ‘How does your body move through the tower?’ Their hands scribe patterns on-screen as they respond, with the resultant gesture re-materialized into the large-scale autonomous sculptures on display. ‘I wanted them to look like drawings in space’ reports Giles. The gunmetal grey stroke evokes graphite on paper with a slender, deft scoop and spiral lift that transcends the weight of the heavy tone. A Charles M. Schulz freneticism apposes the stillness of the suspension. High art meets the motion lines of Peanuts – gesture as an aesthetic strategy, ‘first fingertip and knuckle.’ The smaller room houses more video and a triad of prints which delicately depict the stop-motion flow of the speaker’s hands as seen from above. When asked about the link between the two projects Giles says ‘one of the things that bridges the two bodies of work is that architecture, like monuments or landmarks, communicate power and ideology about place. I’m interested in the way that individuals respond to and participate in that. Part of that is through the stories we tell.’ The hand gestures are once more inscribed on the screen as the participants gesticulate their spoken descriptions of the Chicago Cultural Centre, T.B. Blackstone Memorial Library and the Harold Washington Library. The nuance of their non-verbal communication becomes more apparent with this tracery in place – the tilt of the head as one recollects, the pursing of lips and inhalation as another tries to produce accurate phrasal-built construct. The negative space of the figures of the speakers as their arms and hands reach out in front of the white screen becomes a contributor itself – their bodies are as much a compass as their voices. Part of the difficulty in reviewing an exhibition of this calibre is that it has been so widely reflected upon already. Both Michaële Cutaya’s excellent catalogue essay ‘For a Monumentality of Desire’ and Giles’s own contribution to the Chicago Artist Writers website discuss the project in great detail. They also contemplate earlier work which addresses Interiors’ themes as well as the aesthetic and philosophical debate that support its flawlessness. It is extremely polished, well exhibited and oddly it’s reflective composure is a wonderful panacea to the nausea induced by the circuitous road system in the west of Ireland. What kept coming back to me were two things – firstly Andrew Benjamin’s discussion of Walter Benjamin’s ‘On Painting, Signs and Marks’ in which he considers the notion of the graphic line and how it’s identity (as opposed to the written line for example) becomes linked or exists ‘in relation to the background though equally in its differentiation from it.’ This sculpted work, fabricated and hung by the artist herself, takes the identity of the graphic line and reifies it with no white background but rather space around and through it. It is a joy to get under and over these flurries of activity – to see them suspended and to see their inception brings the viewer very close to the artist’s process. There is a refreshing generosity here – everything is open to us as opposed to that which is often deliberately obscured or hidden by the artist for fear of revealing too much. The second was my grandfather who, according to my father, was notorious for speaking with his hands – ‘up, down, all roads. When he talked.’