“Dance, dance: otherwise, we are lost”: Theatre as Loyalty 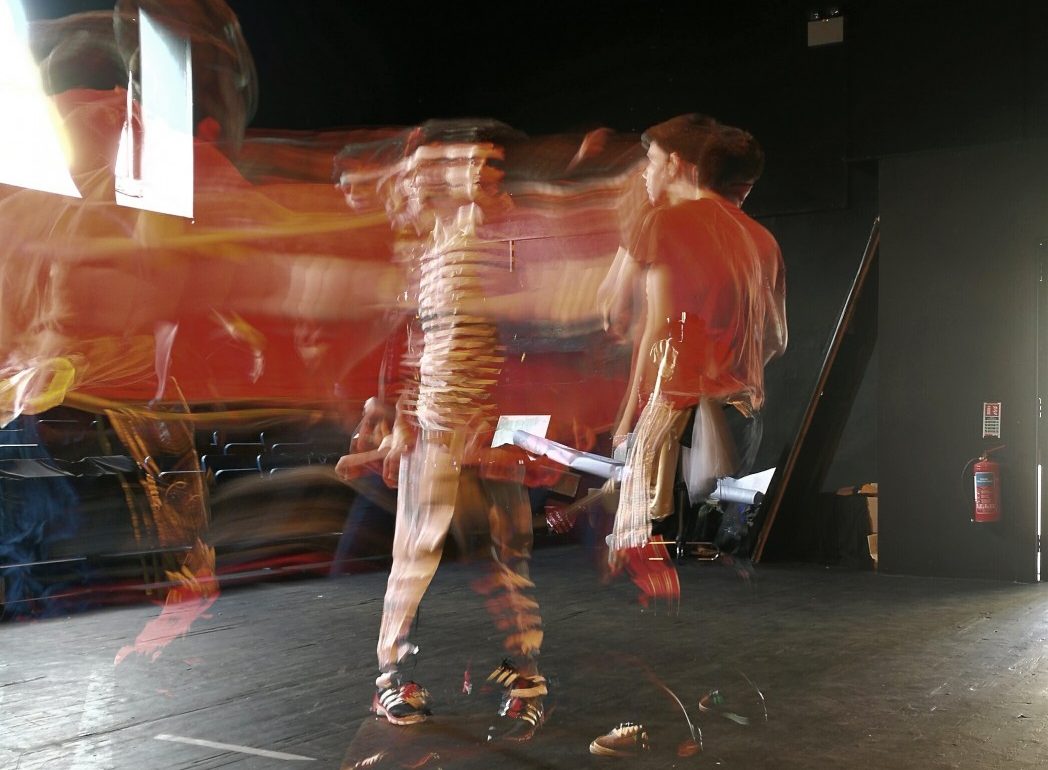 Image by Martin Kenny – taken in The GAFF, Co. Limerick

Around January 2015, one evening as I sat having dinner with my parents, the topic of my future (i.e. my way of earning a stable income) came up. It so often does for people in the haze of post-college.  I had just graduated from my undergraduate degree in English, French and Film Studies at NUIG the previous October, and my part-time gig as a kitchen porter for a pop-up café in Galway city had just finished up. I answered my parents’ initial questions with a sustained shrug, but I knew the time for actual words was nigh. I took a steadying breath and muttered, more to myself than to my mother and father: “I was actually thinking of going back to college to do a Masters in Theatre…”.

Now, my parents have always been supportive of my creative endeavors; the first people to buy tickets to a show I’m involved in, first to relinquish some cherished possession as a prop, the first to encourage me to strive for what I’m passionate about. But, in saying I wanted to pursue theatre, I could not help but feel the unasked questions lingering overhead, most of them my own. Why theatre? Why invite that instability into your life? Why struggle?

As I write this on the other side of having done that Masters, I can tell you the uncertainty is no less present. I am currently living in Limerick, unemployed, and the daily anxiety of checking my bank account requires ten minutes of mental preparation. Yet, if I was given the chance to do it all again in some unwelcome 17 Again turn of events, I would make every decision the same.

Theatre and the arts have such an intense pull on everything I do that to deny it would be to deny myself, and I do not make that claim lightly. Granted, it has yet to furnish me a stable pay check, but theatre has enriched my life beyond monetary value – something I’m sure any practitioner reading this can attest to. But how has it done this? Why does it hold such a high position in my hierarchy of needs?

The power of theatre is ultimately its potential for unification – both unification with other people as well as unification of oneself. Jean-Louis Barrault, a French actor, director and mime-artist described theatre as, “the meeting of two human groups. First, the audience. Second, the players”. It is important here that he states the audience as the first group, over the performers themselves. Theatre, without an audience, is a script. It is not complete. It is not an entire event. Theatre depends upon the joining of two distinct groups and in the interaction between them, theatre is made.

My own company, Sonar Theatre, gets its name from this idea. Performing is a dialogue of energy between the actors and audience – one group sends their energy to the other, giving the designated target the chance to accept, reformulate and send it back. Every moment is alive with shifting emotions and perspectives. Theatre therefore becomes a framework for the creation of empathy. It is a space or state in which someone becomes willing to accept the energy, thoughts and presence of another human being. This seems like such a simple statement, but in a world where we increasingly live online with hateful rhetoric so easily disseminated through our screens, the act of openly engaging with another person’s story in the same physical space as them is in fact revolutionary. The isolation and paranoia of contemporary society, in however small a way, begins to be dismantled by theatre.

In his book, Drama as Therapy: Theatre as Living, Phil Jones takes the idea of drama as a healing process to its furthest degree. He elaborates the etymological origin of the word “heal” as coming from “hale”, meaning to “make whole”. Although talking about the use of drama and theatre within a very specific context, this definition of the word “heal” can be applied to the idea of unification as mentioned above. The audience and the performers are two halves of the theatrical experience, and in performing a show in which the audience spectates, the two forces are brought together. They are made whole, and are in the original sense of the word, healed. The aim of theatre then is to bring groups of people into a common space, to witness the same event, and in exposing the group’s common purpose, an attempt to connect the individuals within it is made.

This would be the answer to my questions of, “why theatre?”, “why struggle?”. Theatre offers me a way of protesting against the common thread of isolation and dehumanisation so rampant in today’s world. It allows me to personally intervene in societal narratives much bigger than myself and ones which will still exist long after I’m gone. But, as shown above, theatre is ultimately about connecting with others, finding the ways in which our multifaceted existences merge into one.

In Being Mortal: Illness, Medicine and What Matters in the End, Atul Gawande discusses aging and care of the elderly through his perspective as a world-renowned physician and surgeon. He notes that for patients placed in nursing homes, what ultimately decimates a person’s quality of life is their lack of purpose. They are reduced to, “the Three Plagues of nursing home existence: boredom, loneliness, and helplessness”.

However, he documents a fascinating experiment performed by the young physician Bill Thomas in 1991 at Chase Memorial Nursing Home in upstate New York. To rid the service users of the Three Plagues, he flooded the home with cats, dogs, and birds. Each patient was given an animal to care for, assisted by the staff at the home. The experiment was a roaring success. In determining how the experiment met its goal, Gawande turns to philosopher Josiah Royce and his philosophy of loyalty.

Royce asked why only existing – being fed, safe and alive – seemed so empty and meaningless. He ultimately believed, as human beings, we strive for something beyond ourselves. Regardless of the size of the cause, whether it be esoteric or concrete, the important factor was, “ascribing value to the cause and seeing it as worth making sacrifices for”. In doing this, we, “give our lives meaning”. This dedication to a cause was articulated as “loyalty”. Royce states that loyalty, “solves the paradox of our ordinary existence by showing us outside of ourselves the cause which is to be served, and inside of ourselves the will which delights to do this service, and which is not thwarted but enriched and expressed in such service”. This has always been the draw of theatre for me. Theatre unifies us with others, and in doing so, ultimately unifies our sense of self. It allows us to individually strive for something, but the end goal is a collective one, something beyond our personal wants.

In becoming the Theatre Editor for An Áit Eile, I hope to create content for this section that speaks to theatre artists’ loyalties to theatre, and why they have decided to pursue it, not only as a career, but also as a way of life. For myself however, my entire views on theatre can be summed up in six words: “Dance, dance: otherwise, we are lost”. This quote comes from Pina Bausch, the single biggest influence on my theatrical work. She was an esteemed practitioner of dance theatre and her work speaks for itself (check out Café Muller on YouTube). Her words here are instructive and simple: perform, dance, act, write, speak, connect. Do whatever it is that drives you, that you are passionate about. You are the only person that can do those things in your unique way. If you do not, you are existing, not living.

It may not be a pay check, but it’s certainly worth far more.