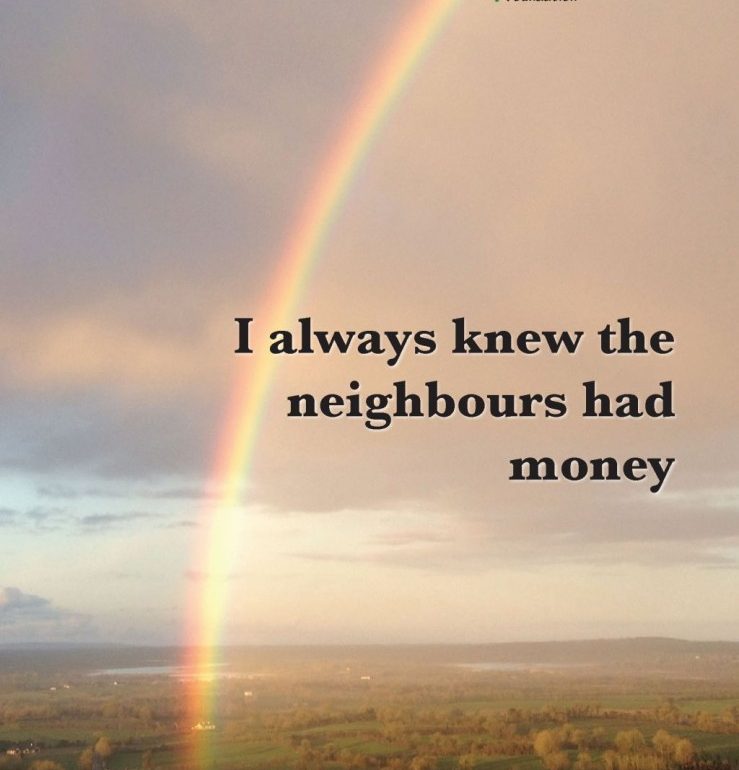 I always knew the neighbours had money , a collection of poetry by Dara Duke was published this year in aid of Mayo Roscommon Hospice.

In November 2014 Dara was made redundant from Bank Of America in Carrick on Shannon where he had worked for over twelve years. Dara, a voluntary fundraiser who has raised almost 60,000euros for Mayo Roscommon Hospice in the past, suddenly had a lot of time on my hands so he decided to revisit his writing and over ten weeks completed a collection of poems that would raise money for the hospice. The cover picture on the book was taken by Dara from the front door of his house and inspired him to write “The Hill”.

I always knew the neighbours had money is 5euros, with all proceeds going directly to Mayo Roscommon Hospice.

A Celtic Tiger from Crumlin, McGregor is his name, Notorious in the Octagon is now, how he has found fame, Announcing yourself to the world stage, your new found fans going crazy, After that first UFC win announcing “Dana, 60 G’s baby”,

His story is one of courage, desire and sartorial passion, As he moved from the Welfare State to SBG, Now looking ever the superstar in Louis Copeland fashion, He knew the welfare of John Kavanagh was the place to be,

What sets this man apart from the rest, The Irish Ali who floats like a butterfly and stings like a bee, Single minded determination to be the best, The Emerald jewel in the crown of the UFC,

An artist who waxes lyrically and physically in and out of the cage, Opponent on the ground, staying grounded the world at your feet, A gladiator held shoulder high on an eight sided stage, As Bruce Buffer announces “your winner, The Notorious Conor McGregor”, the King takes his seat.

The light beams through the window,

New Newgrange on the hill,

The morning is now in full flow now,

Five gardens in their magnificence,

But the greenery here is far from plain,

From Corn Hill to the Curlews and the Speckled mountain,

The patch work quilt of tree and field, the wind swept skin,

And as in my county’s name, the clouds are too,

Adding new colours to the landscape as they journey by,

Others stay for a while to admire the view,

The noise of raindrops like an applause from the sky,

Equal to the daytime views are the ones at night,

As they compete with the natural starlight,

Night looks over Moyglass before daylight takes the mantle,

And in the tsunami that is the modern day scramble,

On the go, always something to do,

A friendly stranger calls up the hill for a ramble,

Life stops in a moment when their first words are “Jesus, that’s some view!”.