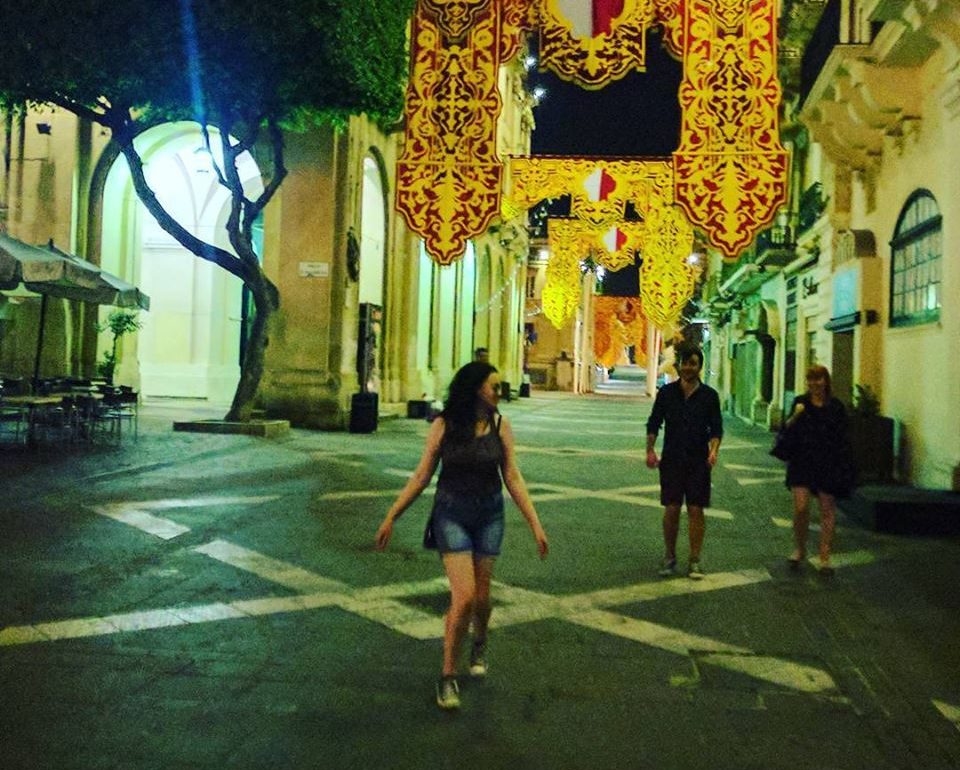 Any craic? Haven’t seen ya in a while. Did ya get new wallpaper for yourself? Ooh, those stripes are looking well! Give us a twirl. . .No? Ok. . . Can I have your bookmark? K, thanks. Ok, let’s see. . .where did we leave off, Mr. Pagemaster? Ah yes, the film festival. Myself and Louise also went to a few key screenings for the closing of Valletta Film Festival, including the really interesting documentary Beuys about the German artist Joseph Beuys; Radiance, a Japanese film about a passionate writer of film versions for the visually impaired; and a French film called Bright Sunshine In. Bright Sunshine in was the final screening of the festival, and was shown in the Herbert Ganado Gardens (terraced gardens overlooking the Grand Harbour in Valletta). By the way, Herbert Ganado, born in Floriana, was a famous lawyer, author and politician. His gift to the Maltese people and Maltese literature was Rajt Malta Tinbedel (I saw Malta changing). It’s a four-volume autobiography and it’s been recommended as an excellent reference for the social history of Malta. I’m hoping to research more about his work soon, so watch this space.

Since we last spoke, we have settled into our new house in Attard and explored the local area, including the San Anton Garden, the Ta’Qali arts and crafts markets, and the national football stadium.

We also managed to squeeze in some time to go for a dip in St. Thomas Bay in the fishing village  of Marsascala, when the first heatwave was starting to ease off. It was a much needed refreshment from being practically cooked alive, and we had a grand ole time. By the way, I promised you last time that we would check out Valletta Film Festival’s masterclasses and workshops. Unfortunately, due to last-minute job interview engagements and such, we could not make it to them. Alas, such is life! But we got some surprises along the way too.

We met with the volunteer coordinators of the Tai-Kultura programme for Valletta 2018 in the Chamber of Commerce, and Louise was offered a place in the Curatorial School for Artists – a one-week intensive lecture and workshop programme (28th August-1st September), featuring leading curators and art experts from around the world. It will be an opportunity to exchange ideas with international counterparts and further artists’ curatorial career development with professional networking opportunities.

Louise also started working part-time at Spazzju Kreattiv – Malta’s national centre for creativity at St. John’s Cavalier in Valletta. She will be posting about her work at the venue and its programme later, so watch this other space here too! Currently I am rubbing my back against our kitchen freezer and giving our latest mosquito guest a third warning. I have added many mosquito bite tattoos to my collection. It’s a symbiotic thing; they get their fresh Irish blood, and I get some pretty new ‘birth marks.’  I like to think of it as an initiation ceremony curated by Malta; a baptism of fire in this crackling inferno called summer (hehe). We’ve had two heat waves in the last month, with the temperature soaring up to 40 degrees, but thankfully it’s now back to a cool 30 degrees. There are also the festa fireworks, of course, and the memorable processions, such as the one we witnessed in Valletta a couple of weeks ago. A group of men carrying a religious sculpture had huge lumps on their shoulders from the weight!

Louise and Sean got part-time work at a restaurant on the Valletta waterfront promenade. Although they were happy to be offered work a couple of weeks after arriving in Malta, they regret to say that the pay is shit and their shifts finish after the last bus service at weekends. The general consensus from the locals is that people feel the need to take on as much work as possible, just to make a living and cover the rapidly increasing rent prices (a similar problem experienced in Galway, of course). Kevin found work as a butcher’s assistant – most shifts last for twelve hours, so it’s proven to be a difficult slog as well. Conor had two interviews today, in the seaside town of St. Julian’s (or San Ġiljan). This town is close to Paceville, an area famous for its nightlife spots, bars, restaurants and hotels. About two weeks ago I was offered a job as Content Editor at Skillcast, an e-learning company in Birkirkara. It comprises a team of content editors, designers, code developers, marketing specialists, IT staff, and the Accounts department (including a few other Irish people!) My role will involve building bespoke online e-learning courses for clients; taking on storyboarding projects; substantive editing and proofreading; coming up with ideas for making content more engaging and interesting for clients’ staff; updating the company’s blog and website; researching industry trends, practices, and innovations; editing content in animations, apps, games and e-books; producing e-books; liaising with translators on projects; reviewing courses with clients; consulting with subject matter experts and quality assurance staff on topics; liaising with the design and marketing teams, and building/maintaining e-learning portals for clients. The company has another office in London, so it will be interesting to work on project collaborations with them also.

On one of our free days myself and Louise browsed through the National Library in Valletta, and perused some interesting artefacts there, such as the historical accounts of St. John’s Order of the Knights Hospitallers in Valletta. The pre-1798 historical archives of the Sovereign Military Order of Saint John of Jerusalem, Rhodes, and Malta are held in the library. The Malta Study Centre microfilmed the Archives of the Order of Malta at the National Library in Valletta between 1989 and 1999. These documents tell the story of the Knights from their origins in Jerusalem and time in the Latin Kingdoms (1095-1291), their time on Cyprus (1291-1309), their tenure on the island of Rhodes between 1310 and 1522, and their time ruling over the island of Malta from 1530 until 1798.

The Archives of the Order of Malta (AOM) contain materials dating from the 12th century through the 18th century, when the French ended Hospitaller rule on the island.The archives contain records of the Knight’s diplomacy and letters of the Grand Masters, historical genealogies of the knights proving their nobility, papal bulls defending or protecting the Order’s privileges, and the internal legal documents of the Order, including statutes, visitation records, property holdings, and information about the Order’s naval operations.

Also, Louise volunteered  at the Balzunetta Towers event at Malta International Arts Festival. This event was commissioned by the Valletta 2018 programme. It’s a theatrical cabaret by Dominic Galea, produced and directed by Sean Buhagiar, and written by Alfred Sant. It treats the story of the old Balzunetta district or rather, Strait Street’s naughtier sister. Louise will also be helping out at the jazz festival, which takes place this week.

What’s that, diary? You want to hear more about the nightlife? Well, we checked out a gig played by Cryptic Street at The Funky Monkey in Gzira  and had a few sociables at one of our local wine bars, The Mezzanin. In St. Julian’s, we found Juul’s Chillout & Reggae bar – complete with bean bags and vegetarian dishes (and cocktails!) We also stumbled upon Cat Village in Paceville – a community of about twenty cats, where passers-by can donate money or cat food presents. It has a Facebook page and everything!! I was a silly Billy and blocked out the beautiful marmalade cat (see photo below), but just imagine lots of sleepy marmalade cats basking in the blistering sun.

Last week, parliament approved the Marriage Act and other Laws (Amendment) Act that will make Malta the 15th nation in Europe, and 25th world-wide to legalize same-sex marriages (6 years after divorce was legalized here). It’s been over two years since Ireland voted by referendum and approved same-sex marriage by popular vote, and we wish to congratulate our Maltese counterparts on this historical milestone. WOOHOO!!!!!

This weekend we will be checking out some al fresco dining events at Malta International Food Festival in Mdina (which is also known as the Silent City); afterwards we hope to burn off those tasty dishes at the jazz festival in Valletta. But now, it’s time for some wine (just to get into training for the next wine festival, hehem).

Till soon, my dearest diary. Don’t be a stranger!! Next time I’ll have some funny stories too. You’ll see. . .you’ll all see. K, byeeeeee!! Don’t lose my page, Mr. Pagemaster. Here, I’ll tuck ya in there. . Night night. Muhaha.