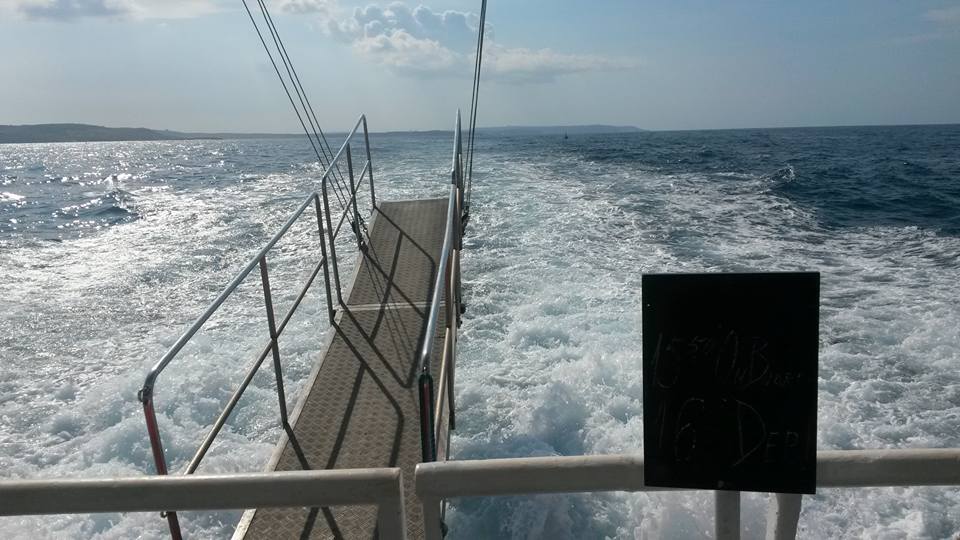 This is our seventh day in Malta, and we are still enchanted by the country’s beauty and charm. Since we arrived we have viewed a maisonette and a few apartments in Attard, Mosta, Birkirkara and L’Imsida. We opted for a six month lease at the maisonette in Attard. This area is in the central region; it’s famous for its San Anton gardens – the official residence for Marie-Louise Coleiro Preca, the president of Malta. The town is quiet and well connected to buses for the main areas, such as Valletta and St. Julian’s. We will move in on Friday the 23rd of June, and in the meantime, we are staying in an apartment in L’Imsida. I did my first volunteer shift at Valletta Film Festival on Friday, and I’ve already met so many friendly and interesting people from all walks of life. 2017 is the third edition of Valletta Film Festival, and it’s bigger than last year, with a new venue added – Herbert Ganado Gardens. On my first day I checked into the box office at 10am and received my volunteer pass and t-shirt, and got to know the volunteers and coordinators at the volunteer centre on Melita St. I was scheduled to volunteer at 3, so I used the time to familiarise myself with the streets of Valletta and the five venues for the festival – Pjazza Teatru Rjal, Spazju Kreattiv, Herbert Ganado Gardens, Pjazza San Gorg and Embassy Cinemas. Pjazza Teatru Rjal is an open air theatre at the entrance of Valletta. It was designed by the architect Renzo Piano on the remains of an opera house which was bombarded during the Second World War. The box office is located here, it has 800 seats, and it’s the festival’s venue for the opening and closing ceremonies, and all of the feature films in competition.  Spazju Kreattiv (St. James Cavalier) is a 105 seat, small art house cinema, and it hosts the documentary and short film competitions, and select titles from Islanders and other sections. This venue also has art studios, and spaces for workshops, masterclasses and theatre events. Ikkrea is one of their main projects for 2017-18; it’s based on the three principles of identity, diversity and legacy, and it was launched in 2014 by their current artistic director Dr. Toni Sant, and encourages open discussions by the public. Another project is the ACMLab Series, Arts Council Malta’s platform for information and networking sessions. (More on these projects later!) Herbert Ganado Gardens are terraced gardens overlooking the Grand Harbour, and for the festival they have been converted into an open air cinema. Films from Without Borders, focusing on the cinema of Latin America, and special screenings from Japan and Sweden are being played here. At Pjazza San Gorg, a section of Palace Square has been transformed into a large theatre, where films from the Masters of Cinema sidebar and other special screenings will be shown free of charge during the week. Embassy Cinemas screens the Teens Only section of the festival. It also re-screens most films selected for the different sections of the festival.

In addition to the films, there are workshops, masterclasses and talent talks taking place throughout the festival: a workshop entitled Everyday Migration (sponsored by UNHCR, giving insight into the use of online media as a tool to raise social awareness); a panel discussion for film makers in small nations called Film Co-Production; a two-hour talk about starting an animation studio from scratch (giving an overview of the biggest animation markets); a three-hour masterclass on script presentation and film pitching; a masterclass on digital marketing for film; a masterclass on virtual reality – the theme of the spectator in VR versus “classical film”, following the VR experience in Pjazza San Gorg; and talent talks involving daily public discussions with Valletta Film Festival’s directors, actors and producers in the Pjazza San Gorg tent. These will run until Friday the 23rd of June, so more on some of these later also!

As is the case with every festival, there were some technical difficulties on the opening night. One noteworthy thing, with regard to the ticketing, is the fact that VFF uses QR codes for their tickets. Sometimes the QR code didn’t scan, as the resolution wasn’t clear enough. However, when scanned properly, it’s very useful and efficient, and this is an option that could be taken into consideration for ticketing at Irish festivals. QR codes are also featured on bus tickets in Malta, which, likewise, could also be useful for public transport services in Ireland. The after-party for the opening night was held in Hastings Gardens, located on top of St. John’s and St. Michael’s bastion, on the west side of Valletta’s City Gate. There was a live jazz band, a free bar (which we embraced), and there were couches dotted along the gardens. Its setting was like a miniature version of the Body and Soul Festival in Ireland, with its cobalt mood lighting bouncing off the trees, wacky dancing characters donned in garish costumes, and intricately arranged flowers. We enjoyed gourmet platters of octupus, mozzarella, miniature burgers and Maltese pastries served by their friendly caterers, reflected on our experience of Malta so far (recalling things like the pool party in Sliema from the previous night, when we jumped into the pool with our regular clothes on and had splashing competitions), laughed until our bellies were sore, mingled with volunteers, and partook in some very dodgy dancing.

On Saturday I worked at the information desk in Pjazza San Gorg. Here I got the opportunity to watch two Maltese productions – Ewropej and Burning Bikinis. Ewropej consists of five short films: Viva Malta, Toxicity, Mov Bak Plijz, 84 Sheep and Entropy; and Burning Bikinis is a documentary produced by Aditus Foundation, a human rights NGO in Malta. My favourite screening of the night was Burning Bikinis. After the film there was a Q&A session for the audience, and the film makers from Aditus spoke about their main objectives and motivations behind making the documentary. They first thought about making the film when there was a lot of upset and debate about the burkini ban in France last year. This documentary follows the historic trail of the first feminist movements from the 1970s, and tells the story of the Maltese urban legend in which bikinis were bought in bulk and burnt in a public square in Malta in the 1960s. During this time several women were arrested in Malta and taken to court for wearing a bikini. Archbishop Mikiel Gonzi requested the then prime minister Borg Olivier to institute a special branch of the police force with the “exclusive function to safeguard public morality.”

The film makers commented that there is no feminist movement in Malta today, and one of the speakers in the documentary reflected on how there is a need to treat the causes, and not just the symptoms, of women’s inequality in Malta in this day and age, and how it is important to honour the legacy of these women from the 1950s to the 1980s. Divorce was legalized in Malta in 2011 (by a 53% vote in the referendum), there was massive upheaval last year surrounding debates on the legalization of emergency contraception, and abortion is still illegal here. The film makers added that when they were carrying out their research in the archives, and interviewing historians, feminists, social activists and catholicism experts, there was a lot of material from the 1950s to the 1980s, but a significant lull from the 1990s to the early 2000s.They also mentioned that they were unable to get anyone from the Catholic Church to comment on the documentary. However, when I scanned the audience for this documentary, I noticed that it was mainly comprised of young women. I remembered the Repeal the 8th protest back home, just as I listened to a Maltese phrase being used by one of the speakers in the documentary. She stated that, when the phrase is translated into English, it means ploughing through the water and continuing the fight, especially if the current is strong. Our voices are our driving force, and Irish and Maltese women have a lot of things in common when it comes to fighting against inequalities and the patriarchal policing of our bodies by the church, in this respect. The Q&A session sparked a lot of debate about these issues, and it was interesting to hear the opinions of local Maltese women on these inequalities. After the session wrapped up, I helped the other volunteers clean up, and then we formed a human chain and made our way to Herbert Ganado Gardens to mingle. All in all, it has been a productive week – we’ve been acclimatizing ourselves to the 30 degree heat, admiring the breathtaking scenery and historic monuments, marvelling at the laid-back attitude of the locals, listening to the frequent fireworks (and bingo sessions!), singing some memorable karaoke tunes, and sampling the famous Maltese paztizzi pastry and locally brewed Cisk beer. Yesterday we took a boat tour to Gozo with our two friends who came over for a week’s holiday, and during the week we’ll be attending more film festival events, reporting back on the Arts symposium, volunteering, job hunting, and moving into our maisonette. And now, I’m off to re-apply some of that sweet Factor 50 sunscreen. Till soon, dear virtual diary.