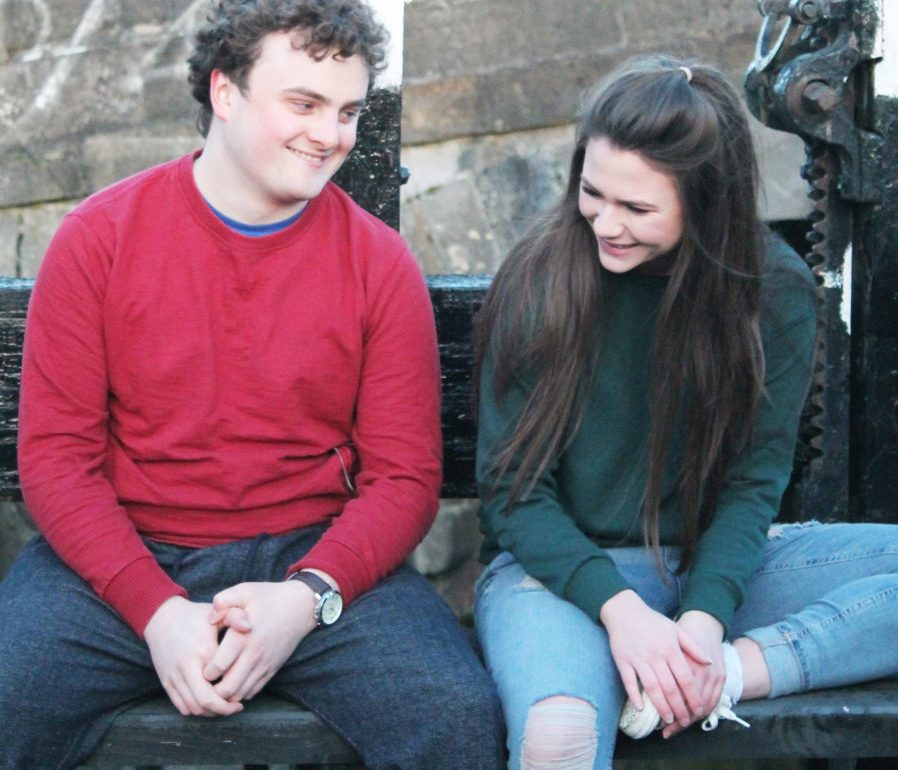 
Settling into the Bank of Ireland Theatre, under the soft glow of exposed light bulbs reflecting off ivy coiled around the stage, I get an immediate sense of a dream – something lighthearted and whimsical. Considering the play deals with two friends on divergent paths, yet still obsessed with Peter Pan, I begin to plot the play in my head and expect I might know what I’m about to see. But upon picking up the programme, and noticing the details of Jigsaw Galway and Samaritans listed on the back, I become aware of the fact this set dressing hides the stark fact this play does not deal with dreams, but the harsh reality of not achieving them.


The play focuses on Ashley (Niamh Ryan) and Darren (Denis Haugh), two friends that have just finished their Leaving Cert and are looking forward to what life has to offer them next. Very quickly however, Ryan’s writing takes these characters beyond generalisations and stereotype. Set against the backdrop of pre-drinking and a Leaving Cert trip to Spain, real senses of characters emerge for Ashley and Darren. Navigating a world of prevalent eating disorders, unrequited love and societal expectations, real weight is given to the experiences of the two friends.

Their stories cannot be dismissed as childish abandon, but are acknowledged and shown to be significant and impactful. Melding all this with frequent references to J.M. Barrie’s Peter Pan, the story of a boy that doesn’t want to grow up, a bittersweet tension is created. The distance between adolescence and adulthood has gone from a gap to a chasm, one that might be too far gone to cross.

Helping to solidify this are Ryan and Haugh themselves. For a show that has been performed several times over the past few years, there is no sense of it here, in a positive way. The script sounds fresh and urgent, Haugh guiding us in with a precise and dynamic handling of the script. The internal rhyme and structure of the writing never feels at odds with the 17 year old Ashley and Darren – these are their words, and Ryan and Haugh embody them fully and effectively. Both have standout moments and the play feels balanced between their perspectives.

Lighting, sound and costume (Kevin Murphy, Eibhleann Caffrey and Marie Hegarty respectively) also allows the play to negotiate the line between reality and dream effectively. A wash of blue light, club music flowing into the sound of a rushing river, and clothing that helps to ground yet elevate the characters, goes a long way in filling out the world of the play. It allows an audience many avenues to find their way into the play and keep them engaged throughout.

There is however a slight reliance on fantasy towards the end of the play, particularly after Ryan has just delivered a very powerful and affecting scene, deeply rooted in reality. The strength of this play is its ability to blend reality and fantasy in a way that questions both, and points at neither as the answer to the question of youth. Not to say the direction at the end of the play deracts from it, but blurring that line between what is known and unknown a little further could add further depth, to this already nuanced and powerful play.


In the programme note from Ryan, she states, “When you’re young, people often tell you that your problems don’t matter, that your school days are your best days and that your heartbreak can’t be real because you’re too young to possibly know what love it. I think a lot of the characters in this play would have fared a lot better if someone had just said, “I get it””. Ryan’s script, the performances and technical aspects of the show make it near impossible not to “get it” and the entire team has added a nuanced story to the overall narrative of youth in Ireland.


The show runs until May 6th as part of the Galway Theatre Festival in the Bank of Ireland Theatre on NUIG campus and can be purchased online at http://galwaytheatrefestival.com/eternal-youth/ or in person on the night.