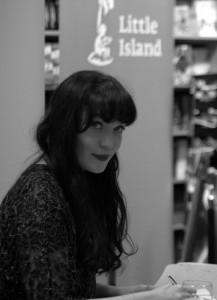 Deirdre Sullivan, along with Marie-Louise Fitzpatrick, Oisín McGann and Dave Rudden will appear at:

The festivals began at the end of March and will run into early May. The Irish writers and illustrators will also speak at the Irish Studies Department of Concordia University in Montréal, as part of their showcase. Ireland – being a small island – has proven successful in building strong relationships with international partners in the Arts. Children’s Books Ireland, for example, partnered with the Canada Council for the Arts and the Ottawa International Writers Festival, in 2016, bringing Canadian writers to Dublin to experience Irish culture and attend CBI’s Annual Conference. It is aimed that this current visit will build on that relationship.

Ireland is full of rich culture – the west has proven this when Galway was recently titled the European Capital of Culture 2020. However, it is a small island; therefore, exposure and funding is limited, which is why it is vital for Irish writers to expand their connections. The opportunity the selected four writers and illustrators will experience in Canada will not only create awareness of their writing and talent, but will also have an impact on their work.

I have been lucky enough to interview Deirdre, who is currently partaking in the literary festivals in Canada. Here’s what Deirdre had to say about her experience so far:

What does it mean for you to be selected to appear at three Canadian festivals?

First of all, it’s an honour. CBI is a brilliant organisation and the backbone of the children’s book community in Ireland, and the fact that they selected me, alongside Mary-Louise, Dave and Oisín is a real compliment. In terms of what it means to be in Canada, I’ve gotten the opportunity to engage with teachers, librarians, booksellers, academics and, most importantly, young writers and readers in another country. I’ve discovered two more Canadian children’s book writers whose work I love (Marianne Dubuc and Wesley King), and seen some very inspiring little details around the place, that are now hanging out in my notebook waiting for a story.

Do you think it’s important for Ireland to have connections to international partners in Arts (such as the Canadian Council for the Arts)?

I really do. We’re a small island, but our cultural impact has been huge, and we’ve left bits of our culture and heart all over the world. On our first day in Moncton, we happened across a famine memorial, and on our second day we met a Cork woman and her two beautiful Canadian-Irish daughters. Story binds people together, and forges warmth and respect. As the world shifts and changes, celebrating and sharing each other’s cultural heritage is hugely beneficial. The art a country makes burrows its way into your heart more easily the closer you get to it, I think.

It’s an incredible opportunity to showcase your work in Canada. How does it feel to be regarded as having work for young people which is of ‘world-class standard’?

I feel hugely privileged, and also aware I’m not alone. It’s a very exciting time for Irish children’s fiction at the moment, and I’m blessed to be part of it, as a reader and as a writer.  I’m grateful for this experience but I’m more grateful that I know more ‘world-class’ Irish writers, than I can count on both hands. People like Sarah Crossan, Siobhan Parkinson and the late Robert Dunbar have been so supportive of my writing.  I’m also aware of our fantastic and passionate librarians and booksellers, as well as organisations like CBI, Literature Ireland and The Arts Council.

It takes a village to get a book to readers. It’s not just one person making that happen, it’s a culture of excitement about books and stories …