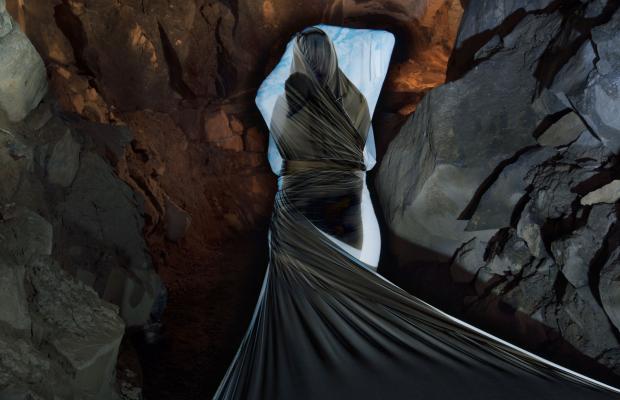 It is difficult not to be affected by the landscape of the Burren, in Co. Clare. The barren hostile landscape resists efforts to modernise and tame it. It remains wild and reminds us of the wild and ancient part of ourselves. I was reminded of these things  as I walked the Burren and went deep into the earth as I explored the caves across from the college before visiting the exhibition. The exhibition opened on Easter Saturday and the themes of birth,re-birth, death, the earth, identity and ritual were echoed in both the landscape and the exhibition.

Deal with this Shit…Angel Cray

Cray’s exhibition consists of five large black and white nude photo-portraits of the artist, each in its own space. Four larger than life photos occupy a room each, cave like. While the fifth smaller one, Don’t Be a Doormat is on the floor as one enters the exhibition space.

One cannot help but walk on it as you enter. It is almost overlooked and forgotten in the rush to see the larger works. Yet the title invites speculation. Is the artist welcoming us into her public/private space but is she afraid of losing herself in the process? Perhaps it is a metaphor for her fear of being unappreciated or rejected.

Drips, flicks and handprints on the photographs are echoed in paint on the wall around each print, framing them and increasing the size of each to monumental proportions. In each image the subject is surrounded by five distinct types of marks or motifs, one specific to each photograph. These marks are then repeated on the entire wall around each of the four large portraits.

In Arrogance, 2017 the artists’ body is mostly in shadow while she looks up slightly and away at something beyond the viewer. The photograph has been painted over with hand prints and they surround the painting on the supporting wall. Using wet hands the artist has dragged her hands over the photographic paper before exposure. The ghostly hand prints are reminiscent of ancient cave paintings and the human need to explore existence, identity and ‘making one’s mark’.

The artist appears both vulnerable and defiant in these images; yet they hint at the artist’s ‘other selves’; those parts of the artist that have yet to find expression.

Abstracted biomorphic landscapes are the subject matter of Nanfuka’s large scale oil paintings on canvas. One is drawn into each work through complex mark making, and intense colour. Each canvas is built up in complex layers of paint that is alternatively dripped, dragged, squirted and painted. Colour flows into others as paints with different viscosities and saturation to create some very beautiful passages on the painted surface.

Like the Abstract Expressionist painter Jackson Pollock, Nanfuka has added objects to her canvas; colourful material from her native Uganda and wool mix with the painted surface. Yet she takes this further and subtracts as well as adds to the canvas. The canvas’ are cut and ripped, with material, removed, re-positioned, added and stitched and re-stitched. Her canvas’ are in Rosenberg’s terms “an event” and “the marks on canvas are the records of immediate experience”. [i]

Circular forms are cut out and placed elsewhere on the painting.  While the artist was influenced by Ugandan rock art, her painting echo the marks made in Neolithic Irish art. Traces of rings and disks very similar to the ones found in Nanfuka’s work can be found on the Boheh Stone in Mayo and in Knowth, Co. Meath.

Part virgin, part saint, part chrysalis, part enigma; shrouded both figuratively and literally is how I would describe the work of Sherry Erskine.

In the three large digital photographs on silk, Clare-Voyance Triptych, 2017 one encounters themes of death and re-birth.  A figure is shrouded and in one print holds her hands apparently in prayer, while in the neighbours two, the shrouded figure is under white, diffused light, a metaphor for the Divine or the Higher Self.  I was reminded of renaissance images of Mary Magdalene, in particular Gerolamo Savolo’s 1530 painting Mary Magdalene[ii] when viewing them.  It is Mary Magdalene who discovers Christ is missing from the tomb. Perhaps Erskine has wrapped herself up in His discarded shroud in order to transform herself also into a transcendent, actualised version of herself.

The co-incidental circumstance of the exhibition’s opening on Easter Saturday added to this feeling of resurrection and transformation.  In Cocoon and The Imaginal Stage the artist is wrapped in a shroud in a cave; struggling/patiently waiting to emerge into someone whole, complete and free. Transformation cannot be forced.

Her video installation PsychoLoRama, is a collaboration with Bonnie Sue Stein and her husband K Erskine. The work was originally made in 1977 under the title, Gallery Gauze. With a grant it has been digitalized and informs her current work. Multiple, shadowy, shrouded figures move over several shimmering silk and convex reflective surfaces. One’s eyes slide from one shimmering surface to another shiny one, following these ghostly figures.

Barbara Dunne is an artist and writer living in Connemara Co. Galway