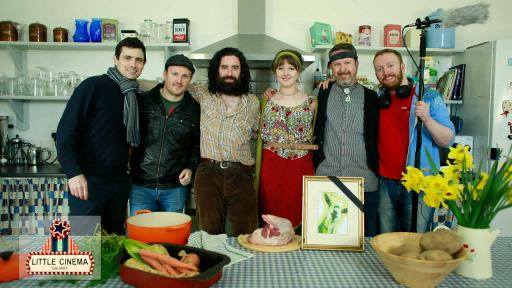 I recently had the opportunity to work with some actor and filmmaker friends of mine to turn a script I had written into a short film. It will premiere on Thursday, May 5th as part of Little Cinema’s ‘One-Take-First-Take Five Minute Film Showcase’ for the Galway Theatre Festival in An Taibhhearc at 8pm. My contribution to the show, “Stirring The Pot,” is the story of two hippies who attempt to prepare meat for the first time on their organic cooking vlog.

The film version of this story began as a one-act play for The Theatre Room Galway where I am a regular contributing writer and occasional supporting actor. The theme for March’s performance was “Revolution” and the challenge presented to me during the previous month’s writers’ workshop was to create a play that rebelled against the social norm that commands we ‘do not speak ill of the dead at their own funeral.’ To add to the fun, the genre I picked out of the hat was a cooking show.

First-time director Donnacha Bushe cast Yvette Picque and Robert Siberry to play the lead characters on stage. Robert was a last minute replacement for the original actor who fell ill the week before the show. This led to a less than exact reciting of the lines. But Yvette and Robert recovered brilliantly and the audience never noticed a thing. In fact, the quick thinking and professionalism of the actors, along with Donnacha’s decision to break the fourth wall and act as the ‘director/cinematographer’ for the play, gave me the idea to re-submit the script to Little Cinema for the One-Take show for the Theatre Festival.

Little Cinema co-founder, Kenny Gaughan, helped with suggestions in rewriting the original script to tighten it up for the new format. Kenny also acted as chief cinematographer and location manager. With the help of Patrick O’Connor, Kenny found the perfect location for our rustic kitchen set at Galway Glamping near Ballyglunin, County Galway. Fellow Little Cinema co-founder Liam Doherty on sound and cameraman Matt Kavanagh rounded out our tiny film crew.

Due to other acting commitments, Donnacha and Yvette were unable to be part of the film version of “Stirring the Pot.” And so I took over as director both behind the scenes and in the short itself. Yvonne Lydon took over the female lead role, alongside Robert reprising the male lead. I first worked with Yvonne when she starred brilliantly in the lead role of a one act murder mystery I wrote last year. It was and honor and a pleasure to work with such a great cast and crew.

While I haven’t seen the final cut of the film, yet, the rough edit by multi-talented Kenny is a delight. I highly recommend everyone go see the One-Take Little Cinema showcase on Thursday, May 5th at 8pm in An Taibhhearc for the Galway Theatre Festival. All the filmmakers involved in this show are creative and skilled artists. I’m fortunate to share the same screen as them.

When my wife and I moved to Ireland from the States three years ago, I never imagined that I’d be a part of the local arts community. And yet this is a big part of why I love Galway City so much. So many of the friends I have made here, I met through being fans of their work. I feel like I ‘stalked’ my way to befriending so many local musicians, writers, actors, directors, or editors.

The journey from blow-in to active member of the arts community began two years ago December, when I attended Little Cinema’s Christmas-themed show. As always, there were a number of great shorts, but what I remember most was the one that had a technical problem. It kept cutting out before the end of the film. After two attempts, Aaron Corless and Carla Maria (Tighe) Corless who wrote, filmed, and starred in the short re-enacted the final scene live.

I soon became a regular attendee to Galway’s monthly “open-mic-night for film makers.” I have since helped out some of the beautifully creative people involved in Little Cinema in a number of capacities, but “Stirring the Pot” is the first time one of my stories has made it to the silver screen.

I’ve taken courses in screenwriting in Seattle and here in Galway, but don’t have a lot of experience or skill in the technical aspect of film making. (I know just enough to know I don’t know what I’m doing.) Then about a year and a half ago one of the Little Cinema shorts was a promo for a new group in town: The Theatre Room, Galway. Similar to Little Cinema, Theatre Room puts on original, one act plays every month. Theatre Room began in the living rooms of the founding members every month. After the plays, writers get up to pitch the next month’s scripts and directors volunteer to take on the plays. Casting often begins that same evening.

I attended one such performance in the living room of one of the founding members, Luke Morgan, about a year ago. Luke and Mikey McCrory volunteered to co-direct my script and long story short: I won the inaugural Best Original Writing award (or ‘Roomie’) and am now on the steering committee for The Theatre Room.

The Theatre Room has grown in numbers and is always in search of larger venues. But on Monday, May 2nd at 5pm, we return to our living room roots with The Theatre Room Trail for the Galway Theatre Festival. Five, one-act plays will be performed in five locations around the city centre (three apartments, a pub, and the Spanish Arch). As always, it is free, but you will need to reserve a spot.

The opportunities and friendly collaboration of the artists already established in Galway is what allowed me to go from a fan to an author and filmmaker. This is the beauty of Galway City. It’s large enough to have a thriving art scene and yet small enough for it to be easily accessible by neophyte and seasoned veteran, alike.

For bookings of both the Little Cinema and Theatre Room performances for the Galway Theater Festival go to: http://galwaytheatrefestival.com/.

John Valters Paintner and his wife, Christine, moved to Ireland from the States three years ago. They run an online monastery, Abbey of the Arts, where they teach classes and lead in-person programmes on the interconnection of spirituality and the arts. In their free time, they write poetry and fiction.