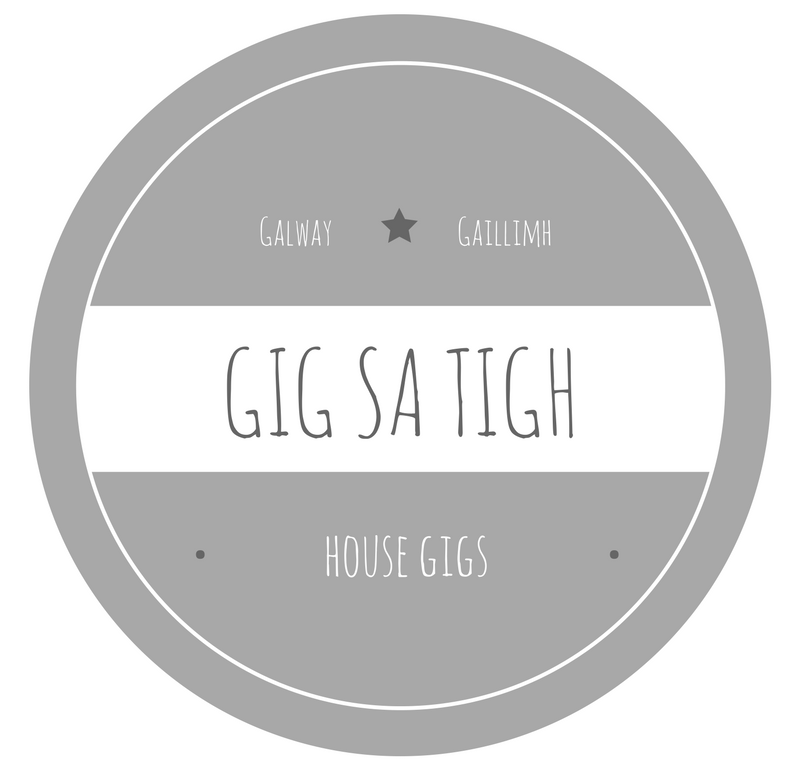 ‘Hey Folks! Its a beautiful day and we are excited to see you tonight at our small living room concert of New Pope and El Hodad! Gig Sa Tigh #1 will take place at *Secret address*. Make sure you arrive before 8pm. The music will start at 8:15 sharp and has to end by 10pm. If you’d like to come early and just hang out or jam you are more then welcome! Its a musician-friendly house!’

This is the message that greets you should you have clicked attending on ‘Gig Sa Tigh’s event on Facebook. The newly founded ‘pop-up gigging’ experience was the brainchild of Agu Jones. Born and raised in Poland, Agu moved to Galway from Czechia last summer after her partner was awarded a research grant at NUIG.

Agu’s project has brought something personal back to live music that is often lost in loud crowded bars. To put local and national talent in your living room and avail of ever changing spaces to set the atmosphere differently and uniquely for each set of performers. Although she says she can’t claim all the credit for the idea. ‘Where I come from house concerts are a thing at the moment. They are very common and especially popular amongst songwriters. I have a few friends who did whole tours playing only house gigs’.

Having participated as a performer on occasion, Agu began running her own nights in her tiny studio apartment in Prague. Upon arriving in Galway and realizing nobody was doing this, she leapt at the opportunity. ‘I felt like this is something that could be very beneficial for the local community, a way we can support original music without having to invest tons of money. And for me personally it was also a way to get to know local musicians, make new friends and enjoy beautiful concerts in my own living room. What more can I wish for?’

As of yet, Gig Sa Tigh has only taken place in Agu’s living room, however time goes on this could change. ‘My friends offered me their house as well- which is much bigger than ours. And probably at some point I will use their offer, when it makes sense for all parties involved. So far I haven’t even considered trying to find other houses. But if there are other people out there interested in hosting a concert in their home I am very open to any collaboration’

Having it in a living room, just inches away from the performers lends a raw and personal feel which Agu feels to be the making of Gig Sa Tigh.

‘The intimate atmosphere gets you really close to the musician and allows much deeper communication on both sides. When you sit on the floor in a living room packed with people who all came here mainly to listen to music, you can hear a pin drop.

And for an artist an attentive audience is the biggest reward he or she can get for their efforts. We, musicians, with the songs that we sing, we strip ourselves naked in public. Often, we sing about the most intimate experiences in our lives, our biggest joys and greatest fears. Every song is like taking off a piece of clothing until eventually you find yourself without a stitch in front of the audience. So, having even 5 people who really care, who respect you enough to stay silent, who listen to every word you sing, is an experience which I can only compare with requited love, and performing for these 5 people is so much better than a 100 people in a pub, where you have to fight hard for attention.’

This quirky idea is part of a larger Galwegian identity, something that Agu feels aided Galway’s successful Capital of Culture 2020 bid massively. Both for its originality, and the use of space for events that will stand Galway in good stead ahead of 2020, answering many critics who have suggested that Galway lacks the cultural infrastructure to host properly.

‘I don’t believe that big cultural infrastructure is the main criterion for choosing the European Capital of Culture. The cultural infrastructure doesn’t really have to be the city’s biggest strength for the city to be worthy of the title. Furthermore, infrastructure-wise, it is really unfair to compare Galway with a major European metropolis like Dublin, Paris, Prague or Berlin. If you look at the data, Galway seems to be one of the smallest, if not the smallest town, that has ever been chosen to hold the title of European City of Culture. I see the title more as a recognition from the European community of Galway’s cultural heritage’.

‘The European capital of culture to me is about the City’s spirit and the people that live here. Its history and present. What the place has to offer to those who live here and those who just come to visit. Galway is an amazingly vibrant City, whose spirit beautifully reflects the ideals of shared European values. No other European city I know deserves the title more than Galway. It has tons of cultural potential, and this potential has been recognized’

And for Agu, despite a lack of larger established venues than say the likes of Dublin or Cork, our culture does not rely on this. ‘If you think creatively, you will always find places that can temporarily be used as venues for the arts. Anything can serve as a venue really as long as you have an audience to play for’.

Despite disagreeing that a space need be specifically designed for cultural purposes, Agu still has great time for the plans of ‘An Áit Eile’, the Galway based culture blog who played a big part in landing the 2020 bid, who have their eyes set on opening ‘a dedicated multi-use cultural space for communities, groups, and people to come together and realise their artistic desires’. ‘I really like the holistic grassroots approach of An Ait Eile, encompassing and linking different strands of the city’s creativity, and I would love to be able to participate in my own small way in this cultural ferment’.

But before we even really begin thinking of 2020, Agu has Gig Sa Tigh as an example of how we can use different spaces in our City as platforms for culture and the arts. With the next few editions of Gig Sa Tigh already planned out. ‘In the upcoming show, we will host Let’s Set Sail, a band from Dublin. Later on in the year we’ll host the local indie-electronic producer WelFela, and in June we will have the pleasure to host Lynda Cullen from Cork and a later on a promising young band called JANAJ from Galway’. As you can tell, Agu intends on injecting plenty of life into living rooms across the City.