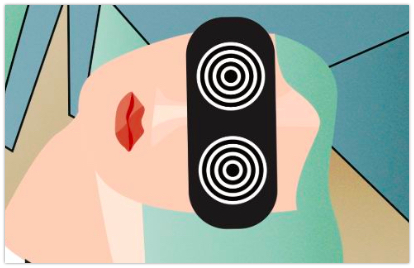 “Do the high numbers of mental health difficulties really point solely to individual biological or psychological imbalances, to be solved by that individual himself?” This is the first line of the blurb for Simulacra and Westworks Coproduction, Grand. It sounds like an academic analysis of a Black Mirror episode, which seems to be the overarching tone of the piece. Grand is an experimental play analysing mental health in the age of the internet through stylistically dystopian set and costume, elegant but repetitive movement pieces, out of place rap and nearly indecipherable freudian-esque monologues, all within the form of a cheery gameshow.

These often mismatched theatrical elements are forced together in a way that somewhat stifles the genuinely funny scenes and charismatic performances by the actors. Earning the badge of “experimental” comes mostly from the extensive movement work and the aggressive fourth wall breaking, with German expressionism splashed in grey in the futuristic shapeless costumes and sculptural pieces that make up the set, a feat of production designer Yvette Picque. This aesthetic, frequently interrupted by flutters of confetti from the cast, works well as a chic and dystopian background for our gameshow contestants.

This cruel competition pits players against each other, blinded with VR headsets to profess their knowledge of social customs and mental health solutions. The rules are not clear, the language of the piece is complicated and winding, but the tone is obvious. The play does not offer up meaning easily despite the enormous word count, but meaning is instead to be found in the actors’ abilities to lead us through the absurdity.

Leticia D. Ortiz, Yvonne Lydon, Brian O’Hanrahan and Ferdia Manning make up the cast, with Ortiz as our online gameshow host. She launches immediately into a scientific monologue, reflecting on the grim philosophical nature of modern living with a wide smile. The actors as contestants donned VR headsets, as though they themselves were video game characters. This is the first of many reasons I couldn’t help but sympathise for the actors – they had impossibly complicated monologues, including audience participation and a philosophy-heavy rap by O’Hanrahan that appeared out of the blue and was quickly forgotten. It sounded and looked like an amateur teenage rapper showing off to his bedroom mirror.

The tonal shift here was bizarre considering the video game like score that otherwise perfectly encompassed the dystopian tech atmosphere. Lydon’s delivery from privileged instagram girl to Artificial Intelligence robot was consistently hilarious and she mastered the movement alongside Ortiz which seemed a little beyond the capabilities of Manning and O’Hanrahan. However the latter two also contributed well to the charming humour and emotional delivery of what seemed otherwise like emotionally empty writing.

Ultimately, the writing fogs what it is trying to say about modern life – that people are not the cause of their own suffering and that digital society is a cancer for well being. The gameshow method is not unusual as a concept for conveying this kind of critique, showing the viciousness of humanity when confined to the internet for connection and self-actualisation, but we are given much more than a gameshow. The density of the language combined with the intense stretches of wordless dance and score throws the audience from hot to cold very starkly.

Movement features heavily throughout the piece. As the audience entered the Town Hall Studio, Lydon and Ortiz performed a looped movement piece resembling yoga or tai chi, a recurring motif throughout. Movement direction is provided by Conor Kennedy Burke, and while the choreography is unique and dynamic, it is leaned on quite heavily and possibly overused as an abstract and experimental break from accessible humour and character development.

The attempt at experimentalism is worthy at times, but unfortunately it is paired with elements that feel entirely the opposite: didactic and tangled with monologues that are too on the nose as they obliquely critique the technological age. They tried too much and fell short on impact. The piece has nuggets of brilliance but they were hidden deep. The robotic 80s-inspired aerobics combined with absurd commercial-style lines had me belly-laughing. However, as hard as I tried to engage in the thick layer of stylised science and dense poeticism that coated almost every monologue, I couldn’t feel for any of the characters beyond these endearing moments of comedy.

Unfortunately, the material felt messy and complicated without much reward, but the actors gave it their all to follow through with intense physical work and humour. The production, lighting and sound design were all aesthetic and creative successes but were overshadowed by the frantic activity of the actors grappling with the material. Grand had an air of trying very hard to be impactful, shocking and wise, which sadly distracted from any emotional elegance of the themes and performances.

Although the piece was not as impactful as the material could have been, I must admire the ambition of the two companies bringing formally unusual and experimental work to the independent theatre scene in Galway. Original, low-budget work is not easy and it is heartening to see companies such as these reach for absurdity as they try to convey a recognisably human problem.