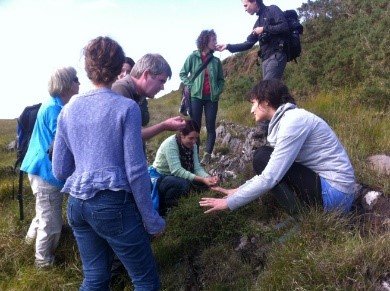 With a scientific background and little awareness of the ethical values for protecting the natural world, I can still remember finding the Green Sod Land Trust (now Green Sod Ireland) and being instantly intrigued. As an education officer and team member of this environmental charity for almost five years now, I’m delighted to have the opportunity to interview a Co-Founder of Green Sod Ireland, Melissa Griffith, so that we can share what we get up to, and what keeps us going.

Green Sod Ireland’s story is a very interesting and somewhat unusual story. The idea was conceived of when Galway City Council decided to remove 80% of the trees in Eyre Square in the early 2000s. The protracted ‘fight’ to Save the Trees, which ended with 30 trees being saved, led to a small group of people deciding that it would be better to be pro-active rather than re-active and so asked the question “What would you do if you knew you couldn’t fail” …..? Our answer was to protect land for its own sake and the sake of the species that live on it. Why would you want to protect land and its species you might well ask? Well, remember this was in the pitch of the Celtic tiger – land was at a premium and being commodified, being bought and sold for sites, to provide homes for 1 species only – ours, with little or no regard for the land itself or its inhabitants who also require homes. Something isn’t right about that. In 2007 Green Sod Ireland was granted Charitable Status and the work of putting things in place began. Great ideas and passion are necessary to get things done, but, as everyone knows, the work that goes on behind the scenes is phenomenal – even exhausting. We began to learn of all the networks available to us and sharing in this way helped us to grow. Volunteers began offering their services. Kelly Murray Accountants, Galway now Candor, and Liam Staunton, Solicitors also in Galway, offered their help free of charge, all of which helped Green Sod Ireland get up on its feet.

Can you explain what underpins Green Sod’s belief in the intrinsic value of nature and how this provides rationale for protecting all species?

A combination of intellectual/academic experiences and direct experiences with nature contributed to the development of an environmental ethic for Green Sod, an ethic in which the intrinsic value of all of life is cherished.  Philosophers and scientists, such as Arne Naess, Mary Midgley, James Lovelock, Stephen Harding, Aldo Leopold, Joseph Meeker, Fritjof Capra, Thomas Berry, Briam Swimme, and many more helped us put ‘words’ on the deep environmental concern and affiliation with nature we each experienced/felt in different ways, as we worked at setting up Green Sod. We believe in the intrinsic value of all of life, and in those early days found it hard to write about it, to formulate our thoughts. Now, however, 10 years on, in 2017, people, more and more acknowledge the fact that earth is a living, self-regulating organism, of which we are but one part; that we are all interconnected and that every living being has the right to thrive and flourish. That way of thinking is not new in the history of our consciousness, it is an ancient and widespread belief among indigenous people. It has simply been forgotten by western civilization, as we frantically pursue the idea that earth is a resource, there to serve our (human) needs alone. The most sophisticated modern science and philosophy, with the help of James Lovelock’s Gaia theory and the philosophy of Deep Ecology, are now beginning to affirm ancient wisdom, agreeing that earth is alive; planet Earth is a living, self-regulating supra-organism; an organism with a system of multiple organisms considered as a single organism, and that everything on earth is interconnected. Fortunately, the period in history where earth is treated like a machine is coming to an end. Our ancient ancestors were right and science is backing that up. Our call now is to attend, to respond, to express ourselves in the sure knowledge that we are intimately interconnected with the processes of nature that permeate all life forms. Green Sod Ireland has grown out of these ideas. We are part of the global shift in thinking from a totally human-centred way of seeing and acting to a more earth-centred approach.

Green Sod Ireland is a land trust, acquiring land for its own sake, and protecting its inhabitants from destruction. Can you tell us about the land that’s been gifted?

In 2010, the first piece of land was gifted to us. A man living in a beautiful part of County Carlow, near Hacketstown gifted his 7 acres and bountiful organic garden to Green Sod. He said he would die a happy man knowing that ‘all’ that he loved on his land would be safe for posterity. In 2013, our second piece of land in Salrock, Little Killary, Connemara, 14 acres, (home to the rare large marsh grasshopper) was gifted by a very visionary woman, Eileen Coyne. Our third piece of land, 25 acres in West Cork, also being gifted, is in the pipeline, as we speak. All this land is being managed to promote biodiversity and protect the homes of both rare and common species. Land for its own sake, irrespective of any need it may serve us – though we know that we are the ultimate beneficiaries – healthy planet, healthy people. What are some of your other achievements for Green Sod to date?

We have had many highlights in Green Sod that I could speak about. In 2011, we won a Social Entrepreneurs Ireland Elevator Award; 240 people applied that year; it was whittled down to 40 and then to 8 and we became one of 5 Elevator Award winners. This, needless to say was ‘life-changing’ in so many ways. For a start, we are on-going Alumni members of Social Entrepreneurs Ireland and receive a great deal of on-going support. I said at the start that Green Sod’s story is somewhat unusual – well, I was really talking about how graced with ‘gift’ the organisation is – and here is another unusual example of that. On foot of the SEI award I went to the UK for up-skilling, to Schumacher College in Devon. The course was on Organisational Complexity – what is that – I hear you say? I will explain that in a minute, firstly, I’ll tell you how we got in to it in Green Sod. British Telecom, Government officials, representatives from large international corporate businesses were there – a lot of big players were on this course and Green Sod… As happens with courses – a small group of us had to make a presentation to the larger group on how Complexity might be applied to a small organisation like Green Sod Ireland; after which, Professor Eve Mitleton-Kelly, course facilitator from the London School of Economics – said that she liked what Green Sod was doing and would like to come to Ireland to work with our team for a week, if we would like, free of charge – we did like…what a gift…. we couldn’t believe what a lucky stroke that was. She came in 2013 and NUI Galway facilitated her visit in every way possible. Professor Eve Mitleton-Kelly acts as on-going advisor to Green Sod since then (with no charge), as we grow the organisation according to the principles of Organisational Complexity.

Can you give us some idea of what Organisational Complexity is and how it fits with Green Sod?

First of all, I suggest you look up Professor Eve Mitleton-Kelly Director of Complexity at the London School of Economics where you will get articles and information about ‘Complexity’. I am not a ‘complexity’ expert! I am learning about it all the time. Complexity theory is based on the natural sciences. Understanding the complexity of nature and its systems and applying certain principles to the organisation means that Green Sod’s management structure is web-like (implies involvement and engagement) rather than the familiar model of ‘top-down’ management, so it is relational rather than corporate. We have a board of Directors who also participated in the Complexity training with Prof Eve Mitleton-Kelly. We know that organisations are complex social systems, by that I mean, one can plan and prepare all one likes, but you cannot guarantee a specific outcome. We operate under the principles of Complexity using what is known as ‘distributed leadership’ facilitating volunteers to find their place/role in the organisation, taking responsibility for what they do while working collaboratively with others. We get together to address a problem/issue by putting it in a ‘problem space’ – working on it in the ‘space of possibility’ thus ‘co-creating’ ‘an enabling environment’ and see what ‘emerges’ collaboratively. Complexity recognises and acknowledges that relationships are complex. Understanding this means we can facilitate collaboration, learning, innovation and sustainability or a new way.

Can you tell us about Green Sod Ireland’s ecological education programmes?

Proactively educating the public on the protection of Irish ecosystems is central to the group’s work. Our most recent education programmes (which you have co-created!); bee-friendly planting programme ‘Bee Aware’ and ecological art programme ‘Connect’, are available to all primary and secondary schools. Our Development Education programme ‘Be Bio Diverse’, which is delivered to Transition Year students, addresses Development Education themes such as biodiversity, climate change, organic principles and sustainability, has been running for the past several years. Green Sod’s education initiative ‘The Story of the Universe’ has been delivered in over 200 primary schools in the west of Ireland. And we also provide environmental studies for adults to promote ‘earth-centric’ thinking and ‘ecological literacy’. The Story of the Universe at Body & Soul 2015, Westmeath

What are some of your future hopes and visions for Green Sod?

We hope to continue growing the WildAcres over time. Green Sod will have WildAcres in every county in Ireland, with myriad species thriving and flourishing for their own sakes. Green Sod will continue to educate adults and children alike, in our unique and creative way, until we all ‘remember’ that we did not spring fully formed to dominate the planet, but rather evolved out of other life forms and are therefore intrinsically linked to all of creation. Everyone has their part to play.

How can people get involved?

People are welcome to join our exciting and growing team. Send an email to Jenny at greensodireland@gmail.com or phone 087 6324002 and Jenny will be happy to speak with you.

Thank you so much Melissa for taking the time to share Green Sod Ireland’s story!