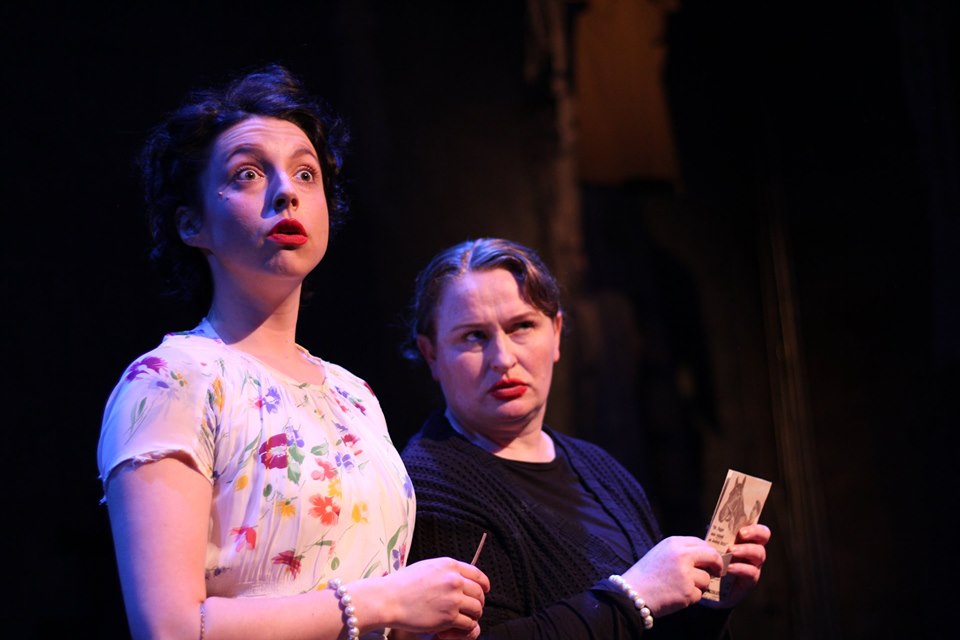 Are You There Una?

Written and Directed by Elaine Mears

The warm glow of nostalgia and storytelling shines in the Mick Lally Theatre this week with a tale of a woman whose name is familiar to Galwegians and its visitors: Una Taaffe of Taaffe’s shop, William Street.

As plays in Galway go, this one is as Galwegian as they come.

Sitting in the renowned Mick Lally Theatre on the opening night of Galway Theatre Festival 2019, I noticed the usual theatre-heads you would expect to see this week, who all know each other (and most likely the cast and crew) and who come out in droves to support the exciting endeavours of performance in our culturally rich city. The other half of the audience, I was delighted to see, were not as expected at an independent and local production such as this. Older Galwegians spoke proudly in the foyer about how they remembered Una’s eccentric kindness or harshness and laughed knowingly as they were reminded of the dog pee smell in Taaffe’s shop or Una’s messy red lipstick. Whether you remember her famed clothing shop and her presence there or you have noticed the empty spot where Taaffe’s once thrived on William Street, living in Galway will at some point offer you up the legend of Una Taaffe. However, this production gives us more than the dog pee and the lipstick- it is a tribute to her successes and her struggles, with a portrait so full of reality and myth alike that you will leave feeling you’ve known her yourself.

I was born and raised in Galway, but not long enough ago to remember Una or her shop.

Nevertheless, I have been aware of her for years, it seems almost a requirement as a Galwegian to know that the derelict shop front on our main street was once a huge source of fame and intrigue. Stripped of any signage, it is nonetheless still “Taaffe’s” to me and countless more I’m sure. Were I not so connected to Galway, I can’t promise this piece would have had the same impact, but to be sure, it is a technically proficient success as well as a sentimentally resonant experience.

Writer/director Elaine Mears showcases her hard work in piecing together the life of Una through archive, interviews and collected memories in this documentary theatre piece. It oozes with emotion and reflection while blending the theatrical aestheticism and documentary storytelling. Una is performed as a young woman and older woman by both Yvette Pique and Maire Daly respectively, and she is introduced to us by the narrator, a representation of Elaine Mears herself played by Catherine Denning. The duality and contradiction of Una herself is displayed elegantly by Picque and Daly, often moving and speaking in tandem to flesh out the beautiful, sad, lonely and vivacious figure of Una. Picque’s physical performance is gorgeously precise, funny and melancholic, giving us the glory days of Una’s life, where her life was full of promise and potential as a great beauty and a sharp businesswoman, and which sadly devolved into a kind of tragic solitude. Maire Daly’s Old Una presents the Una most people remember in all of her eccentricities and her failing mental health, but also portraying her caring generous spirit, which went unnoticed or unappreciated throughout her life. Daly is also a triumph of casting in her striking resemblance to Una, shown off as she parades around the stage with haughty wisdom and confidence.

Anna Mullarkey performs the live piano score with beautiful, echoing motifs filled with sadness and reverence running through almost every moment, combining with the pretty and nostalgic projected video design by Jennifer Cunningham. These two artists are so well respected and beloved in Galway’s current cultural landscape, their contributions seem fitting to a piece so adoring of Galway. Susan Collins’ subtle but effective lighting delicately complemented Cunningham’s video work which was beautiful in its own right, and neither of which overpowered the performers. The set and costume design recalling the heydays of Taaffe’s shop did well to evoke the sentimental nostalgia of the story while acknowledging the neglect and dereliction of the shop’s later years. It is worth noting the majority female creative team behind the piece, a worthy tribute to a formidable woman who’s defiance of traditional gender roles was to be admired in a time when she was certainly at a disadvantage as a woman, hindered and controlled by the men in her family too often.

The strong presence of the writer throughout the piece in Denning’s performance as well as in recorded interviews is at times intrusive and uneven. It almost feels as though we are reading Mears’ diary, where her own personality and emotions are the frame for the narrative. The writing almost assumes we know her already as she claims she connects to Una as an outcast, afraid of sharing Una’s loneliness and isolation, but without detail or explanation. At other times the writing sounds like an academic article, gathering evidence on the nature of her mental state and her pioneering work for the homeless services in Galway, putting forward a thesis on Una’s historical significance. The two approaches are jarringly different and at times feel at odds, but work together to connect the audience to the facts and the sentiments of Una’s story. I cannot deny that Are You There Una? is one of the most endearingly heartfelt and informative productions I have had the pleasure to experience in my hometown.

What is ultimately so moving about the play is that Una, whose family life and community tested her greatly and who faced criticism and ridicule up until her death and poorly attended funeral, was supported so wholeheartedly by the people of Galway this week. Her life was given a respectful, rather sentimental, and truly moving tribute by some of Galway’s best theatre makers. An enthusiastic standing ovation honored the cast and crew of this exceptional work, but really it honoured Una. I wish she could have seen it.

Are You There Una? runs as part of the Galway Theatre Festival until Monday 6th May.