How To Keep An Alien-Rough Magic 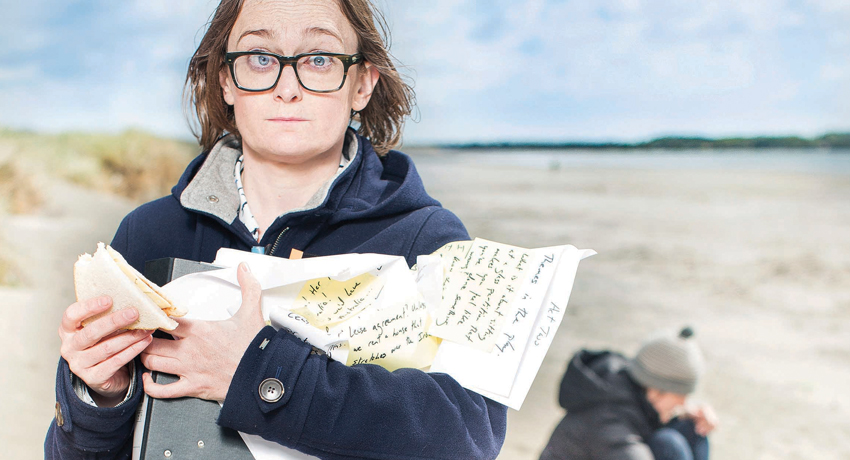 Sonya Kelly introduces herself as our ‘performer for the evening’ and also introduces Justin, her Stage Manager (though over the course of the evening he becomes much more). From the minute the show starts, we are on her side and we don’t leave it until the final curtain call with everyone on their feet, only silenced by Kelly’s polite announcement that there will be a post-show discussion if people want to stay, and for those who don’t, that’s fine too. But about 80% of people stay, such is our adulation and appreciation. How to Keep an Alien is a solid, well made, funny, witty, sweet show which is lovely, really lovely, but it doesn’t give much cause for imposing a contrary opinion as a reviewer.

Of course I could sidestep opinion and simply outline how she fell in love with an Australian Stage Manager called Kate and thrust the bureaucratic nightmare of a visa process and a long, long-distance relationship upon herself, but I just did that.

I could use Kate’s status as an immigrant in Ireland as an opportunity to discuss the refugee crisis and the on-going plight of refugees worldwide but I am woefully underqualified and far too lazy to start researching it to an extent that would do the topic justice.

But topical could be interesting, so, maybe the referendum for marriage equality? No, too obvious, and Kelly herself said in the post-show discussion that her play was not about being gay, it was about two people in a relationship wanting to be together. She also pointed out that the same visa red tape applies to gay and straight couples. Thanks Sonya. Another nail in the coffin of my brilliant review.

What about . . .  women comedians? In How to Keep an Alien, Kelly references her career as a stand-up. After meeting Kate during a rehearsal for a show, the two of them make so much craic out of the horror of the rehearsal process that Kelly falls over laughing and is advised by the choreographer to swop acting for comedy. Her comedic skills are apparent in her delivery, interaction with the crowd, physical comedy and sly looks to the audience. Let’s just say there was a lorra lorra LOLing (And let’s never say that again). Maybe I could compare her to Amy Schumer (so hot right now) and Maeve Higgins (also hot right now) and maybe then somehow bring in that film Suffragette? Why not just totally segue into feminizzzzzzzzzzzzzzzzzzzzzzzzzzzzzzzzzzzkjlrtwqtgfgbvx.

As I was saying. Comedians and women and things beginning with a capital f. But I don’t know if Kelly would like to get lumped in with a lot of other personalities, not least because of her declaration upon fear of meeting Kate’s family that: ‘I like people . . . They’re a good idea, in theory. I just like them slightly further away than most people like people. I like them in photographs.’ She’s a fairly unlumpable lady – self-deprecating but confident, intelligent but slightly ridiculous (who else could lie across a table and seduce you with the line ‘wanna come back to mine and check out my immersion?’), determined in her quest to get Kate permanent residency in Ireland, but reluctant in her commitment to meeting her family. She is a plethora of minorities winning hearts across Ireland on a loveable comedy rampage (I’m not sure if that is brilliant or outrageously offensive so, just in case, you’re welcome, and sorry).

How to Keep an Alien already has loads of stars from the Irish Times and various other publications, ones that people actually read. It played at Soho Theatre, London (and we all know that only important things happen in LANdon) as well as bloody Brisbane, and Kelly is a critically acclaimed writer and performer who received a Scotsman Fringe First in 2012 for The Wheelchair on my Face, a look back at her myopic childhood. So obviously you don’t need another person’s opinion shoehorned into another topic to make it, and Herr Reviewer, sound interesting.

There is no pretension in How to Keep an Alien. Sonya Kelly is Sonya Kelly. The comedy reels us in but the truth of the story really engages us. This is a love story. It is not a show about what it means to make a show. It doesn’t impose politics, it doesn’t have a set that is a metaphor,  and it almost doesn’t use a projector. And these are good things. It’s good to see a piece of theatre that works perfectly on the merits of good writing, good performing and lots of heart. How to Keep an Alien has these by the bucket-load. Unlike this review.

How To Keep An Alien was reviewed at Town Hall Theatre, Galway Tuesday 6th October. Touring nationwide until 27th November.