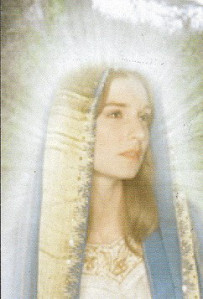 Did you know Sinéad O’Connor was a film star, once upon a time? Well, not quite a star, but she did appear in some movies. Her most famous role is as the Virgin Mary in Neil Jordan’s The Butcher Boy, an interesting role to take on, given her fractious relationship with the Catholic Church. I won’t say much now about this movie, except that if you haven’t seen it already, go check it out.

A much less well known movie, in which Sinéad also appears, is Hush a Bye Baby, a 1990 film written and directed by Margo Harkin. This film is ostensibly about growing up, following a group of teenagers being teenagers. But the British Army is very much in the background of everything they do. Goretti (great name!) and Ciarán begin courting, and Goretti (played by Emer McCourt, who also appeared in Riff-Raff, a Ken Loach movie with Robert Carlyle) finds out she is pregnant soon after Ciarán gets arrested for something he may or may not have done.  She has to hide the pregnancy from her family, while trying to get in contact with Ciaran.

Sinéad O’Connor’s role in this is quite small, (though she also wrote the score) but there is a nice scene where she dresses in a makeshift habit, mirroring her role in The Butcher Boy. And it’s always nice to be reminded of that classic wit that only Derry people could get away with. (The nickname they give the local playboy is ‘Clitoris Allsorts’, for example) It is hard to find, but it’s a great movie if you can get your hands on it.

Another film that deals with a kind of fear of pregnancy, is a movie called I Can’t, I Can’t. (1970) I was lucky enough to see it in the Cork Film Festival recently, and it was the first movie filmed in Ardmore Studios that was set (partially at least) in Ireland. After an Irish bride’s wedding day is marred by her mother’s death due to complications with a pregnancy, she struggles with the idea of consummating her marriage. With her doctor advising her to use contraception, and her priest forbidding it, this movie struck me as far ahead of its time in tackling this issue. It amazed me how relevant the movie remains, even after all these years. It deserves a wider audience, and with a print now held in the IFI, let’s keep our fingers crossed that it will reach that audience soon. (This movie also has a killer line that stuck with me: ‘John, you sound like such a Protestant.’)

It is interesting how I happened upon these films almost by accident, films which deserve attention today for their subject matter. The legality of abortion is still an issue today, one which has been addressed in movies going as far back as 1970. And I, for one, am of the opinion that film is the area of the arts best placed to deal with social issues while retaining the ability to reach a wide audience. The time may be right for a filmmaker to have another go at the issue. Until that happens though, try and find these movies. They are worth it.