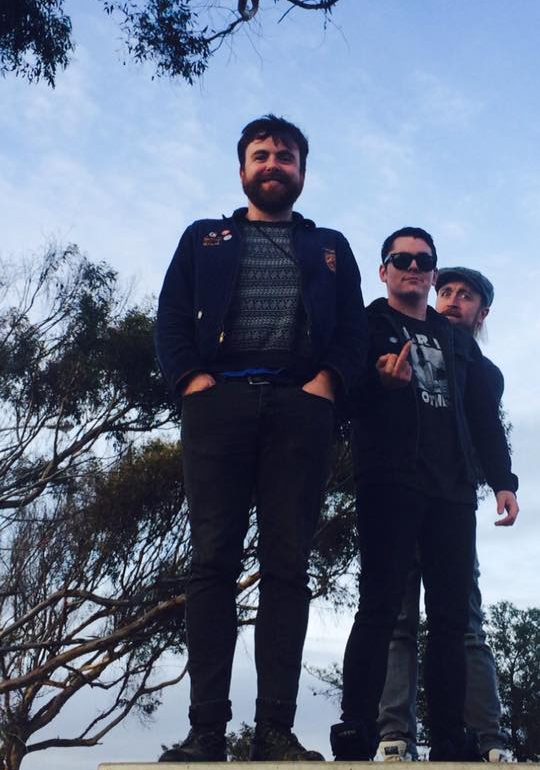 This is the story of why I got into music, what’s going on with it and how it relates to my life.

It is also the story of my journey to America, to play music in the country that inspired me.

The tour begins in San Diego, right by the Mexican border. Over the next two weeks our journey will take us from the deserts of Southern California to the pine forests of Washington State. Almost the entire length of the country. A journey of 1,225 miles, before you even consider the return leg.

Over in Tijuana they’re rioting about a governmental hike in gas prices but on this side of the great divide things are a bit more subdued for now. The evening sky is tropical purple and the weather cool.

The gig’s organiser has kindly allowed us to use his rehearsal space. We haven’t played together in months. Our last gig before leaving Ireland was a shambolic affair. Badly promoted, poorly attended and terribly executed. Far from being a triumphant send off it seemed we really had reached the end of the road. Three songs in I looked down and realised only one string on my guitar was in tune.

“Watch out America” I roared at the end to a few scattered laughs.

The show is in a place called the Tower Bar. An Aztec needle sticking up out of the trailer parks and liquor stores that surround it. We’re travelling light, everything but our instruments has to be borrowed. We drink some beers in the parking lot and I guzzle some cough syrup to protect my voice. The time off seems to have done us the world of good. We blast through our set. There’s a bit of leaping around in the audience and we make enough money to cover the day’s petrol. A small victory.

We have the next day off and spend it in La Mesa, the “Jewel of the hills” as its dubiously known. The place is a bit of a dump. Tour malaise sets in almost immediately and after a healthy breakfast of pancakes and bacon we hit the sauce. By the time the sun sets we’re properly lubricated and roll out of the motel looking for adventure. We find Karaoke. Jay heroically mangles “Kiss from a Rose” while I slaughter “Barbie Girl” with my girlfriend.

To celebrate our arrival in America I order a round of fireball whiskeys, a drink famously claimed to contain “excessive levels of propylene glycol,” an ingredient used in the deicing of airplanes. It thoroughly thaws us out anyways. Jay disappears into the night with a strange lady, I have a blazing row with my other half and Mosey wakes up in a strange van and has to be taken home by the police.

My time in pretty San Francisco has somewhat blinded me to the nature of America. Vast swathes of southern California are a wasteland of freeways, fast food restaurants and gas stations. Over and over you see the same things in slightly different configurations. You know the names and the logos of these places, anyone with a TV does. Denny’s, Ihop, Popeye’s, Pizza Hut, McDonald’s. Then another freeway, a Denny’s, a Pizza Hut, a Jack in the Box, a Wendy’s. On and on it goes, a copy and paste world without a center. It’s a landscape at once familiar, and yet utterly alien and nightmarish in its scope. Sprawl without history or culture or sense.

There are strip clubs the size of warehouses. Mexicans pull up in their monstrous trucks. Obese white people lumber by panting. Black people rifle through bins as though the apocalypse has already been and gone. And outside the fried chicken place, a group of men with Aztec and Native faces are chatting in the harsh strip lighting. They look like a vision from a bygone age, visitors from another century entirely.

The following night we play a beautiful old Speakeasy in Fullerton called the Continental Room. This is one of the better organised shows of the tour and the standard of the other bands is high. Afterwards it’s on to San Jose.

North of L.A. the land flat lines. It’s an eerie day, accentuated by the vast stillness and emptiness of the landscape we’re driving through. Nothing sky and nowhere land stretching on to the distant horizon. We pass a herd of cows so immense it staggers the eye. Thousands and thousands of the fuckers, all with that bored certainty-of-slaughter look in their eye and not a blade of grass between them. I wonder how many does it take to feed all those fast food chains we passed? How many of these will end up as the Whoppers and Big Mac’s we’ve been eating?

The gig in San Jose is a weird one and we find it difficult to connect with what little audience is there. The headliner is truly dire. An unknown hard rock act that insists on a set list so long even Bruce Springsteen would balk at it. Incredibly, they manage to clear the room twice, a feat I’ve never seen done before. The first set of drinkers jump ship only to be replaced by a new crowd who wisely do the same. Even the regulars leave. My abiding memory of the night is watching the guitarist pause in the middle of his fortieth solo to push the glasses back up his nose before recommencing the shred. We down our pints, smoke some weed and try to avoid any more conversations about Trump.

For the weekend we land in San Francisco, a place we sadly failed to secure a gig. We’ve reached the halfway point and I have to return to work to fund this madness. I get up at five in the morning in the pissing rain to catch the bus to a dark and unwelcoming ghetto to lug boxes around. After a week of drinking and playing music this leaves me practically suicidal and I fantasise about returning to Ireland just to get some sleep.

And that’s week one of the tour down folks, come back next week for Snowstorms, diarrhea and the great Northwest.

Farren Jecky is the vocalist and songwriter of Rural Savage and Otto & the Dix.  You can find all his recorded output at https://farrenjecky.bandcamp.com/

He also has a Youtube channel where he occasionally uploads music videos and other silly bits and bobbles.