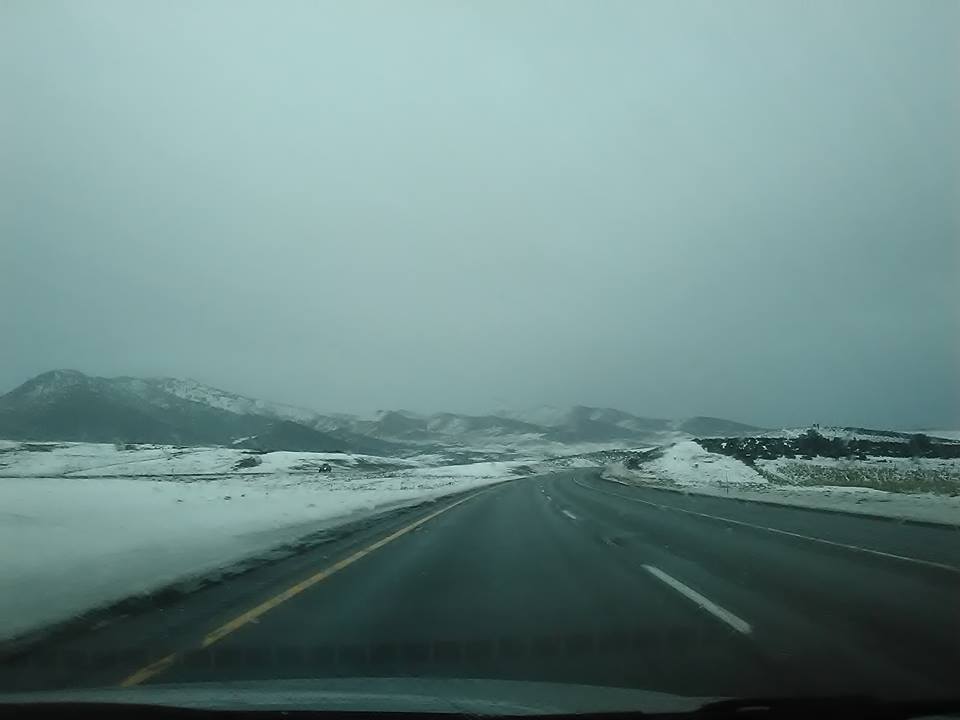 This is the story of why I got into music, what’s going on with it and how it relates to my life. It is also the story of my journey to America to play music in the country that inspired me.

We’re heading North now, our tiny car crossing the Golden Gate Bridge in the early morning. Out the window Alcatraz sits in the bay, half lost in the mist and rain. Past Sausalito and through San Rafael. At noon we cross a flooded plain, the sky and the land are united and our road is just a thread floating on a limitless ocean. The further we go the worse the weather gets. The sign for San Quentin flashes by. In 1969 Johnny Cash recorded one of his famous prison concerts here. Everywhere you look there is some piece of musical history waiting to be discovered. A word from a record you used to own, a town you recognize from a long ago lyric. But as you leave California behind the sound of the country changes. The endless summer of the Golden State fades away. A darker tone is in the air. You can see it in the jagged pine trees and feel it in the biting wind. Soon it will be the heavy land of Nirvana, the throat shredding roars of the Sonics, the delirious virtuosity of Jimi Hendrix.

The sun is lost and the road rises into black mountains. We climb up and up, higher and higher. There’s a storm coming and before long it’s bearing down on us. For hours it batters the vehicle furiously. The road becomes a river and down it we begin our treacherous slide into Oregon. Enormous trucks crowd us from all sides, moving cliffs that we slalom between while their wheels spit rain up into the windscreen. Suddenly the back of a car appears out of the tumult. We’re going to hit it. Time slows to a crawl. Jay grabs the wheel and we fishtail wildly across the lanes before he manages to wrestle it back under his control.

In Eugene ice and slush coats the pavement’s. We’re playing Old Nick’s pub, a roadside place near an overpass. “A dollar off beer for all Union Workers forever.” Our set is last and by the time we play it’s mostly cleared out. But the people here are good, they feel less flimsy than those further south, less full of shit. Tonight we forgo the anonymous motel and stay in a cute little hostel. Tomorrow it’s up through Olympia and on to Seattle.

When I was fourteen I read a cheap paperback biography of Kurt Cobain. I don’t even know where it came from, it just appeared in my life somehow. The early years of Nirvana were the most exciting for me. The young punk band out on the road, just happy to be playing, with no conception of the shadow fame and addiction would eventually cast on their lives. That book as much as anything sold me on the romance of getting “in the van.” Sitting in my room, playing my guitar to no one while the currents of time were rushing onwards to an unknowable point far in my future.

But in the end we didn’t make it to Olympia or Seattle and so the pilgrimage was never completed. life, as it tends to do, intervened in spectacular fashion.

A blizzard forces us off the road in Tigard, just outside Portland. The highways are closed and the Governor declares a state of Emergency. The eighteen wheelers which had been bombing past us in the mountains are now abandoned to the snow. We pull into a garage to get some air and try to plan our next move. I step out onto the ice and suddenly find myself airborne, dancing against gravity, trying desperately to grab hold of nothing at all. I come down hard on my leg, the pain is searing. Three things flash through my mind in quick succession: One, if it’s not broken it’s a fucking miracle, two, I want my mammy, and three, if Mosey doesn’t stop giggling I’m going to strangle the bastard.

But my problems are far from over. The impact has fairly rattled my bowels and now a weeks worth of beer and burritos desperately wants to escape through my arse. I hobble to the garage but it’s locked. Closed for the storm. Sweat breaks out on my brow, there’s not much time left. I feel like one of those fellas hunched over a bomb in a movie, watching helplessly as the timer counts to zero. Hissing in agony I shuffle behind the building and drop my jocks. But my leg is too injured to hunker down effectively so I have to prop my hole up against something to get the right angle. I just about manage it and then I let rip. The relief is glorious until I look up.

Don’t follow your teenage dreams. Because if you do, you may one day find yourself shiteing up against the side of a trailer while an American family watches in horror from their jeep.

There is no going forwards now. We head for Portland to wait for the next show. Its apocalyptic, the place is buried and the streets coated with a thick slab of ice. We crawl across the frozen city and bed down in a dirtbag motel.

The next day my leg is dead weight and it’s excruciating when I move. Considering the circumstances we’re not sure if the gig is even going ahead so we e-mail the venue. It is, so I bandage the ankle and Jay finds some crutches at a goodwill. Out into the cold night we march, battered and bruised.

It turns out to be the best show of the tour. The atmosphere is warm, receptive and it’s well attended. It sounds like some terrible metaphor but I can’t even feel the pain while we play. My voice feels strong. Afterwards, we make some new friends and they take us to a strip club where we screech like overexcited children, throw money at strange girls bums and drink till we pass out.

I’m not sure what to say about the return journey or how to wrap this whole enterprise up. The storm eventually cleared and we headed south again. A herculean driving effort on Jays part but a story for another time. Along the way we took a pitstop at a lonely mountain pass. Standing there surrounded by the stunning landscape I had a feeling of sweet sadness.

I’m not sure where I want to go from here, or if punk music is even something I want to continue playing. I’ve mellowed and transformed with age. It’s hard to let go of something that’s defined you for so long but I have to find that next thing that excites me. Just like everyone else does. It’s amazing to me that good friends of mine travelled thousands of miles to play music I created. Songs that sometimes had their genesis all those years ago, in that Donegal bedroom. Playing to no one but just imagining what was out there. And it is still out there, if you want to go and have a look for yourself.

I left the guys in San Francisco and they continued on to L.A. They had a flight to catch and I had work to do.  “Jesus I hope I never see you again bai” Jay whispered in my ear as we hugged goodbye.

We laughed and then I turned and walked away.

I hope you’ve enjoyed reading this short account of our adventures in America.

I’d like to give a big thanks to everyone who helped us out, especially Brian Kelly, Scabs from the Boreal, Old Nicks, Fake Awake, Heebie Jeebies, The Caravan Lounge, Ryan Platero and anyone who loaned us gear. It was impossible without ya. Also Dave Boland, Ado Lyons and all at An Ait Eile.

Rural Savage will be recording a third album if they can get around to it. In the mean time why not come over to www.Farrenjecky.Bandcamp.Com. Here you can find all the projects we’ve done and where I will be fairly regularly releasing new music, be it punk or whatever.