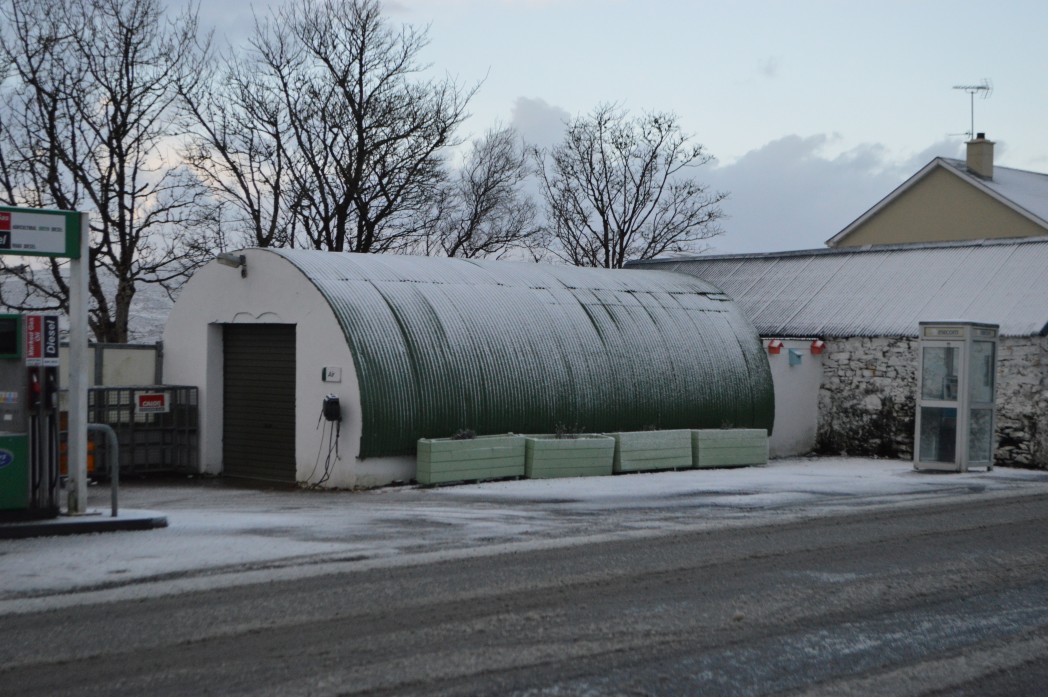 This is the story of why I got into music, what’s going on with it and how it relates to my life. It is also the story of my journey to America to play music in the country that inspired me.  I landed the day before Trump was elected as the forty-fifth president, I’ll be talking about that in the next one so watch out for that.

My love of music came from my father, this is how it came to him:  My father grew up in a small village in Donegal.  This was little more than a valley that faced the snowcapped Bluestacks, a few houses and two pubs.  The local priest wore a broad brimmed black hat and everywhere he went he carried a movie camera and a shotgun.  The shotgun was for shooting crows, the camera for shooting people.  In the early nineteen fifties Father John’s uncommon interest in the moving image led him to build a cinema for the community.  This was a long barreled hall they called the green cinema on account of its colour.  It had a tiered floor which was pretty revolutionary for the time, and every Sunday adults and children alike squeezed into oak benches and bentwood chairs to watch a film.  A beam of light shot across the room and images danced on the screen.  The most popular ones were the Elvis movies, which Fr. John was able to order from the military bases in the North.  This is how, with the blessings of God, rock n’ roll came to Donegal.

When I was sixteen I decided that if I could record a great punk album, I could die happy.  I vividly remember announcing this as we guzzled cider in the dark behind a wall or shed or wherever it was we were guzzling cider.  I don’t think anyone was listening.  When I was eighteen I received some compensation from an accident I’d been involved in.  With the money I received I bought myself a decent electric guitar and an eight-track digital recorder.  It became an obsession for me.  I had no style and no identity.  On one batch of early recordings I did a horrible impersonation of Bob Dylan, or Mark E. Smith on another.  On one particularly bewildering example I sang in a Scottish accent while playing an acoustic guitar over a techno backing, which is even worse and simultaneously less interesting than it sounds.  I wrote and recorded literally hundreds of songs, but it was about three or four years before I ever wrote anything good.  I’ve never been one to let a lack of discernible talent slow me down, why bother?  Music for me then consisted of writing something in the dead of night, recording it and then throwing it up on Myspace where it could be forgotten or ignored.  It’s a joke these days but there was a time when Myspace was actually an interesting little place for bedroom musicians and hobbyists. Like a lot of people, I went to Galway for a party and never left.  Last time I checked the party is still going on.  We lived in heatless houses, slept fully clothed in sleeping bags and still saw our breath in the morning.  We slept through the days, drank through the nights and ran up and down the streets screaming and laughing and going nowhere.  We sat around kitchen tables with guitars hammering away till our fingers bled, sharing the songs we’d written, revealing ourselves, testing things out.  People came and went, rooms were filled and emptied, it was a shit time and a great time, hard to endure but you’d miss it when it was gone.  Back then in Galway a band could play the Cellar, Cuba, Sally Long’s, DeBurgo’s, The Town House, Monroe’s, Kelly’s and the Róisín Dubh.  Some of them even paid you sometimes! Now, six or seven years later only the Róisín hosts anything with any regularity.  You get paid in beer and you have it drank before you even leave the building.

Most of the musicians I knew at that time were true dreamers, weirdo kids from nowhere towns.  They had raw talent and never thought beyond the song.  They had no tools, no support, no scope of what was necessary to develop, to get ahead and to make sure that endless party on the west coast didn’t one day swallow them up entirely.  All bands should really have a long, serious talk about what they’re going to commit to and what they’re willing to give up to get where they need to be. They have to honestly appraise how they sound and appear to an audience and answer all sorts of uncomfortable questions about the role image plays in musical success.  Most bands never do, never will, Irish bands don’t even know how.  I certainly don’t.

I don’t know when I decided to leave Galway, it crept up on me over the years.  The writing had been on the wall but I was very good at ignoring it.  People were grappling with the world of growing responsibilities.  The sessions had long ended, songs were made in isolation, they came slower and they were empty, they were easy to dismiss.  On a personal level which I feel uncomfortable admitting, I felt mired in personal failure and my once bountiful creativity was drying up.  My chosen life had led me to a place that didn’t seem to have any future.  So you might ask why I or any of those musicians goes on, why we continue to play and struggle onwards with nothing but some vague notions of opportunity or redemption or decline ahead of us.  Like most people, I wish I could say my future is anything but a blind roll of the dice but it’s really not.  I still play music because I love music.  It’s as simple as that.  I still haven’t made that great album yet either.  Alright I’m off for a bottle of a cider, I need inspiration.  See you soon.

Farren Jecky is the singer and songwriter of Rural Savage, Otto & the Dix as well as various other bedroom music projects.  He sometimes writes things when he’s not doing that.

You can find all his released output at: