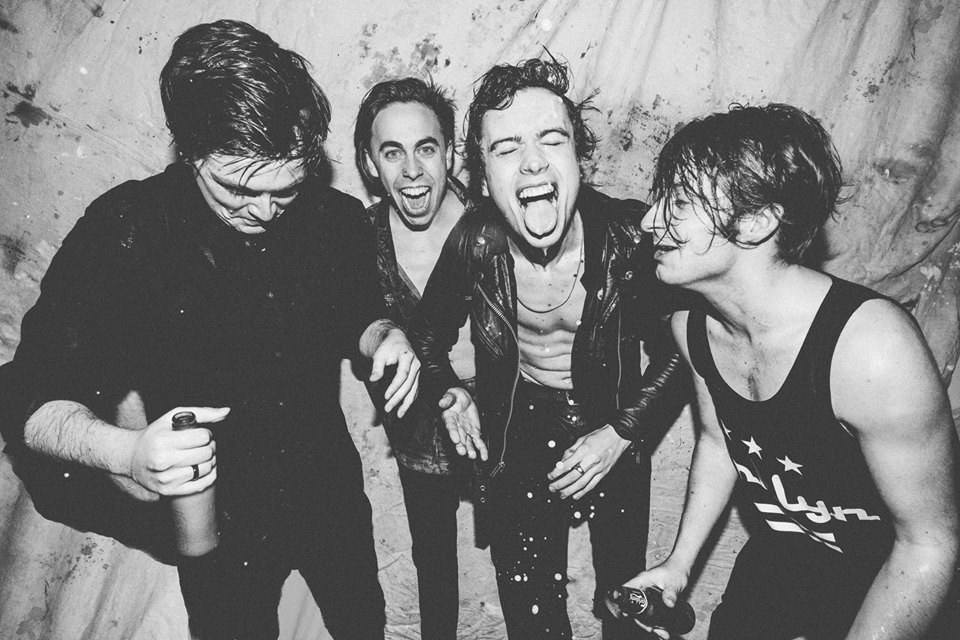 OTHERKIN are a Dublin based act described by Artrocker magazine as “A must see band who bring optimistic rock back to the clubs”. Their debut EP, The 201, was released on Rubyworks and they have just been announced for this year’s prestigious Other Voices festival in Dingle.

Eoin Hynes caught up with them before their recent Róisín Dubh show on November 7th. They return to the same venue on December 17th.

So I’m here with Connor and Luke from Otherkin, just before their gig in the Roisín Dubh. How are you getting on lads?

Connor: We’re doing very good. Great to be back in Galway!
So, date number three of the tour, starting in London, how have the first two shows been?

Luke: We played London something like two nights ago, and then we had to fly back the morning after we played at like 8 o’clock, it was grim. Then we had The Grand Social show last night, it was amazing! It was packed out, loads of people, loads of energy. Everyone sweating buckets! It was a good time. And then yeah, just looking forward to playing the Roisin again. It’s always a good spot for us so we’re glad to be back.
I noticed with the Irish dates, there’s no Cork, no Belfast. Obviously Dublin is a hometown show, but was there anything in particular that made ye go ‘We want to play the Roisín!’ or was it just how things worked out?

Connor: There’s a good few people who have kind of followed us from Galway and I think our manager and booking agent was telling us the best route for us was to do a Dublin and Galway show. That’s probably where the majority of our fans would be. But I think later on maybe around December we’ll be doing some dates around the country too, as soon as we announce it but yeah we’ll be doing that.

Luke: We’ll probably be back in Galway too!

Was it logistics that made you have to go to London, come back, then fly back again so soon?

Luke: It was a case that we’d made bookings for certain things. So like, the show that we did in London was part of Radio X, which is kind of similar to something like TXFM here. And they have an exposure festival so they asked us to play as kind of an emerging act. We’d already booked The Grand Social but we considered it a good opportunity, so we just figured we could do both y’know? And what better way to kick off a tour than going between countries!
So this is all off the back of the release of the 201 EP. What can you tell us about that? Where did you do it and who did you record with?

Connor: We recorded with this guy Dave Prendergast. He’s in a band based in Dublin as well called Overhead The Albatross. Great guy, we’ve worked with him before on I think our first kind of demo we ever did before. Great working relationship, great producer, really nice studio to work in. And it just really suited our band and our sound. He gets us, y’know? So it’s just a really really nice fit for us and we thought ‘if something works, why go anywhere else?’.
And obviously the first track on the EP ‘Ay Ay’ has been massive. It’s seemingly having a dig at industry types who want bands to dumb down their sound for the radio. Is it weird then having it be so successful on the radio and hearing it as a soundtrack to a Rimmel add with Mick Jagger’s daughter?

Both: Yeah!
Luke: It is kind of unusual, there’s kind of a bitter irony to it. But I mean, we only have ourselves to blame because we paired a lyric kind of criticising these songs that are engineered to be successful on the radio to arguably our song that is most likely to be featured on the radio. As in like, it’s got a lot of hooks and it’s got an easy catchy chorus. I think we kind of did that conciously too. We wrote the lyrics with this song in mind. And yeah I think it’s been one of those things, it just kind of took off. It’s toungue in cheek I suppose!
Connor: I also think it’s kind of good as well to, not educate people, but to let people know that that is sort of what happens as well. So from our point of view, it is a grungy poppy song, but at the same time, despite it being on the radio everyone else is kind of like, well yeah there is actually that other side to it that there might be something that has more artistry that isn’t looked at which you might actually prefer.
Luke: Yeah, that’s exactly it there! He said what I was trying to say
.

Connor: So yeah it’s definitely good to give people an insight into how it is as a band, and the more ears the better from my point of view.
I have to ask about your halloween costumes (KISS makeup and berets). Did it take much effort or was it just painting each others faces for the evening?

Luke: Considering it came together like the day before halloween, we tend to leave things quite late, it actually didn’t require a huge amount of effort. Our bassist (David Anthony) when it comes to these kind of things will take the reigns and really push these whacky ideas forward. So he picked all the costumes, I literally had to just sit there, drink some beer and get my face painted. Then next thing you know I was Gene Simmons!
Connor: It went swimmingly! A lot of people came up to us and they got it; French Kiss!
Luke: Even though we didn’t have the baugettes as we’d originally intended.

Connor: That was the one missing part.
Which is the venue or city you’re really looking forward to on the tour?

Luke: Club NME in Coventry actually we’re looking forward to, I think it’s the biggest venue we’ll be playing.
Connor: Yeah it’s quite a big capacity.
Luke: maybe 800 people?
Connor: 800 people capacity and obviously to be associated with NME is great for us. Huge fan of the magazine and there’s been many bands before us that we admire that have gone through that so we’ve been happy to contribute to that. And I think the people that’ll be at that will receive us well too which is quite exciting.
Luke: It’s just going to be a great way to see a country but not from a touristy side. Like we literally have to go to every corner of the UK to play these shows so it’s kind of a cool way to see the touristy side, but also the kind of ‘undiscovered’ townlands that nobody goes near. Maybe for good reason, we’ll find out!
Connor: Who knows?
That’s probably the rougher side of the ‘glamourous’ tour lifestyle as some percieve it?

Luke: Yeah true! But it’s cool, I don’t mind that we’ll just play absolutely everywhere because I think it’s very important to get on the ground and convert people in a live setting because y’know you can listen to a song on the internet and be like ‘this is cool’ and you’ll forget about it ten minutes later. But if you see someone live that really blows your tits off that’ll hopefully stick with them and next time we come back they’ll hopefully return.
Connor: We pride ourselves on our live show too. We work really hard at it and we want to entertain and we want to build a connection with our fans. And going to a new country you’re starting from the bottom up. You have to make that impression and that’s what we intend to do.

Any plans once the tour is over? A week off just to sleep?