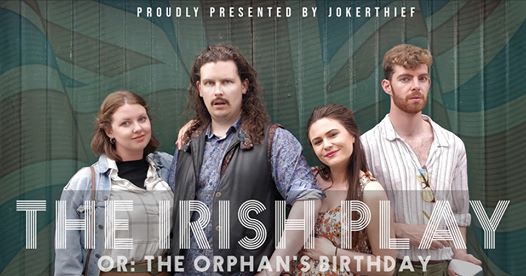 In this comedy of political errors, an American writes about an English man with an Irish identity. Cian (Shane Gaffney), a budding playwright trying to make it with his play, also entitled The Irish Play, has a very elevated sense of his own destiny and bases his play’s lead character on the rough and ready flatmate Liam (Oisin Linnane). Liam is harsh, quick-witted and explosive Dub. Liam is a budding IRA member and the titular orphan, whose terribly posh English girlfriend Suzy (Yvonne Lydon), a bleeding heart philanthropist and incurably kind soul, intends to follow him to the North to experience The Troubles alongside him and help wherever she can. Cian’s girlfriend Nora (Niamh Ryan) is pregnant (out of wedlock, god forbid, in Ireland of the 1970s) and hiding it from her family, she tries to put some structure onto the messy Dublin flat where their group drinks and bickers, and to make sense of the country into which she will bring a child.

This motley crew takes a while to get used to in act one, but the unique and odd characters are well drawn, complex but made clear by the diverse performances of the actors and the creative and dynamic direction by Denis Haugh, all with incredibly different styles of comedy in particular. Gaffney is calm and foolishly earnest, Linnane is clownish and quick, Ryan is a kind of all-knowing, outraged observer, and Lydon is emotional with amazing timing. Lydon’s entrance as Suzy is one of the best I’ve seen, as she arrives to the flat holding a terrible mistake and a life-altering secret, she is shockingly funny but with measured energy, not overdoing the outrageousness that the production harnesses well throughout.

Outside of comedy, where they play delves into the sadness of war, family and a backwards nation exploiting its citizens, somewhat forced comparisons are drawn to Cian’s American experience of the Vietnam war. A valid comparison to make, for the sake of the characters, but the reality of the two wars differ hugely, and this play largely ignores the complexities of this, a pretty bad failing for an otherwise successful political play.

On the other hand, some of the serious scenes had shining moments. Lydon lifts the genuine emotion that plagues her character, Suzy, to powerful heights especially in her contemplative moments and in the (sadly few) moments alone with her female cast mate, Niamh Ryan. Ryan plays a kind of mother to all and a political chorus-figure as she waxes lyrical on the state of the country. Ryan’s lines are occasionally overly didactic as she explains in too much exposition how Ireland’s political and economic state is dooming its citizens. This diatribe is intelligent but beats you over the head with it somewhat. Thankfully, Ryan’s delivery is steady and understated and saved the writing from the possibility of political melodrama, even as the play jaunts through farce and slapstick. Ryan’s earnestly sad or troubled moments, particularly as she reads a letter from a friend trapped in a Magdalene laundry, are stirring.  I was waiting for this scene, something that would counteract the time-period accurate sexism peppered through the writing – “the man of the house must protect his woman” sort of thing. But once again, Lydon and Ryan’s characters are far from tokenistic females thanks to their hilarious delivery and real emotion.

The broad and almost slapstick comedy in Linnane’s character is contrasted starkly in Gaffney’s role as poetic playwright, naive american, and neglectful boyfriend to Nora. Personally, I find a play that relies on accents from the actors makes me nervous, I worry that I’ll be listening out for every slip, but Gaffney’s American accent never wavered. Had I not known that Gaffney was Irish, I would have wondered how they brought an american man from the 70s onto the Nun’s Island stage. The costumes, by Zita McLoughlin, also perfectly place us in the varied youth culture of 1970s. The mustaches and Liam’s leather waistcoat in particular seemed right out of a smoky Irish pub. Peter Shine and Feargal Power play an IRA member and Nora’s father respectively, for just one scene each. The play until the second act is so centred on the antics of the main four characters that the shock of other characters arriving added well to frightening impact of each of their arrivals.

Our real-life playwright, Tim McGillicuddy, writes this piece about Ireland like he’s got something to prove – that he understands and has studied the history and people of Ireland and has spent at least some time here, that he’s not a blow in like the writer character Cian who takes McGillicuddy’s place in this fourth-wall breaking comedy.

The play deals in stereotypes and broad declarations of national identity, sure, but what saves the generalising cliches or over-romanticised verses of black-humoured poetic jokes is the constant fourth wall breaking and comedic farce. The play is not exactly steeped in realism, an interesting move for a play so based in history and politics, but it works. This play deals with the big questions of Ireland’s political history and national identity in some drawn-out monologues, but these are saved by the farcical, self-aware ridiculousness of the performances and genuine talent of the actors to create this dysfunctional but undeniably lovable foursome.

The Irish Play, Or: The Orphan’s Birthday tours to Sean O’Casey Theatre, Dublin  from Tuesday 10th to Friday 14th September.