Live Review: It Must Have Been Dubh @ The R 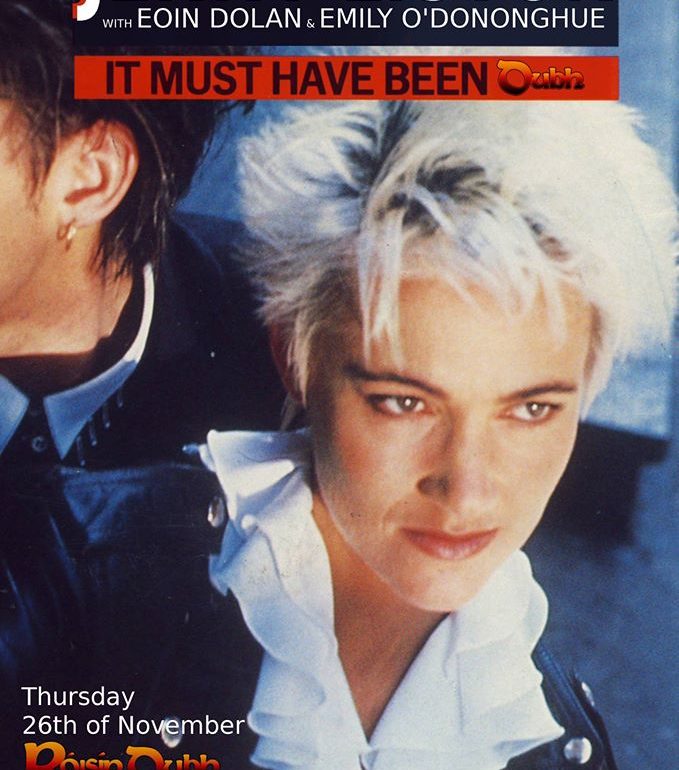 Live Review: It Must Have Been Dubh @ The Róisín Dubh, Thursday 26th November, 2015.

Last night was my first taste of the new monthly event hosted by Open-Mic host, singer-songwriter and all-round local legend, Steven Sharpe. It was a gorgeous night of intimacy, laughs and beautiful music. The line up on the night consisted of a debut performance from Emily O’Donoghue and a headline slot which saw the return of a travelling troubadour, Galway’s Prodigal Daughter, Jenny Liston. Sandwiched in between those was a thoroughly enjoyable set from Eoin Dolan and his band of Robin Van Der Klooster and James Casserly, whom were celebrating the release of their single “Something Good” – a song which was one of the highlights of the night.

The debutante opened the proceedings with a very honest set. She sang and played to a captivated audience which, despite still being modest in size at this early stage of the night, listened intently and seemed to be enthralled. The most noticeable thing about Emily O’Donoghue is her voice; it’s raspy but incredibly strong and dabbled with operatic-like skill. Her guitar skills were also quite impressive with heavy blues and soul influences, highlighted by a fantastic rendition of Jimi Hendrix. As an artist who is new to the gigging circuit, it was no surprise for O’Donoghue to exhibit some nervousness – nerves which seemed to be calmed by the inclusion of a handful of covers in her set. But this anxiety only heightened the fragility and heart-break of her beautifully crafted original compositions. Emily O’Donoghue is definitely one to watch; if she can produce further original songs and lyrics that are on par with the handful of songs she has already written then I wouldn’t be surprised to be hearing a lot more of her fantastic voice around the Galway and national music scene.

Eoin Dolan followed with a wonderfully charming and upbeat set. For some strange reason I never realised quite how good Eoin Dolan was until this week. His EP, Placid Ocean, was released over a year ago and seemed to go unnoticed until David Boland, of New Pope and The Depravations fame, shot a moody and nostalgic short-film to accompany the music. It was through watching this video that I finally appreciated Dolan’s smooth melodies and sometimes-witty lyrics which seem to juxtapose so perfectly with the darker tones of the music. Joined by percussion and bass, Dolan switched between guitar and keys with the briefest of breaks so that he could pack as many songs as possible into his set. His low-key, smooth vocals are perfect for the acoustic surf-pop vibe of the songs and the simple drums allowed the bass grooves and Eoin’s melodic piano and guitar lines to shine through.

The night was capped off with the excellent Jenny Liston, accompanied by her ultra-talented guitarist Micael O Connor. Whilst not as easy-listening as the previous act, Liston writes very unique songs that perfectly match her traditional Irish vocals. Her voice is hauntingly shrill but, oddly, sweet and smooth at the same time. The harmonies provided by O Connor were stunning, and the lyrical content of the songs was quite enchanting. The structure and composition of all of the songs were quite similar, but Liston cut through this with a fantastic new song that had a much livelier tempo and a more exciting tone. She finished off her set with an á capella, traditional Irish song, leaving the room silent and mesmerised.

There was a tip-jar passed around the audience throughout the night to give it a little something back to the acts that had provided the entertainment for the night, and I was delighted to find it weighty and rattling with change at the end of the night. No more than this collection of eclectic acts deserves. Sharpe is taking a break from this monthly gig in December, so the next edition will be on January 28th and will feature Donal McConnon of My Fellow Sponges, Samyel and Liam Doherty. That’s upstairs in The Róisín Dubh, 9PM, Free in.