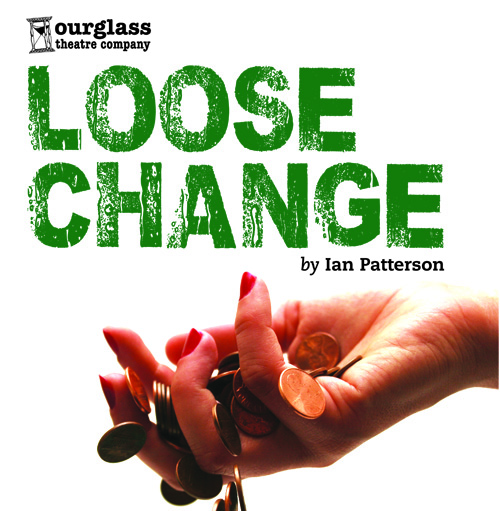 Nearly 6 months since its debut run in Galway’s Town Hall Studio, Ian Patterson’s Loose Change makes a welcome return to the stage with a production that is polished, energetic and accessible. The play comprises of three one-acts – Soft Landing, Sorted and Best and Brightest, whose plotlines are all set against the backdrop of the onset of recession in Ireland.

Despite the subject of the financial crash being a realm tackled by many Irish poets and authors since 2008, Soft Landing feels surprisingly fresh. What is set up as a boring drawl on the stock market collapse quickly turns into something more substantial: a compelling study of human interaction between nervous young Sally (played by Sharon Prendeville) and an eclectically dressed artist (played by Ian Patterson). The result is a humorous power-play between the two characters, presided over by Sally’s intimidating boss May (played by Colette Devaney). While the weakest of the three plays, Soft Landing’s conclusion is unexpected and sure to last in your memory for a long time.

The most resonating of the three acts follows quickly on its heels. The scenario of Sorted is set up quickly and efficiently – two brothers, one a Garda Officer (Vinnie, played by PJ Moore) and the other a struggling actor (Ray, played by Ian Patterson) – arrive at their mother’s house in order to convince her to move to a nursing home. The acting here is at top notch, with Moore, Patterson and Frieda McGrath all channelling the smooth rhythm of the script with a rare subtlety and skill. It would be easy to forget that the character of Ray is played by the same person who just minutes earlier was discussing Connemara landscape paintings in a bank.

Best and Brightest, the play’s final act, is its most original. Here, a fired university professor making a living by illicitly writing essays for students, has his ego challenged when a mature student Sinead (played by Collete Devaney) arrives and tells him that the lecturers have begun to oust his service. The characters here are well drawn, and the writing, coupled with flawless performances, evokes humour, intrigue and pathos over a relatively short period of time.

The drawbacks, although minor, include a laziness with props (a scratch card, revealed to the audience, is clearly unscratched; pieces of paper that should contain text are blank) and some risky lighting design. Best and Brightest sees its players spend nearly 5 minutes in almost pitch-black darkness; an annoying decision, considering Devaney and Patterson’s extraordinarily expressive faces.

All in all, Loose Change offers audiences superb performances and quick-witted, innovative writing. The stories, while brief, are worth more than the sum of their parts. “Money, so they say, is the root of all evil today,” sings David Gilmour during the intervals for each act, bundling the production together under a common strife that anyone can relate to. However loose, your change is better spent on this than on most things.

Article by The Diskin Reviewer

Check out the promo video here