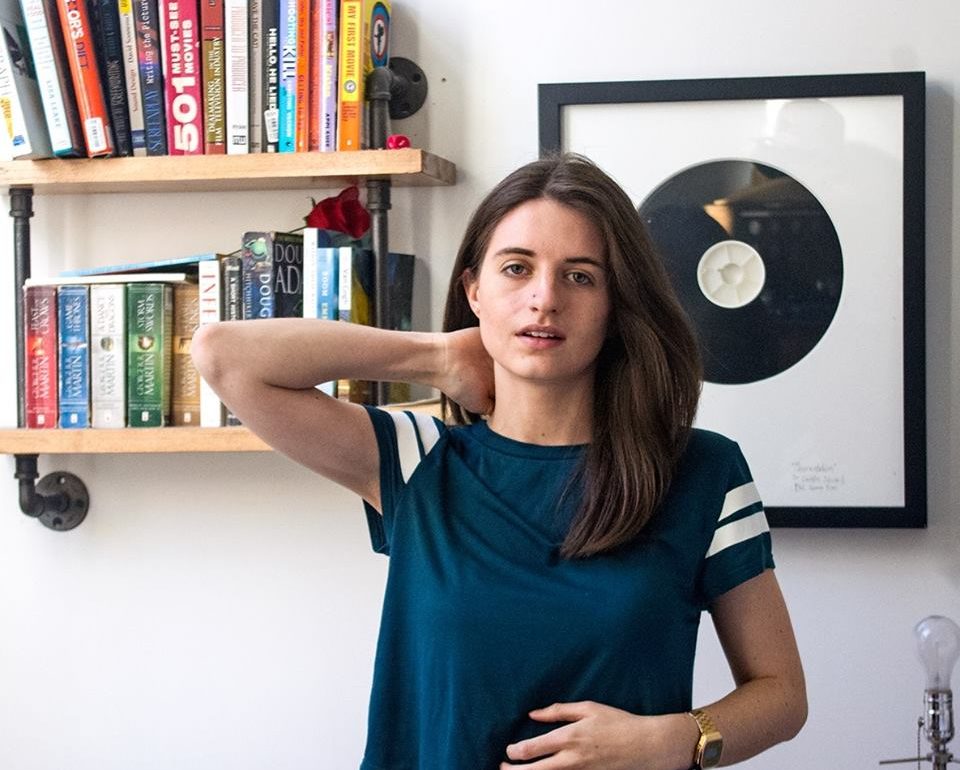 Lydia Ford is a Mayo born singer-songwriter currently based in New York City. Lydia kick-started her music career by recording her first EP, Hearts on Sleeves, in her childhood bedroom and is truly a home-grown talent. In 2012 she released her second EP, Taking Shortcuts, to critical acclaim and has since gone on to support the Delorentos on their ‘Bullet in a Gun’ tour. Her newly released song ‘Don’t Let Me Go’ was featured as New Song of the Day on JOE.ie and is available now on Spotify.

Tell us a little about yourself and how your music career began.

Sure! I’m a 23-year-old singer-songwriter from Mayo living in Brooklyn with two great roommates and our cat, Benny. My go-to bio line is usually ‘digital nerd and aspiring pop star’ which I think sums me up pretty well. I work in digital advertising and social media during the day and write music at night.

I started playing guitar at about nine years old and began writing songs as soon as I could string some chords together. I kept it all a secret until I had a music practical at school that I didn’t expect and ended up playing one of my own songs out of sheer panic. From there, I made my first EP in my bedroom and that was followed by a second [Taking Shortcuts] a couple of years later with help from Mayo County Council and their Music Recording Assistance Award. I’m currently writing and playing live music as much as possible. If you could describe your music in three words what would they be?

That’s tough! I guess…mellow, pop, and honest. I definitely try to be honest with my music.

What are the biggest influences on your music right now?

Right now I feel like I’m at a very transitional period in my life and moving to New York has definitely impacted my sound and even how I approach writing. I have been listening to a lot more electronic music and trying to incorporate that a bit. I met an amazing musician here who introduced me to a new world of sounds you can make in your bedroom and I’m enjoying putting more focus on the production of songs instead of just “here’s me, here’s the guitar”.

I have always loved pop music so I’m still jamming out to Tove Lo and an artist called Hayley Kiyoko. Avril Lavigne was the reason I picked up a guitar so she will always have a special place in my heart, even if I don’t wear ties and skateboard anymore.

Do you feel that growing up in the West of Ireland has had an impact on your work?

It definitely did, but maybe not in the way that you would expect.

I grew up in Castlebar so I wasn’t physically isolated, but figuring out my sexuality in rural Ireland at age fifteen or sixteen was tough. Most of the songs I wrote at that time are about unrequited love and struggling to accept that I was gay. I would spend hours alone in my room writing diaries and songs detailing every little interaction I had with my crushes. I felt pretty distanced from the lives my friends were leading and it’s definitely reflected in my music.

I also ended up playing in rock bands for most of my teenage years because that was the music everyone else was playing in the West. It was not something I was particularly good at or enjoyed and it took me a long time to be like you know what, I’m going to write these acoustic songs and I don’t need a drummer and a bassist and all that back up.

There are some great artists coming out of the West lately, like Maria Kelly and The New Social, and I’m incredibly proud that it’s where I grew up. How does the music scene in Ireland compare to that of New York?

The scale is the main difference, but day to day is similar. You make friends with other artists through playing gigs or mutual friends and just go out and support each other. If I go to someone’s show, they come to mine. It’s a little community in a big city.

There’s probably a lot more hip-hop and ambient music coming from here than at home so that’s cool. I’m still very new to the scene but I love it so far. I struggled to really get involved in the scene at home, but that was purely down to lack of confidence on my part. I ended up playing in the Hard Rock Café in Temple Bar and little coffee shops instead of the usual haunts.

Even though I have been out for years, I was always a little reluctant in Ireland to talk about dating girls on stage and write music with gender specific pronouns. Yes, we passed marriage equality, but there’s still a sense of otherness. It’s so normal in New York and the circles I move in which is the biggest relief. I can be like “this next song is about a girl I met once and fell in love with, because that’s what lesbians do” and not worry that someone’s going to misinterpret the joke and have my Mam sit me down for a talk!

Do you have any upcoming gigs or events we should look out for?

I’m working on booking some more shows in New York and the next is June 4th at Rockwood Music Hall. I’m also working on a new EP, which I hope to release by the summer. It’s a slow process but I really want to make sure it’s something I’m proud of.

‘Don’t Let Me Go’, is kind go a teaser of what’s to come. My last release came out in 2012 and I remember Hot Press described me as “green as they come”, which is definitely accurate, I was eighteen, but I was so embarrassed! This next record is hopefully more mature and confident.

To find out more about Lydia Ford check out her website here: www.lydiafordmusic.com