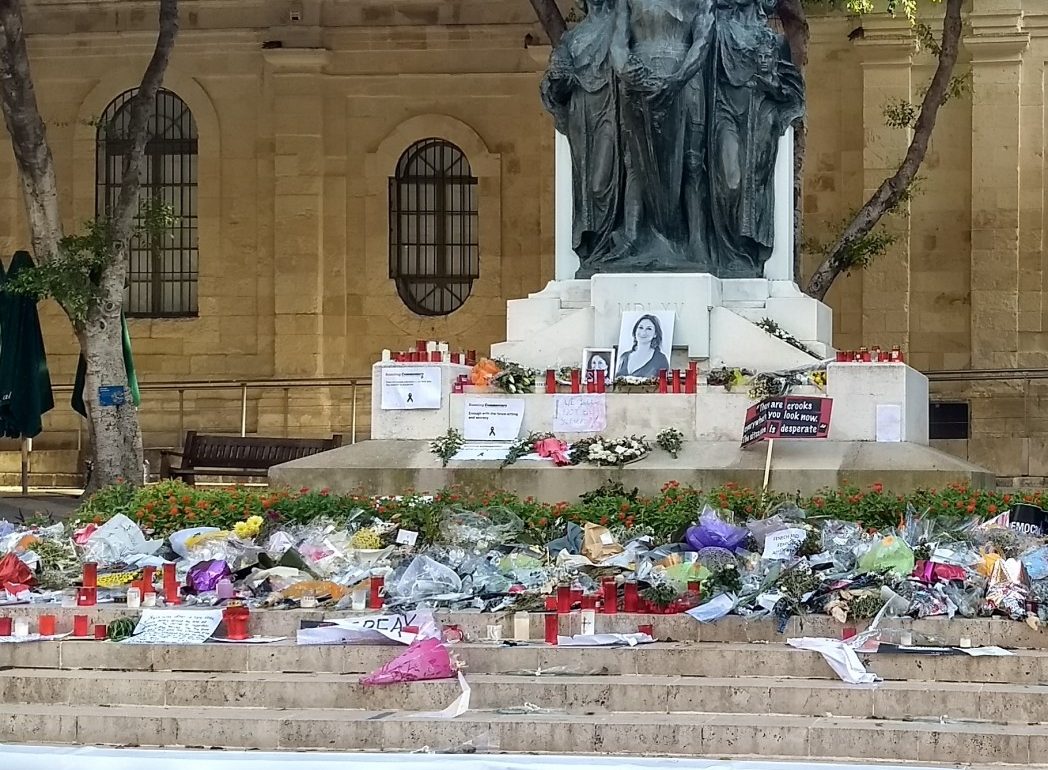 To summarise the last few months in Malta needs one word: Uncertainty. None of us have ever lived in a place or time where ideas, plans, decisions, jobs, accommodation, everything is so constantly in flux. Every time we think we have a handle on things, are about to settle into a bit of a routine, something comes along and changes everything.

Since we last wrote, the butcher is now a bartender, the waiter is also a bartender, the computer programmer was almost a bellhop, one of the group went home (we miss you Megan!), and has been temporarily replaced by another (read about his arrival here), Another has just left (goodbye Conor!). We’ve had visitors over. We also moved house again, which is a whole story in itself, and we’ll be moving again before the month is out! We are constantly questioning everything: What are we doing with our lives? Are we making the most of this experience? Should we be doing something different, more? How long are we here for? What are we going to do next? Between working, eating and drinking, sightseeing, and the constant questions, it’s an exciting but physically and mentally exhausting way of living.

Aside from the archival work at St James Cavalier (which you can read about here) I did a bit of freelance copywriting for the gambling industry- which in Malta is referred to as the ‘iGaming’ Industry (Don’t you dare call it gambling, it’s just good entertaining fun for all ages dontya know!). For a few of us Malta has also been our first experience of working in the service and hospitality industry, and between us we’ve now worked in a selection of high end restaurants, Irish bars and tourist trap cafe’s. We’ve had to get used to standing on our feet for 6-8 hours (or 12 if you have a double shift), getting scolded for standing idle for more than 2 seconds, talking orders from a 17 year old whose dad owns the business, finally learning how to open a bottle of wine properly, and which side the knives and forks are actually supposed to be on (not just guessing whatever looks right). There’s a million small rules, and a million opportunities to fuck up slightly – from falling on your arse on day one, and getting caught stealing a pastizzi because they made you work all through lunch and you were shtarved, to things like not putting enough sugar in the sugar jar, or frothing the cappuccino milk quite right, to someone else dropping a pint and blaming you because ‘the glass was slippy’, or just generally getting blamed for anything and everything cos you’re the ‘new guy’. It can be a frustrating experience, made even harder by navigating the thick Maltese accents. But, as with anything the more you do it, the easier it gets, there’s logic to the rules, and a place for everything, and as you start to learn where everything is, a lot of it becomes second nature. Many of our friends in the creative industry have been supplementing their practice with this kind of work for years. For us, It’s been a learning experience! It has also been interesting to hear the stories from other staff; we’ve talked to Serbians who are not yet EU citizens but have arrived in Malta looking for a better life. They are often working 2 or 3 jobs and 60-70 hours a week, saving money so that they can bring partners, wives, children over too. We’ve talked to Maltese people who have grown up on the island and seen their country change dramatically in recent years, for better and worse. And we’ve talked to others, from diverse backgrounds who, like ourselves have come to Malta looking for the good weather, culture, and a different way of life.

There’s a housing crisis in Malta. It is a tiny island, with only so much space, and like Galway, the price of renting a place has skyrocketed but some Maltese people have seen their rents double or triple in the last couple of years. So, like many, many others, we had a bit of an ordeal renting a house in Malta, and had a run in with a crazy landlady and shady enough estate agents. We had our initial reservations when we were about to sign the rental contract and had agreed the price and suddenly the estate agent told us the landlady was going to get a cleaner of her choice to come around regularly, that we would be billed for this on top of the rent. So basically we could be paying one of her friends to check up on us constantly, and adding a good chunk to already high rent. Anyway we said no, and it was agreed we’d keep the place clean obviously and get a cleaner ourselves if necessary and that was that. Or so we thought. The landlady arrived without any notice 3 days in (claiming she couldn’t get through to our Irish mobiles) but clearly just checking up on us, and barged into the house on the pretense of checking some minor thing with the fridge. When she came around to collect the rent after the first month, she inspected all the rooms. She lifted up the bedsheets to check the mattresses and went mad that we had taken the plastic wrap off the new mattresses. We’re not talking removing a mattress protector here, (there was one on top too) we’re talking about the initial packaging. I know people can be a bit particular about protecting their stuff, but expecting us to sleep on a plastic sheet in 37 degrees heat was madness. Anyway, at that point we were realising we made a mistake moving in there, and the location was a bit too far out for us so we wanted out of there. We had our opportunity when we found out the estate agent had told us only one or two of us needed to sign the contract, and then lied to the landlady about how many of us were there so the contract was void. After a week of stressful negotiations, we lost about half our deposit but got our agency fee back. Agencies in Malta charge a month’s rent as a fee for setting up the contract: 50% to the landlady, 50% to the tenant, an issue contributing to the rising rents in Malta as agencies want higher rents and therefore higher agency fees. We moved on, lesson learned.

Our current place is brand new, clean, in a great central location, and the landlord seems like a nice guy living over on Gozo. However there’s construction work going on above us and all around us. Also, because they are still building above us they can’t connect a wi-fi box to the roof so we’ve been limited to internet on our phones. You can’t win!

What we’ve been up to

It hasn’t been all stress and work, and one great thing about the weather is the freedom it gives you to spend time outdoors. Although I have to say, the scenery isn’t a patch on home – plant some more trees would ye! (the view to the left is a very rare patch of nature on the island). Being able to go for a swim at a beautiful sunny beach in October has its obvious perks, but even say you have an hour to kill, you can sit in a park and read a book or sit outside at a little cafe, you don’t have to constantly worry about finding shelter, getting from a to b as quickly as possible. In Ireland, most people’s lives are built around work and home. I spent most of my time indoors, maybe making an effort and go for a the odd walk but easily sitting and watching 5 or 6 hours of TV a night. Here, a night in watching TV is a choice, not the default. There’s lots of free or cheap things to do. During the summer we went to an outdoor screening of the film Amelie in a public plaza, another week that same space was an artisan market and before that the Science Festival had taken over the space with exhibits and demonstrations from young students. You can stroll around and you’ll find something interesting to do.

At the end of the summer we met the local Outdoor Artists group, a non-profit NGO set up to promote arts and culture in Malta. They run Creative Networking events for artists, publish articles by local writers, and host fundraising events such as ‘Gypsy’ a night of music art and storytelling to raise funds to create incentives for artists and help artists with financial and social problems. We told them all about An Áit Eile and discussed a potential collaboration in the future.

We went swimming in the sea in October, and enjoyed seeing the scorched beige earth turn to a healthy shade of green as the grass returned and the temperature cooled. We also took a boat trip over to Birgu, we attended the Malta Book Fair, where we found it great to see so many emerging and established companies publishing great books in both Maltese and English. In October we also went to Notte Bianca, Malta’s equivalent of culture night when most of the city’s cultural and heritage institutions host special events and open for free on the night. As part of the celebrations we had some wine and listened to jazz on the streets, saw some pretty cool glass sculptures in a water fountain, attended a rave in an old fort, had fun with an interactive music installation, and finally went to visit the spectacular St Paul’s Co-Cathedral. Last week we also visited a Duck Village!

Another thing that’s happened recently here is the murder of Maltese investigative journalist Daphne Caruana Galizia who was killed in a car bomb on the 16th October. Galizia had been an anti-corruption activist and outspoken critic of many Maltese politicians. Her death has made international headlines but it’s interesting seeing the story unfold on the ground. People are angry, but very few are shocked. I’ve heard people say things like “What did she expect with the Mafia running the country?!” and I’d previously heard stories of bribes, last minute building permits and high profile business contracts being issued the day before elections. On the day of her death posters of her face went up around the University calling for justice and the right to free speech. Her son Matthew issued a graphic and emotional statement saying ”This was no ordinary murder and it was not tragic…  We are a people at war against the state and organised crime, which have become indistinguishable”. Since then a tribute of flowers and messages of support have been laid out in Valletta City centre, and protests have been held in Valletta and Sliema. Her family are suing the Police. Hundreds attended her funeral on Friday 3rd November. We’ve seen graffiti popping up across the country with slogans such as ‘We will not be silenced – RIP Daphne’. It seems as though before her death, corruption in Malta was a commonly accepted fact, an everyday part of life on the Maltese islands. Now people are calling out for something to be done about it.

It will be interesting to see what the future holds for Malta and for ourselves, because right now, we don’t have a clue what’s going to happen.