‘Marcus Marcus and the Hurting Heart’ by Rab S. Fulton 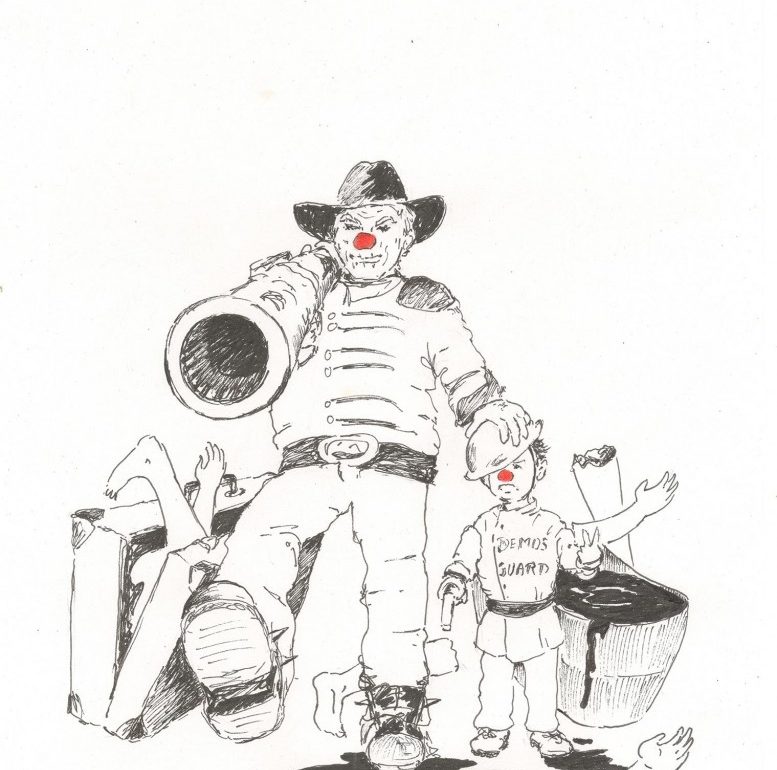 Ever an optimist, I say my prayers, make my offerings, with never a worry that the great Divinities may, even just once, be a little too busy to take heed of me. Why should They ignore me? Nobody else does. My personal wealth matches the economy of many a star system. Not only am I one of the nine Princes controlling En-Feshqa – its land, sea, air and surrounding satellite and rocket-ship packed space – I’m also a genuine living legend. Stars! I am famous throughout the entire volume of the Three Zones of Humanity.

Yet fame and money are not enough – or so say many obscure and impoverished philosophers. And perhaps it’s true; maybe there really is a void in the guts of every man like a black hole threatening to suck him in and smash and rip him into nothingness unless he strives to bung the gap up with other stuff, like charitable deeds and a sense of worthiness. Perhaps this is all so, but any niggling traces of existential doubt I may have suffered quickly vanished, like grime sand-blasted from a granite wall, by the sheer vast mind blowing experience of visiting Glaik City for the twenty-fifth anniversary of my ascension to the throne.

With its eighty three million souls, Glaik is not only the biggest city in the Sejan dominions – stretching from the icy Northern Marches to the cultural melting pot of The Harbour in the tropical south – but by far the greatest on En-Feshqa and throughout the entire stretch of The League Unsundered. It is only in the larger two of the Three Zones of Humanity, Demos and Heim-Y-Ard, that greater conurbations can be found. But if Glaik fails to match the size of some of those, it more than matches them in terms of the energy and exuberance of its political, economic and cultural life. As entry port for The League Unsundered, Glaik is never at rest. Even during its rare quiet moments, it twitches with potent expectancy like the muscles and nerves of some great jungle cat stalking its prey.

The very air of Glaik City is alive, imprinted as it is with the scents of foods from a thousand cultures; the reek of human sweat, perfumes, aerosols, farts and burps; the throat-choking stench of animal shit expelled by frightened cows, sheep, monkeys, cats, elephants, whatever, as they are led to holy slaughter in the innumerable local temples; the warm gusts of sandalwood, myrrh and frankincense mingling with the eye-itching tang of diesel and coal; and the constant scratchy, smoky undertone of spent rocket fuel wafting in from the space ports surrounding the city.

The city is divided into three hundred departments that still maintain the central temples and marketplaces of the original towns and villages that existed millennia ago, before all merged in the great clatter and clanjamfry of Glaik City. Residents identify strongly with their home department, and simmering tensions between departments occasionally explode into short sharp bursts of localised warfare. Spanning the departments are the guilds, which control who can carry out what skill for what price, where and when. The sporting associations also cross departmental lines and provide a necessary outlet for the seething energy of the lower classes. The sports clubs organise events, tournaments and parades as well as local militias, low-cost funerals and charitable support for the orphans and widows.

The Securitate try to keep a lid on all the tension, or through agent provocateurs direct it in a useful way, whilst trying to clamp down on the inevitable smuggling of contraband foods, peoples, weaponry, terrorists, fanatics and heretics. The Augurs keep an eye on the temples, holy processions and street corner saints and ranters to make sure that none of their rituals and utterances are tainted with the poison of the Visible Earth heresy.

Overseeing all this are the palace administrators, mostly from the patrician families; above them for nigh on two millennia have been the princes of the Sejan family. As the famous poem says, ‘The family Sejan has, like a shepherd with his flock, protected and watched over its domain, for centuries and joys beyond count’.

Of course, as a rebellious prole declared two hundred and fourteen years ago whilst standing on a scaffold with a noose around his neck, shepherds only look after their flock in order to fleece them of their wool and roast their offspring with olive oil, garlic and rosemary. Certainly, there can be no denying that there have been moments in the long history of my family when the Narn wolves on the border looked more agreeable and less bloodthirsty than the Sejan shepherd in the fold. But in the main, I think my family’s rule has been beneficial. Even the blood- and gore-soaked reign of my father had little impact on the administration and continuity of life, culture and pride of the Glaik people – the poorest of whom knows himself to be the superior of any of the glittering princes who rule other, lesser parts of En-Feshqa.

Unlike my ancestors, though, I do not live permanently in Glaik City. I visit it infrequently, preferring to make my habitual residence beyond the south western mountains in the sparsely populated Peninsula. Glaik is too big, brash and full of noise and constant jarring and jabbing activity. But the anniversary of my winning the Sejan crown could only be celebrated in my capital. The decision had been confirmed eight months before and since then the city had – incredibly – been even busier, louder and  filled with more rumours, the loudest and busiest of these being that I would make a proposal of marriage to Q’ath, my Royal Companion.

The Glaik Royal Palace is in the centre of that city, sat like a bull’s eye target in the middle of a circular park some twenty miles in circumference. Which means no matter where I am in the palace, I am only separated from the teeming eighty-three million populace by a mere three miles or so of lawn and occasional shrubbery. This inadequate park is enclosed by a forty foot high wall with all manner of security trinkets embedded in, below and above it. This functions well enough to protect me from intruders, but it does little to reduce the volume of the twenty-four hour ruckus of the city’s economic and social activity (the Amalgamated Guild of Dockers and Stock Brokers have a nightly hound race meeting that begins at 3 am, for fuck’s sake).

Stay tuned for more of the adventures of ‘Marcus Marcus and the Hurting Heart’.

Rab is performing tales of terror at his Celtic Tales session in the Crane Bar on  26th October. Price: 10 Euro / 8 Euro. For details see http://rabfultonstories.weebly.com/