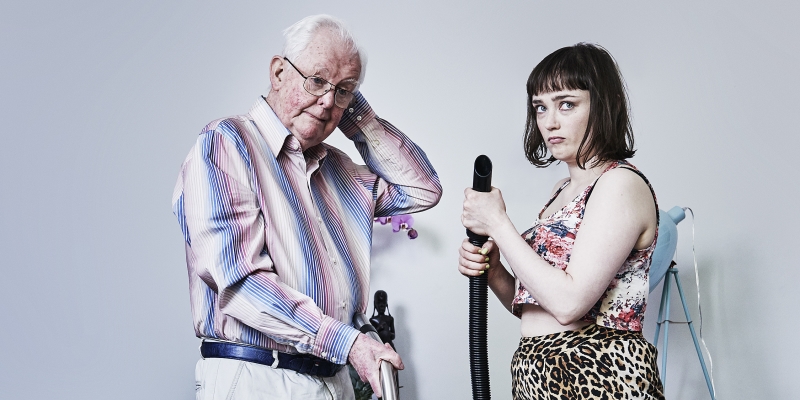 Dick Walsh is a Dublin-based Kerry-born theatre maker who previously worked as an architect and studied film in Galway, where he began making theatre. Clearly he is not a man who can be easily put into a box and his early theatre making in Galway very much broke the mould of what was happening in the city at that time, 2008 – 2011.

Dick Walsh teamed up with graduates of NUIG’s MA in Drama & Theatre Studies, Martin Sharry and Zita Monahan (also both Waterdonkey theatre company) to create Side-Show Productions. Both Waterdonkey and Side-Show proposed an alternative to  narrative-driven theatre, presenting disjointed, offbeat productions often described as post-dramatic or experimental. Though sometimes divisive, their productions provided Galway’s theatre scene with a new perspective and began developing an audience for a different kind of theatre, further engendered by the enterprising programming of Mike Diskin when companies such as Pan Pan and Performance Corporation played the Town Hall Theatre in 2010.

In 2011, JOLT, a theatre development initiative led by Róisín Stack (Galway Theatre Festival Director 2009 – 2012) and Craig Flaherty (Druid), was launched  in response to Galway’s appetite for experimental theatre. Its original intention was to develop audiences and opportunities for bold, contemporary theatre. Dodo, Waterdonkey and author Sarah Griffin all featured in the first season of work at the Town Hall Studio. THEATREclub later gave a workshop in devising non-narrative theatre, which culminated in four short performances from participants.

But outside of bigger companies, festivals and seasons of curated work such as JOLT, the struggle to sell seats for unknown, experimental theatre companies in Galway became apparent. Side-Show’s production of Love Story at GTF 2011 had disappointing houses. Funding – both local and national – was becoming more competitive in the pallid light of the recession. Naturally, artists began to look further afield for professional development and with the passing of Mike Diskin in 2012, the burgeoning theatre scene that kept the doors of the Studio theatre open, began to wane.

Artists moved on, and by the end of 2012, Side Show had formally disbanded and Lithium and Waterdonkey had ceased producing work with any regularity in Galway.  Walsh and Sharry were among those who left the city, setting up a base in Dublin and availing of development initiatives such as The Next Stage (Dublin Theatre Festival), and MAKE. In 2013, Walsh won a place on Pan Pan’s International Mentorship & Bursary Programme (Sharry won a place the following year).

Walsh and Pan Pan have continued working together since, with Walsh coming on board as ‘Associated Artist’ with the company. Pan Pan presented two of his previously staged pieces back-to-back (Some Baffling Monster and A Dangerman) in 2014 and, in the same year, produced The Seagull and Other Birds in which Walsh performed and collaborated. For Dublin Theatre Festival 2015, Pan Pan has taken on a new work by Walsh, Newcastlewest.

The play is based on an episode from Tolstoy’s War and Peace, according to the programme note. Walsh discusses finding the magical in the banal and asserts that Newcastlewest  is ‘a play with the drag left in’, something he has done brilliantly in his other work, often with deadpan, neutral delivery that is both entertaining and unsettling. In Newcastlewest, Pan Pan’s Gavin Quinn directs and Walsh is joined in the cast by Una McKevitt, Des Nealon and Annabell Rickerby. The story centres around Marya (Rickerby), a young apathetic girl with a disability living with her father in modern day Newcastlewest, Limerick, wondering what to do with her life, torn between looking after her father and getting a job. I say torn, but Marya shows no such anguish, her delivery a flat, lethargic ‘like, you know’, with an occasional smirk. This is the kind of delivery we come to expect in Walsh’s work, but Nealon plays the role of Marya’s father completely naturalistically which is at odds with Rickerby’s performance. McKevitt seems to hit the nail on the head somewhere in between, not acting emotionally but giving the audience enough intonation to get a sense of character and to maintain interest. There are two women dressed in red jumpsuits who manipulate the characters (mainly focusing on the women) but who never speak. Late into the production, Walsh arrives on stage as a suave character tentatively offering Marya a job in Brussels. Walsh brings a much needed new dynamic to the play and the plot accelerates upon his arrival. Aedín Cosgrove’s simple set of a large red wall and a blue floor reminiscent of a wrestling mat, recedes as the play progresses and freedom becomes a possibility for Marya.

With the play featuring a crippled daughter, an overbearing parent, a gentleman caller and laments for lost opportunities, Newcastlewest calls to mind A Glass Menagerie, a play I love despite it being forced down my neck at school. On the contrary, Newcastlewest is a little harder to swallow. It has many elements that you might come to expect from a contemporary theatre piece: loud dance music interludes; people taking their clothes off; long silences; an eschewing of unessential movement. But many of these elements are unjustified and poorly executed. Why the balloons during the sex scene, for example? Why the skipping rope? Why the ancillary characters in the jumpsuits? There are many themes that are hinted at – manipulation, incest, recession – but they are left to hang in the air like half-muttered questions, giving the overall impression that Walsh’s writing has not been fully explored.

There are sharp, witty moments in the play (the dance for WiFi; the iPhone guitar) and the last line is a real zinger, ending on a high note. The writing is humorous and unpretentious with some subtle pearls of wisdom, such as the words of Marya’s father ‘if you make a decision, things fall into place, but you have to make the decision.’ Walsh is clearly a man unphased by making decisions but the ones in this production are hard to identify. In previous work both he and Pan Pan have proven themselves interrogators, dismantlers of text, risk takers in form, but in Newcastlewest this is not apparent and the production lacks the sophistication and ingenuity one would expect from such a collaboration.

Article by the Diskin Reviewer