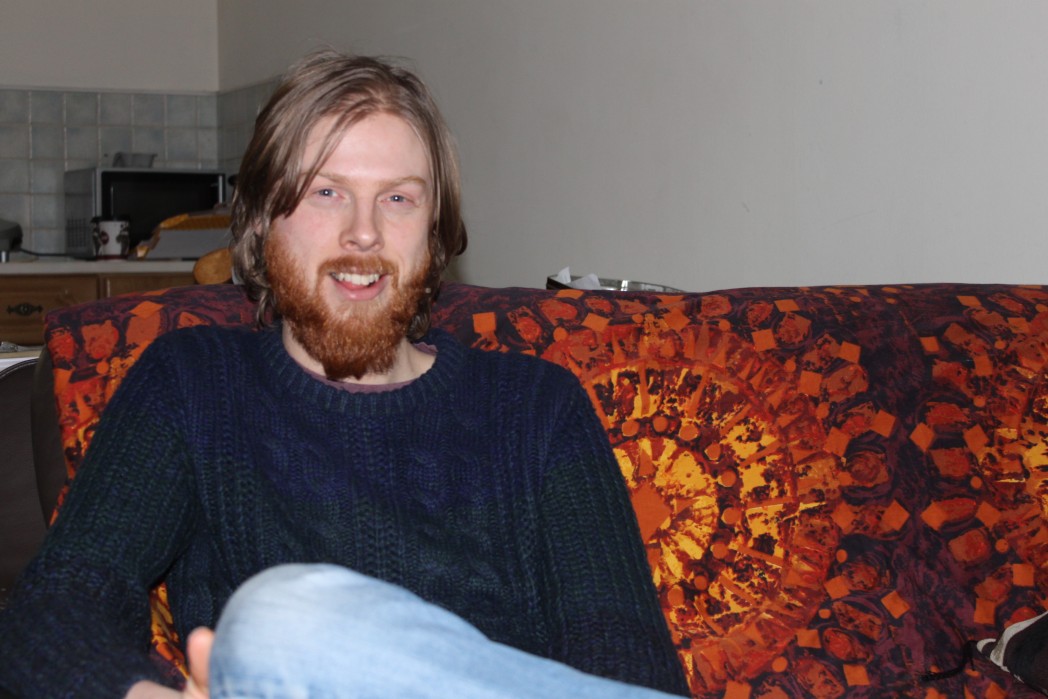 For me second segment of NXNW I’ve sat down with Aul boy, I also interviewed him. Aul boy is a cool indie kinda lo fi dude with a right good skillset ranging from music therapist to music musicist.

His EP “Blue Ghosts” came out on December 6th 2016 and it’s chock full of lovely things that you’d expect to find on a cutting edge New York indie film soundtrack only he happens to hail from Donegal instead of all that other stuff.

Yes boy!
Love the name but what the hell is that name about sir?

Ha! Thanks. Well I had always gone under the name Oddy Knocky up until this, not that I’d put anything out or anything, it was just a name that kinda stuck from when we were doing music in our teens. When it came to this project and actually looking at putting something out there, it turned out that there was already some guy in the states with that name, so I decided to just make a change.

When thinking about what the hell to call myself – and I did want to have a name to hide behind – I really wanted something colloquial. I love some of the words that my grand parents would use but “thran” and “thole” were both taken, so I threw it open to a few friends. As soon as someone said Aul Boy it really felt right. I’ve always been accused of being a grumpy old man, so there’s a bit of that in it. It also doesn’t taken itself too seriously. Do I have to say that it’s a colloquial term for “father”?

For the audiophiles out there,you said you recorded your EP on bog standard gear,can you tell me about the gear and the process?

Well hopefully the audiophiles wont be put off by the rough-and-ready sound on the EP! I wouldn’t like to say it’s completely bog standard gear as such, but I suppose everyone these days is using their MacBook Pro’s so I suppose it’s more basic than that. I used a Festex VF-16, that I borrowed off my Dad. It’s a 16-channel portastudio with an internal HDD. Before, any time I went to record something I would always run into the limitations of my laptop and then into the issue of the possibilities of the laptop and Ableton or whatever. It just always seemed to hinder the process, because there are just too many options. I didn’t want to spend two hours figuring out which of the million reverbs to put on the kick, ya know? With this I wanted as much as possible to write and record everything quickly and allow dodgy bits to just be there. Using the portastudio and keeping with the philosophy that “if it wasn’t a terrible take don’t do another one”, I think I was able to work faster and got into a space where little hiccups didn’t bother me. I really enjoyed the feeling in the room with no screens on. Everything was just more focused.

I recorded the drums with just a guitar amp mic for the kick and a vocal mic positioned well enough to get a decent mix of everything else. Two tracks on the EP came directly out of just laying down a drum track and saying “right, come up with something to go over that”. I’m not sure if you can hear it but there’s actually two drum kits on a couple of the tracks too. I’m a pretty limited drummer, to say the least, so tried to get a bit of groove by doing two just slightly different beats and panning them.

When everything was done I just mixed down a rough kinda backing track onto Ableton using just the monitor outs of the Fostex into two channels of my crappy Lexicon interface, then did the same with the vocals. After that I just EQ’d, compressed and added some reverb to the vocals and that was it really. Just exported it out.

What is your EP about,does it have anything to do with those blue ghosts that killed a few folks in Belfast last year?

Ha! No it’s not about that. It’s not really about anything specific really. This project was about getting work out there. I didn’t allow myself to use any guitar bits or lyrics that I’d been working on before. So it was just whatever was in the air whenever I sat down to work. Again, I wanted everything to be done quickly to avoid the possibility that I would over-write and ruin it, or that I would get self conscious and stall, or get hung up on editing. That’s how I ended up with a couple of songs that I really wouldn’t have thought I would write. Songs like “Rabbit” and “Work” definitely not written from my perspective and I enjoyed allowing myself to just write for the craic. “Let It Go” is guess is a bit more thoughtful and personal, but the “it” can really be anything you’re carrying around that you know isn’t good for you.

Yeah the title was something, again, I didn’t want to worry too much about it. The EP couldn’t be described as being up-beat and I thought Blue Ghosts was a nice image, it doesn’t have anything to do with the ghosts in Pac-Man or in nightclubs (though that’s where the term comes from).

You are involved in many musical projects,What is the most important thing about music to you?

Yeah I currently play with Little John Nee & the Caledonia Highly Strung Orchestra, Constant Supply, RAW, B-Koz, and Capatin A & the Commercial Monsters. Apologies if I’ve left anyone out. What’s the most important thing about music? God I dunno, that’s a big question. I suppose it’s feeling something. If you don’t feel something, whether it be an emotion or an atmosphere or a groove or whatever then what’s the point?

Do you have any personal tropes in your process?If so,what are they and do they involve long walks on the beach with the dog for inspiration?

Nah nothing that idyllic. I think for me it’s just building up enough boredom to motivate me to get stuck in.

What do you reckon has indirectly influenced you the most?

I would say Little John Nee. His creativity and work ethic are just amazing. Working with him I really saw, in a way, how easy it is to create. I mean obviously the quality of your creation varies and I can only dream about reaching his level, but it’s that attitude of just working through your ideas, not stressing about the final product and just seeing what you end up with. Working with him has definitely been a real inspiration for me to do my own work.

What album do you keep coming back to since you were a teenager?

Eh… I think The Sophtware Slump by Grandaddy would be a big one. I think a lot of Grandaddy made it on the EP actually. I seen them in Vicar Street in August and went on a bit of a binge in the run up to that. They’re still one of my favorite bands, and because they’re really their own thing, the songs don’t really age. I just love the atmosphere of the album. It’s unpretentious playing, beautifully produced. Sometimes when I’m hungover I’ll stick on Jed The Humanoid and nearly be in tears at a song about the death of a fuckin’ homemade robot. The new album’s great too actually.

What is your plan for furthering this project?

I wouldn’t say I have a grand plan. I’ve managed to convince two class musicians to back me up for a few gigs. I’ve got Bjorn Patzwald on drums and Peadar Coll on bass and they’re definitely furthering the project. I put out the EP with no fanfare or push because I didn’t know what the reaction would be. It was kind of just for me to get over myself. The reaction has been really encouraging though and I’m gonna try to get a video done for one of the songs. Unfortunately these days you wont get far without one.

Any gigs or LP’s in the pipleline?

Yeah, we’ll be playing at the Shindig in Voodo Vintage Letterkenny on March 31st, in McDaids Wine Bar in Ramelton on April 15th along with Tugboat Willy, and then at Distorted Perspectives festival in the RCC Letterkenny on April 29th.

As for more music, there are 5 new songs that I’ve been jamming out with the guys. Thinking at the minute I’ll get them into a studio and just record it live and put out another EP. Nothing decided yet though. Definitely more in the pipeline though.

Read other editions of NXNW HERE