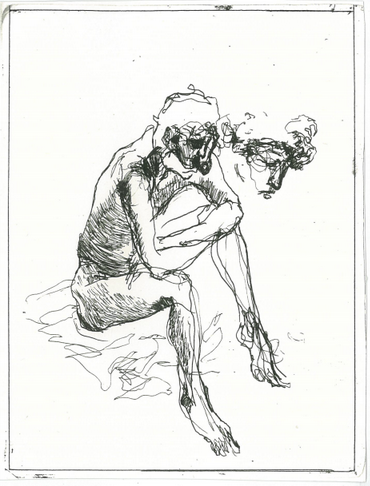 Notions through Art  is an exhibition curated to reflect the multifaceted cultural interests of  An Ait Eile. As part of the wider series of events taking place in September, along with artist Susan Roche, I intend to bring together the work of artists who are either based in or originally from Galway, and whose creativity and work reflect the transverse between the An Ait Eile subsections of  art, ecology, music, theatre, literature, film, fashion and culture. In the first of a number of discussions with the participating artists I talk to Senan O’Connor about showing his art on the streets of Galway and the unique and fluid style that made his small postcard size drawings one of the highlights of the Galway Arts Festival this year.

Gianna Tasha: Hi Senan! It was with great delight I stumbled across your art work while visiting the Galway Arts festival. My immediate impression of your work is that it is very genuine, and I was super impressed with the fact you had set up your own art stall.  It seemed straight off to me that you are  an artist who operates at grass-roots level, with a very unique style which seemed to counter the spectacle type of art in the official festival. Can you tell me a bit about your artwork, and how you came to be exhibiting and selling your work in the way you do: Senan O’Connor: So the art in some ways formed itself around the way in which I exhibit and sell. For a long time I was a very transient person. I was moving and living very bare-bones and so ballpoint pens and whatever paper was readily available become the medium as a by product of the environment. The images are mostly thoughts and scenes drug up from the subconscious so the immediacy of pen and a line that has to be kept in motion is a perfect ally for a stream of conscious method as there is no back pedalling. Only forward progression like having to keep typing as words come into your mind. I then started cutting up a sketch book in fourths so I could get four drawings per page and the out come was these little intimate postcard scenes that I could send off to friends or easily lay out and try to sell wherever I happened to be so I could get a beer or a pack of smokes. Gradually it progressed into something that could actually provide me a roof and a living and the display and art came into what it is now.

Gianna Tasha: Although you say the images are scenes from the subconscious there is a definite feeling that all the works have resonance with each other, and you have re-ocurring themes in the collection of drawings, including crowd scenes, snakes, draped bodies, birds. Your figurative works are very accomplished in their fluidity and gesture. Did you study figurative drawing, and do you recognise any influence in your works other than at a purely subconscious level? Senan O’Connor: Well I think the subconscious is directly influenced and informed by all your taking in. I was influenced largely by fairy tales, turn of the century German newspaper illustrators, circus posters. I see religion and mythology as kind of illustrations for psychological concepts that are ingrained in our subconscious so there are a lot of references to the two of those and their use of repeated symbolical icons. I was raised surrounded by Catholic art and the theatrics, grandeur and morose symbolism enthralled me as a kid. Theater and masquerade- the idea that person is kind of dressed in layers of themselves plays a big part in a lot of the images, so costumes and drag queens are an influence. And people. Everything I do is figurative. To me they are the ultimate subject. I wasn’t formally trained in drawing the figure but I look. I watch people all day. Their expressions and body language all tell some sort of story and I draw from life continually, even just fragments of people passing so that when I go to work on a drawing I have as much knowledge and concept of how the human form works as I can.

Gianna Tasha: You mention fragments and this is exactly what enthralled me with your work. I had moments before been to see the large scale spectacular work by Ana Maria Pacheco at the festival gallery, the large figurative sculptures were stunning but clunky finished people, almost finished to the point that their soul could not be located. In direct comparison your fragmented small scale drawings seemed to capture something of the movement of the spirit of the human, as opposed to the actual body, that the spirit or soul or unknown part of the human is constantly shifting. Also it made me assess the current trend for hyper real artworks capturing the human as it is seen, without disarticulating what we already see, a lot of art seeks to re-represent as opposed to actually know of? Senan O’Connor: What intrigues me most in the human form is its active inner life, that constantly shifting unknown. What animates the human form is ever changing even in its stillness and unlike the light playing over a barn in a beautiful landscape it doesn’t depend on an external influence for its life but an internal one. And that’s something ambiguous and hard to solidify. I think the hyper real rendering of the human form is working with the light on the barn, the tangible excitement that can be found in the structure and texture of it but what intrigues me in a barn is the question that its darkened windows suggests, what can’t be seen inside, what mysteries it holds.  And so in turn the expression of the eye or the slump of a shoulder hints at questions and answers and the movement of line which like thought cannot be static also suggests, by being scratched or manic or delicate or absent. I guess the ambiguity of the question is what I’m after more than a concrete answer and what is a question if not an invitation for endless possibilities of movement where as an answer is solid and still. Gianna Tasha: I think your barn analogy is one I will use again, it really makes clear what I have struggled to make clear! I am delighted you will be showing a selection works for the Notions Through Art show in September. The aim of the exhibition is to show works which have  grass-roots themes that An Ait Eile are concerned with. I think seeing your works in a gallery setting is exciting for me, because they are so fluid and also because I first experienced your  works in a busy public street setting. I think the setting could actually have an interesting effect on your work, in that a gallery can be such a static space, fixed, and lack fluidity, making works which have such qualities seep into the consciousness without so many distractions. It is such a different setting to the one you normally choose to display your work? Senan O’Connor: Yeah, gallery shows are always kind of odd for me. After so much time of street presentation I’m always excited to do a gallery show but a little uncomfortable as well. I kind of feel like I’m visiting them at a hospital or catching them in a cage. I did one show at a small speakeasy back in New Orleans where I wallpapered the wall with postcards and people just picked them off as they wanted them and left money in a jar at the bar so that the display just kind of disintegrated. I had two large originals centering the show and I tore the face out of one and sold it to someone who just wanted the face, leaving the piece a large figure in a chair with a hole for a head. The whole thing was kind of silly but probably the most comfortable opening I had because of its living quality, similar to the chaos of street selling. But comfort is not always constructive and I feel that putting any thing in a foreign element ( like for my art a gallery, or my person a new city) tests its vitality and allows for new angles of interaction. I’m always excited to see how the life of them will change, in a frame, in a group or solitary, gallery wall or bathroom stall and I hope that the lack of distraction will really allow people to catch the subtleties so easily missed by selling small black and white drawings in a busy street and allow myself another and new entrance point into them.

Senans work will be on show and on sale at the Notions Through Art exhibition this coming September. For updates please go to the Facebook page.