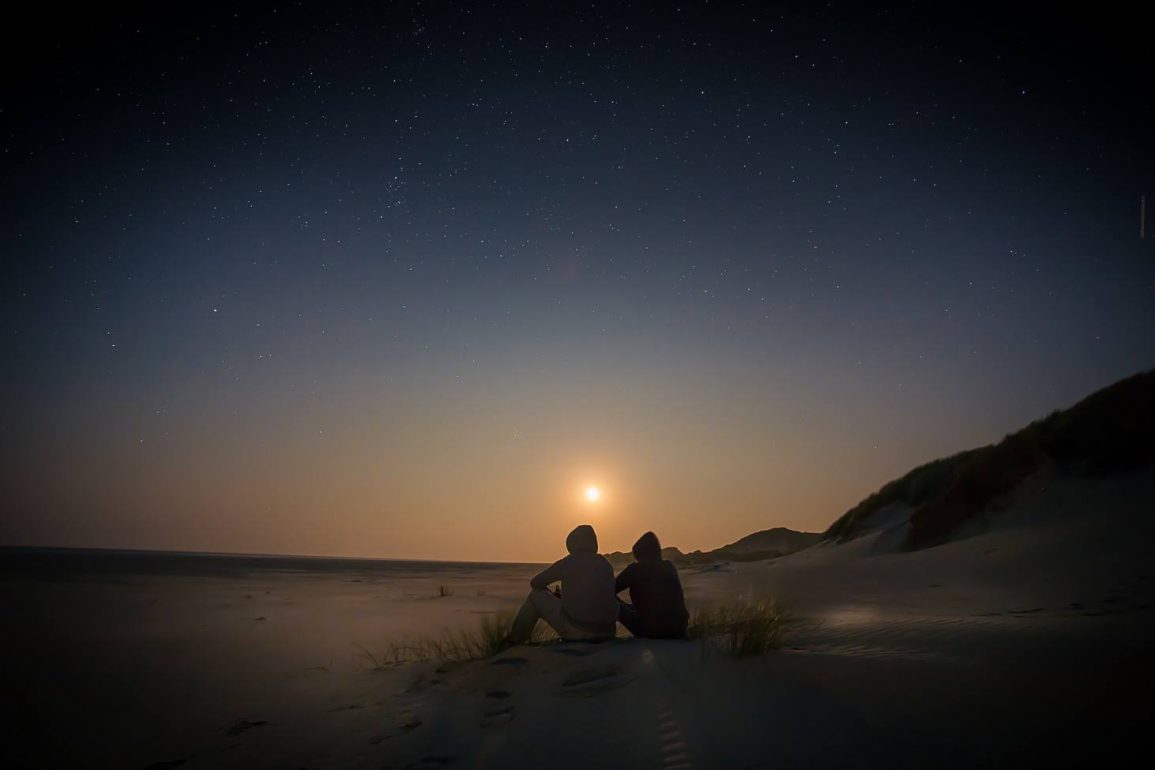 This is an excerpt from Lights, Rachael O’Connor’s work-in-progress novel for young adults.

After succumbing to peer pressure and making bad decisions, sixteen-year-old Olivia is taken from her home city to live in the tiny beach village of Little Hope for the summer. There she meets Cyprien, an off-centred boy who seems to be discovering the world for the first time.

An unusual, unrelenting heatwave has taken control of the country. Olivia’s friend from home, Lana, visits her, but since leaving the city, Olivia has learned to stand up for herself. A small argument escalates into something huge, and the visit ends on bad terms.

The heat from the day had finally subsided, and Cyprien and I sat side-by-side on the grass at the top of the cliff, overlooking the ocean. Our feet dangled over the edge, and Cyprien was swinging his legs and kicking his heels rhythmically against the earth.

With each kick, loose dirt fell like sand towards the still water below. His hyperactive energy had disappeared with the sun, as it usually did, and he was solemnly picking blades of grass and tossing them into the breeze.

The full moon hung above us, looking impossibly huge, and brighter than I had ever seen it. It was late, and Little Hope was sleeping. We had been sitting there for a while, watching the lights in the little town switch off one by one, until the only artificial lights were the streetlamps that dotted the main street and the top of the beach strip.

Everything was silent, save for the low hush of the water moving below us. Even the gulls were quiet tonight. The moon gave the world a strange silver glow, like there was magic ingrained in it.

The stillness of the night calmed me, and the mixed, irritated feelings I’d had since Alana’s visit began to quell.

“She just knows how to get to me,” I was telling Cyprien. “She’s always been able to twist me round her little finger. I don’t know how she’s got this hold on me. I’m only here because of her—it was her idea to take Mam’s car for a spin. Her idea to try doing donuts.”

“And her idea to pretend the two of you didn’t know what happened to it?”

“Precisely. And you see how that went. Carted off here for the summer.”

“It has its ups and downs,” I relented with a smile.

We were quiet for a moment, breathing in the sea air.

“I wasn’t always like this, you know?” I said suddenly. “When I was younger I was almost as weird as you.”

“I was totally in my own head,” I continued, ignoring him. “I lived in a dream world and played imagination games and wrote weird stories and acted them out.”

“I thought lots of children do that?”

“Try fourteen years old,” I sighed. “But I didn’t care what anyone thought of me. I was happy, and then I met Lana and she showed me how… how wrong it was, that I wasn’t growing up. That I liked cartoons and believed in fairies. She made me ashamed of it. And I thought the answer was pushing everyone away and acting cool, acting like her. But it’s not who I am.”

I glanced at him and found that he was studying me, a slight frown on his face.

“I think you’re getting back to who you were.”

I smiled but raised my eyebrows, some small, petty part of me not wanting to let him know how much I needed to hear that.

“You’re the first person I’ve met that I can talk to like this,” I said.

I gave an exasperated laugh. “You always do that. Why do you say things like that?”

He looked at me again, that same strange gaze like he was studying me, or lost in deep thought with himself. Then he looked away, up towards the moon. And when his eyes met mine again, the smile was back.

He stood suddenly in one swift motion, his energy returning in such a burst that I thought he was going to topple straight over the cliff edge and into the water. But he got his balance and stood above me, extending his hand. I took it and let him pull me up, and we walked the long, winding path down a grassy slope until we reached the edge of the strip.

A single streetlamp flickered against the darkness. Concrete steps led down to the beach, the pavement old and swept with sand. Weeds sprung up between the cracks, and we each took off our shoes and socks before we reached the shore, leaving them by the orange light of the lamp. And we walked toward the sea.

“Look,” Cyprien said, taking my hand again and pointing toward the sky with his free arm. “Do you see that? That star there, the bright one next to the moon.”

“That’s Jupiter!” He smiled. “Biggest planet in your solar system. And there—” he squinted. “—there! That little red one. Mars.”

We walked on. The sand began to stick to my feet as we got closer to the water.

“That one’s my favourite,” I said, pointing upward. “You see the one that looks like it’s flashing different colours? The Dog Star? I used to make wishes on it but they only came true, like, 20% of the time.”

“There’s the big dipper,” he continued, off in his own world. “And the little dipper, there.”

Pinpricks of light broke through the dark night sky, dotting the universe with their glow.

“We’re like the stars,” he said, and he stopped walking.

“I’m showing you,” he said, and a faint smile appeared on his face. “Look around you.”

My gaze dropped from the sky. And I saw the ocean.

We were in the middle of it. All around us stretched water in every direction, like an infinite dark mirror. We were deep enough that it would have been up to our calves. We had walked right into the sea, but the liquid ebbed around us, never touching our feet.

An invisible barrier protected us, forcing the water back and around. We were dry, save for the mucky sand that stuck to the bottoms of our feet. I turned to face the way we came and saw the same black reflection and, in the distance, the light of the street lamp on the beach. We were an island in the middle of the sea.

Either my mind was spinning too fast for me to comprehend, or it had stopped completely.

He was silent, his eyes half-closed in concentration. Ahead of us a geyser erupted in deep water. I heard the roar in the distance, and before my eyes the geyser became a whirlpool, a levitating tornado. Then it collapsed, and another one began, even closer to us.

Suddenly walls of water rushed up towards us. And we were submerged—or rather, the ocean enveloped us, hanging over us, but never touching us. It rose above us and closed over our heads, blocking the light of the moon, surrounding us in a solid green glow, a liquid snow-globe.

And then, as I first noticed the silver fish flitting around in front of us, the snow-globe became an aquarium. The top opened up to let the moonlight in, and spirals of water flew into the air before falling back down.

A large grey fish swam into vision in front of me and we regarded one another in its domain. Strings of seaweed floated past, caught up in the invisible current. I put my hand up to the wall and it receded before my touch.

It was impossible. Completely impossible. As impossible as fairies and dragons and all the things I used to believe in. And it was happening right in front of me.

After a time, the water receded gently, sloping back into itself without breaking a wave. Everything became still again, and all the while I thought I heard the whisper of music notes in the air.

We were back on the beach strip, standing under the flickering streetlamp where we had left our shoes. We had walked back slowly through the sea, and the water had pushed back from us again. This time I had watched it, entranced at the way it melted away from us.

“Did I do a good job at passing for human?” he grinned.

We were quiet again, illuminated by the harsh orange light. The lamp itself was slightly crooked, casting our shadows on the wall behind us. I stole a glance and saw Cyprien was gazing up at the moon again, like he so often did. A bizarre thought struck me.

“So… are you actually from the moon?”

He looked down and caught my eye, a brilliant smile on his face.

“Do you have the same one?”

“Not that moon, no. But something similar.”

“What about the sun?”

“I can’t stare poignantly at the sun and daydream,” he laughed. “I’ve tried, it hurts my eyes. And besides…” That sombre look returned to his face and he diverted his gaze, speaking in a lower tone. “The moon seems… lonelier. The sun brings people out. The night is quiet.”

He paused for a moment, still star-gazing. “It looks so close from here. But it’s hundreds of thousands of miles away,”

He frowned but didn’t answer.

“There is no way back, Olivia. I’m not an alien. I’m not from a different planet.”

“Don’t bother being vague and mysterious. It’s way too late for that.”

He threw his hands out wide in frustration and then froze. A strange expression came over his face and he looked up at the lamp that was casting its light on him. His face softened and he turned back to me.

“Okay,” he whispered, in a tone that almost sounded resigned.

I watched him lower his arms. I watched him straighten his back and take a breath. And then I watched his long shadow on the wall behind us as it transformed. Large, dark shapes moved out from each shoulder’s outline, unfurling layer by layer. I was reminded of a fire catching.

Slowly, the shapes came into focus, stretching out; a black stain creeping steadily under orange light. The two new shadows shot up, huge and alive, and I heard the swooping noise of beating wings.

He stood before me, the boy with an angel’s silhouette.

Rachael O’Connor hails from Newcastle West, Co. Limerick and holds a Masters in Writing from NUI Galway. She has previously published articles, short stories and excerpts via Campus.ie, The Galway Review, Dodging the Rain and Sin Newspaper. She currently lives in Germany.