Oh My God, What a Complete Aisling by Emer McLysaght and Sarah Breen 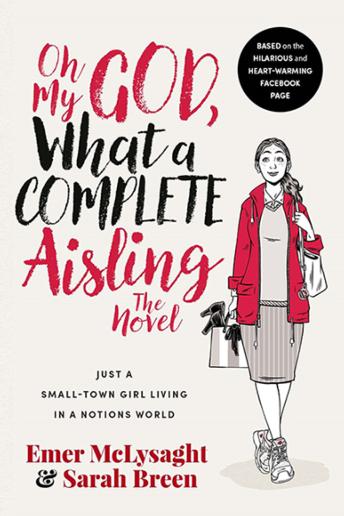 Oh My God, What a Complete Aisling (OMGWACA) begins with our heroine in one of her most natural of habitats; at the wedding of one of her friends to a GAA star. Like most of the other weddings she’s attended since her friend group hit their late twenties and started getting hitched in a frenzy, this one has ticked all the boxes to ensure the perfect start to marital bliss – church service, reception in the local hotel, fivers being stuffed into a pint glass in order to bet on the speeches, members of the GAA team hitting the dance floor with ties around their heads and tears in their eyes to the sounds of such hits as We Are the Champions and Mr. Brightside. Aisling takes a quick loo break to rest her weary feet – no flipflops provided for dancing purposes in the bathroom, a minor mark against the day – and overhears two blow-in cousins from the groom’s side chatting as they reapply their makeup. “That Aisling, she’s gas isn’t she. There’s one just like her in my office”.

A neat way to introduce Aisling to new readers without sacrificing plot, authors Emer McLysaght and Sarah Breen introduce Aisling in the most Aisling of ways, thus bringing their eponymous creation from their Facebook page onto the printed page and straight into the hearts of the nation. The idea of Aisling was conceived when the pair lived together in Stoneybatter after moving up to the big smoke from their respective  Ballygobackwards, and realized that everyone knows and has great affection for a girl just like Aisling; sensible, traditional but in a flexible way, brings tea and biscuits with her on her holidays abroad and carries her good shoes in a Brown Thomas bag, with her Michael Kors bag proudly on her other arm, as she pounds the pavement to work in her trusty trainers.

If there’s anything that Aisling isn’t, it’s a hipster, which is ironic considering all the cries of “I knew about OMGWACA waaaaaaaaay before the book came out” from members of the Facebook group of which she is the subject. Although chance has it you too already know Aisling. Everyone knows an Aisling, which is why the group is so beloved, why Aisling is cherished and why newcomers to the page, of which I’m a member, and have been since waaaaaaaaay before the book came out, (#notions) are being gently reminded by the old hands about the rules and regulations to stick to and to treat with respect the other characters in Aisling’s life that are so familiar that they may well have been written surreptitiously by your next door neighbour about you, your family and your coterie of friends.

In this chapter of Aisling’s life that we are privy to, great upheavals are occurring. After the wedding Aisling begins to wonder why her boyfriend John hasn’t gotten round to proposing to her yet, sure haven’t they been together for years and years now, and isn’t it time to take the next step? It turns out he’s fine as he is for the moment, and a huge argument at the end of a holiday to Tenerife results in the end of Aisling and John. Adrift in the world of singledom she’s decided to open herself up to new possibilities and finds herself living in a swanky apartment alongside her cool colleague Sadhbh, even staying up for weekends instead of heading home to her house-proud mammy and lovely daddy for their usual Sunday dinners with all the trimmings.

Aisling’s best friend Majella, a vodka and diet coke swilling, phone-losing-at-the-back-of-a-taxi, out-on-a-school-night primary school teacher becomes her anchor to her home town, and reveals that John may have taken up with a new woman, as seen together at the back of the local late-night bar. This spurs Ais on to broaden her horizons even further, and we root for her, laugh with her, cry with her as she navigates the trials and tribulations of being a 28 year old Ais in the big city. Aisling is a very particularly Irish version of Bridget Jones, and considering the outpouring of love for the book so far is destined to become as ingrained in the public consciousness as her British counterpart is. You really will laugh out loud, you really will cry, you really will want to share Ais with all your friends, especially your own group’s Aisling. Because come on, we all have one, and you know who she is.