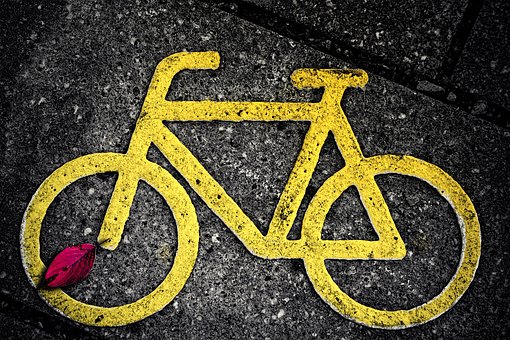 There is an ongoing campaign to make it a legal requirement to stay 1.5M from a cyclist while passing, Minimum distance passing legislation or MDPL –  while I agree with this, it does inspire my inner nihilist to examine the culture and perceptions of shared space among cyclists, drivers and pedestrians in western Ireland.  Angry drivers gonna hate this. I spend a good 32 hours of my 40 hour week reading arguments about cycling and driving on twitter. It’s a goddamn war zone out there. I swear if we had to play out these discussions on any person to person physical platform there’d need to be a referee and several discreet but forceful security staff. The kind who just make people evaporate from the building while their digital footprint is quietly erased from the CyberSphere.

It’s all gotten a little tangled up, like a rubix cube made of rainbow coloured spaghetti and, being human and flawed, I’ve once or twice tangled myself up in this mess. It’s a continual barrage of  ‘Why do drivers keep cycling so close to cyclists’ versus ‘why don’t cyclists pay road tax and get a licence for being annoying and sexy and bikey’ versus ‘why are you driving on the kerb’ versus ‘why don’t you wear a high viz jacket and a helmet’ versus ‘I need to do my deliveries and there is no parking’ versus ‘your stupid bike is blocking the path of my wheelchair, you idiot’. How civilised and mature we have all become with the advent of global communications!! Sometimes it’s a little cathartic to weigh in with Iron Man style lazer fist things with my superior, unquestionable knowledge I’ve garnered from a lifetime of well, moving about the place on roads, but as always, my article needs an intro and I’ve hit the 250 word mark, so let’s start the unqualified and hastily researched analysis of the scenario*.

*If I say situation, people make jokes about my northern accent, so let’s go with scenario.

So first off, let’s deal with the big one. Who owns the roads? Does road tax give you deed and title to the road, or, as a human existing in Ireland, have you got some kinda equal ownership futuristic star trek communal possessions for the greater good of existence type thing going on? I just looked up what Mccarthyism is on the internet and it doesn’t quite fit the example sadly, but anyways, are roads capitalist or communist? I’m the actual worst. I have a bike, I have a car, I pay road tax and I own lycra. There is so much to hate right there.

Quick bit of math, or ‘sums’ for those who don’t do math. Presuming I’ve bought the biggest most expensivest car in Ireland and pay 2350 euros of road tax every year of my driving life till I die at the age of 100, I’ll have paid 195050 euros of road tax. According to searching the internet, motorways cost a minimum of 6 million euros per kilometer, so my entire lifetime of paying road tax would entitle me to around 33 metres of motorway. So, counting only the motorways in Ireland, which is about 1000km, and ignoring every other road, street, footpath, cycle path, greenway and boreen, I am likely to own 0.0003 of the motorways in Ireland – so while it’s zero craic paying road tax only for some sweat covered lycra creature on a bike to mildly inhibit your trip to the petrol station or motor tax office, considered as a function of capitalism and looking at an extreme case, it’s really hard to claim a personal controlling share in road ownership.

I pay much less road tax than that, as does anyone who isn’t a lizard dressed as a human dressed as an oligarch, so personal road ownership is probably not a provable thing in Ireland – if we did the actual math/sums on how many roads there are, you’d be lucky to pay for the length of your car in your lifetime in terms of road ownership. At best we can really just claim to have some kind of star trek communal ownership type deal here. I feel like people will prefer that analogy to me outwardly hinting at communism more than once.

I use motorways as our example here for a very important, if slightly manipulative reason. It makes my article sound more convincing if I set it up this way. When you have passed the L and N phase of your driving career, you get to play on the motorway with the big boys and the big girls. These girls are not big, it’s just a turn of phrase. The girls very likely are actually women and men in cars rather than girls. The men aren’t girls, except some of them who are on a different part of the confusing but wonderful spectrum of human sexuality, regardless, to remain safe, we must respect them and the road space we all occupy together. Oh what have I started. Anyways. A motorway is not a shared public space, it’s a space for vehicles that can reliably travel at 50kmh and survive a horrific crash. But if we are to obey the rules of the road, we have to assume the opposite is true for every other road in the country – that they are a shared space for all users and these users might not have airbags and safety computers and Jeremy Clarkson voice overs. It would be very helpful and informative if they had signposts with a similar list of information for all the other, not so cool, non-motorways.

I have made an example one of these to explain this idea with a picture. Also that was way too much text in one go, we all need a picture break here. Text is boring. The earliest reference I can find for road tax in Ireland is 1924. Before that, roads did not exist. It’s a marvel and credit to generations of engineers that all these roads built in the last 95 odd years, all connect towns and houses, and it must have been a logistical nightmare in the 1800’s to get anything done before there were roads. It’s a bit like the pyramids really, so many questions!! Like how did they bring the roads to the roads if there weren’t any roads? ALIENS. In fact, I’d go so far as to say, had there been roads at the time, the famine could have been avoided.

I’m no archeologist, or archaeologist even but I’m going to put out the theory that roads have existed much longer than cars, and unless someone finds a bog body listening to will.i.am in a blue citroen saxo while texting their friends and ignoring a traffic light, then I am going to say it. Roads pre-date cars. To extrapolate further on that point, collective organisation also predates cars and public ways – highways and so forth have been a thing that people have used for quite some time, and for angry car owners to storm into the conversation 5000 years after the creation of earth and assume some sort of personal ownership of the roads, is frankly a little arrogant. If there were dinosaurs watching, I personally would be mortified on behalf of humanity right now.

So, your honor, I do profess, we as drivers, don’t own the roads. But we very much have to share them with a plethora of slow annoying things that were not in the advertisement when we bought the car and that’s where I try and swerve this article into the lane of shared space, ecology and so forth. Outside my career of being a person who drives to work, I’ve been cycling in one or two civilised countries over the years, Spain being an example. This is the second article I’ve mentioned that in. Unbearable. Anyways. In southern Spain the idea and comprehension of shared road space is very well developed, both philosophically and in the development of towns. Here’s what shared space looks like when Spanish town planning gets its mitts on it: My photo isn’t great, but the markings on this bike road tell you where it goes, and they tell you also that it’s a space to share with wheelchair users. Simples. I know I can cycle on it without annoying the citroen drivers in the background and I know I have to cycle slow enough not to ruin some wheelchair users morning. I don’t annoy the drivers or the people walking. This, person who is being forced to proofread this, is shared space developed properly. This is the dream people. What do we get in Galway? Angry people posting on twitter about getting run over or having some bike idiot clamp their bike in the way of their wheelchair, or park their delivery van in the way of my bike, or angry car owners posting about how I got in the way of their stupid car. If I could choose what 33 metres of road I’m going to pay for in my lifetime, it would look like this. The colour scheme even suits Galway for the love of dinosaur christ.

While we scratch around in the bog dirt and limestone deserts of Galway for potatoes and the occasional delicious root of sorrell on which to gnaw on with our crooked feral teeth, eeking out a living, and trying to comprehend the civilised world, wistfully remembering the day we got an apple and waiting for city development to catch up with our far flung fantasies of having segregated cycleways, footways and motorways. Oh wait, awkward, we have motorways. Anywhoooo, while we wait for this to happen, all we can do is make the best of the roads that exist. We can’t do it immediately through development, so sadly, we are going to have to attempt to be considerate and thoughtful. How 90’s and twee.

As drivers we are faced with two options. We can veer as physically and as aggressively close to the cyclist as legally possible, wind down our window and scream until the gas in our lungs has been so well eradicated that the seat of the car is now vacuam attached to our spinal column and our eyes have committed to a dry and motionless gaze, darkened and half their size as their mass attempts to fill the chest cavity where our lungs previously were, through the medium of sinuses, a stream of curse so explicit that a few passing championship GAA defenders who overheard it start crying and asked for kittens, or, we can give cyclists a little space and a little patience and realise that freedom to move in our common existence on earth is a little more than fifteen grands worth of steel, oil and plastic coupled with 33 metres of personal road space on an island west of everything. Otherwise people will get hurt until it becomes law.

Likewise when you lock your bike, being close to the avocado, latte and emotions cafe where the communist activist group democratic environmentalist shared space discussion forum is happening – should not take precedence over making sure the footpath is clear for wheelchairs and buggies and things that might possibly not be you yet still want to use aforementioned footpath. Lacking any form of decent facilities, developing some sort of patience might be the only option. Shared space isn’t concrete or tarmac or signposts people, it’s in your hearts and it’s in your minds, dear sweet readers.