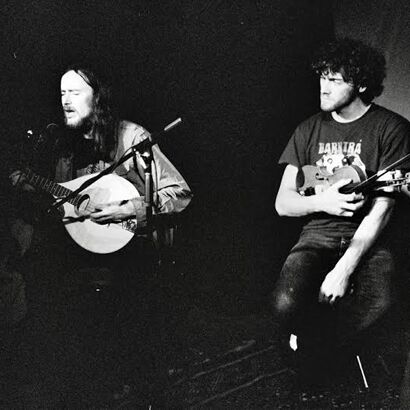 The Driftwood Manor mix Irish traditional music and folk with a range of other influences, from Eastern music to alternative rock and electronica. The band have released three albums and six eps since 2008 on a number of independent labels and were voted in The Irish Times’ Breakthrough Acts of the Year for 2011 following the release of their second album ‘The same figure (leaving)’, on Rusted Rail and Slow Loris. Three English tours in 2014 saw the band play to audiences in cities such as London, Bristol and Brighton. The Driftwood Manor also performed twice at 2014’s Electric Picnic and were among the headline acts at The Bath Folk Festival in August in the UK. The band’s last album, 2014’s Of the Storm, released on English label Stone Tape Recordings, received airplay on BBC Radio 3 among many others and was voted in the Folk Radio UK Albums of the Year for 2014. In 2015, the band performed at Electric Picnic again (at Cathy Davey’s My Lovely Ranch and The Bog Cottage at Body and Soul) and toured extensively. During this time they also recorded their latest album, For the Moon.

An Áit Eile has the exclusive premiere of their video for new single Fire And Brimstone. It was made by Max Webb and tinyEPICS and was computer animated by Max over the past few months.

The story follows a young boy who is befriended by a Wolf after his mother is killed by a gang in the Old West. Together they exact a bloody revenge on the gang some of whom are based on The Driftwood Manor band members. The track is taken from the album For the Moon, which will be released on UK label Folkwit Records on July 8th.