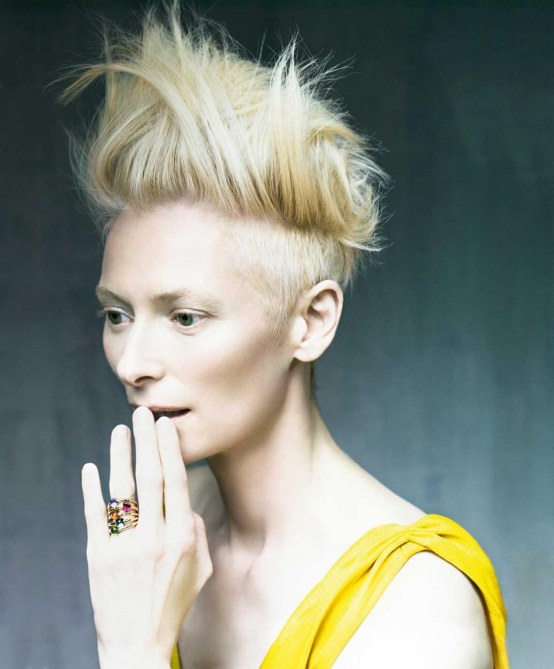 Watching the Jim Jarmusch film Only Lovers Left Alive during the weekend re-ignited my girl-crush on the ethereal beauty that is Tilda Swinton. With a good 20 years on co-star and on-screen husband Tom Hiddleston she exuded a certain something that not many Hollywood stars can even hope to; the  Academy Award winner has been heralded as one of the most influential, chameleonic and versatile actresses of her generation, yet she is by no means your typical Hollywood leading lady. From Marilyn Monroe and Rita Hayworth to Grace Kelly and Audrey Hepburn, old school stars are assigned to the loftiest of pedestals and continue to be emulated as much as their impossibly beautiful contemporary counterparts like Scarlett Johannsen, Angelina Jolie, Halle Berry, Natalie Portman. Those endowed with unconventional looks are more often than not assigned the condescending character-actress moniker.

But even so, like Bette Davis before her, Tilda possess a quality that a great deal of actresses aspire to, a je ne sais quoi that, by its very nature, is difficult to put one’s finger on. Aside from her enormous talent and self-possession, her out-of-this-world appearance has many searching for the answer to why such an unusual looking entity, by no way falling into the ‘classically beautiful’ category, can hold such a command over the world of stage and screen. The world of fashion, however, is a different story.

The Industry has an unconventional approach to beauty. Every Cindy Crawford and Miranda Kerr is complimented by an Erin O’Connor or Stella Tennant. Even Kate Moss was considered an odd choice when she first started out as was caterpillar-browed Cara Delevigne. Basically, despite its pathological aversion to weight and age, Fashion loves someone a little weird.

Unfortunately for the rest of us actual uggos The Jolie Laide Crew (for that is what this contingent falls into) is as exclusive as that which contains the sickeningly beautiful. Not everyone with a jaw you could cut glass with or a Roman nose can declare themselves “Pretty-Ugly”, it must be accompanied by an unwaivering self-confidence. Take the magnificent Angelica Huston (who we lucky Galwegians can claim as our own considering her lofty heritage). No one can deny that in her hay-day she was gorgeous, and sexy as hell, but what about that rectangular face, prominent nose and those diminutive lips? Who cares about the individual features when the whole package is transcendent as hers.

It could be that the Jolie Laides take the opportunity to experiment with their ‘handsome’ appearances more than others, deciding to take interesting hair risks or out-there sartorial choices. Tilda is known for her personal style, as is Sarah Jessica Parker, who is on the cusp of being JL. SJP has had to put up with constant derision over her face – I think she’s amazing, as do many other women who admire her clothing choices and general style-icon status – but men just don’t seem to get it at all.

There are others with the JL gene who fit into the category; Cate Blanchet, Charlotte Gainsberg and her sister Lou Doillon, Barbara Streisand, Chloe Sevigny, Cher (pre-surgery) and more. Even the Jolie-Jolie girls have discovered the allure of beguiling imperfection, changing their style, disguising their beauty to give them a bit of an edge, break out of their pretty-girl images. Remember when Emma Watson chopped off all her hair, or when Rooney Mara took her extreme Lisbeth Salandar makeover with her when she finished shooting The Girl With the Dragon Tattoo? It works to an extent but really it’s like the opposite of gilding a lily, and just as futile. Don’t despair my pretties, you’re still cool. Just not quite as cool as those who don’t need to try.