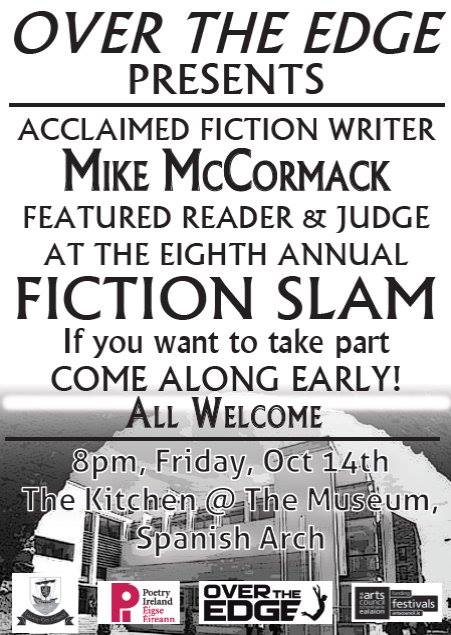 Rebecca Spicer is a recent graduate of the MA in Writing at NUI Galway. Her blogazine Dodging The Rain (dodgingtherain.wordpress.com) will be launched in December. This blogazine is a collaborative between herself and several other writers from the MA in Writing.

Also in December, Rebecca’s short story ‘Summer Street’ will  be published in The Incubator.

The following piece is an account of her recent experience as one of the judges for the Over The Edge (OTE) Fiction Slam in The Kitchen, at Galway City Museum , Friday 14th of October 2016.

My part in the judging panel for the Over The Edge (OTE) Fiction Slam was purely circumstantial. Since April I have worked for OTE, with Susan DuMars and Kevin Higgins,  which involved mostly poster runs and helping with events. These tasks may seem small but I’ve enjoyed helping with OTE.

I was excited and really looked forward to participating in the annual fiction slam. However, as time grew closer, I realised how unprepared I was to read in front of an audience. The pieces I’d selected were far too long to fit within the five minute allowance and I hadn’t practised. I decided to give another reader a chance, as the quota amounted to twelve participants. When I arrived at The Kitchen, a café in Galway City Museum, I quickly told Susan that I wouldn’t be reading. Kevin was in London and  Susan was leading the Fiction Slam on her own. She seemed relieved and asked me to be the third judge.  I didn’t feel like I had enough experience to listen and score another writer’s performance. Nevertheless, I agreed and took a seat at the front of the room next to the other two judges: Mike McCormack, author and director of the Creative Writing programme at NUI Galway; and Bernie Crawford, editor of the Skylight magazine.

Mike was to be the featured guest, reading from his successful novel Solar Bones. Although Mike is quite popular for his literary works, I knew him as my lecturer at the MA in Writing course at NUI Galway.

When the clock turned 7:30, people lined up to enter the slam. By 7:37 the twelve slots were filled. Susan handed each judge a sheet with twelve spaces, representing each of the participants for Round One; five for Round Two; and a grading rubric. We were briefed to observe the delivery, as well as the story content. The slam started off with incredible performances. I had difficulty assigning scores to each reader as the pieces were all expertly written. Suddenly, around the time of the performance from the third reader,  I had the sudden need to use the restroom. This made for an even more interesting first round, given the palpable tension in the story plots, the competition, and the strength of my bladder! I noted that a judge cannot get up and pop off to the bathroom in the middle of a round; then I held my breath, crossed my legs, and focused on the competition. Near the end of the first round, some of the more memorable stories featured talking pigeons and a paranoid wizard. As the last story came to an end, I immediately turned in my sheet to Susan and ran out to the toilets. Oddly enough, there wasn’t a queue. People chattered inside about their favourite stories or how nervous they had been, and so I kept my head down and bee-lined it to the first stall. I had waited a full hour during the reading to use the toilet – hopefully they couldn’t read the desperation on my face.

When I made it back into the café and Susan had finished tallying the scores, we were asked to put five contestants forward to the next round. This would not be announced until after Mike read. Mike gave an outstanding performance, reading a selection from Solar Bones. He delivered the excerpt at a steady pace that expressed the solemnity of each line: “I came home and and found sh’d been sick since morning, nausea and fever for the first couple of hours but worsening to cramps and puking in the afternoon, keeping her in bed with the curtains drawn, a livid flush on her cheeks and a gloss of sweat on her face, her voice a thready rasp of itself, whispering”.

After Mike’s reading, the five people who made it to the next round were revealed. We put forward six contestants because there was a tie. The same rules applied: five minutes were allotted to each reader. The scores from the first round were erased and they subsequently started afresh. We had been warned that sometimes a reader will surprise us and not perform as well in the next round, meaning that they frequently don’t anticipate going forward and haven’t prepared. Having said that, all six of the readers were excellent and delivered equally interesting stories. The last story ended and we waited for the results. George Sheils won the Fiction Slam and it was well deserved. His prize was a bottle of wine and bragging rights.

Being a judge for the OTE Fiction Slam was a memorable experience. It boosted my confidence and allowed me to enjoy each of the writers’ work in a new way. I will always be grateful for the chance to work with OTE.

Over The Edge is an excellent resource that gives equal attention to new and experienced writers. The organization offers fiction and poetry classes, monthly open readings, and a commitment to showcasing local talent through their featured readings. The next Over The Edge open reading is on today at 6:30 p.m. in  Galway City Library. Featured readers will be Lorna Siggins, Bernadette Joyce, and Jackie Walker. If you are interested in participating in the open reading, arrive early and sign up with Kevin Higgins. Your piece should be no longer than three minutes. All are welcome!