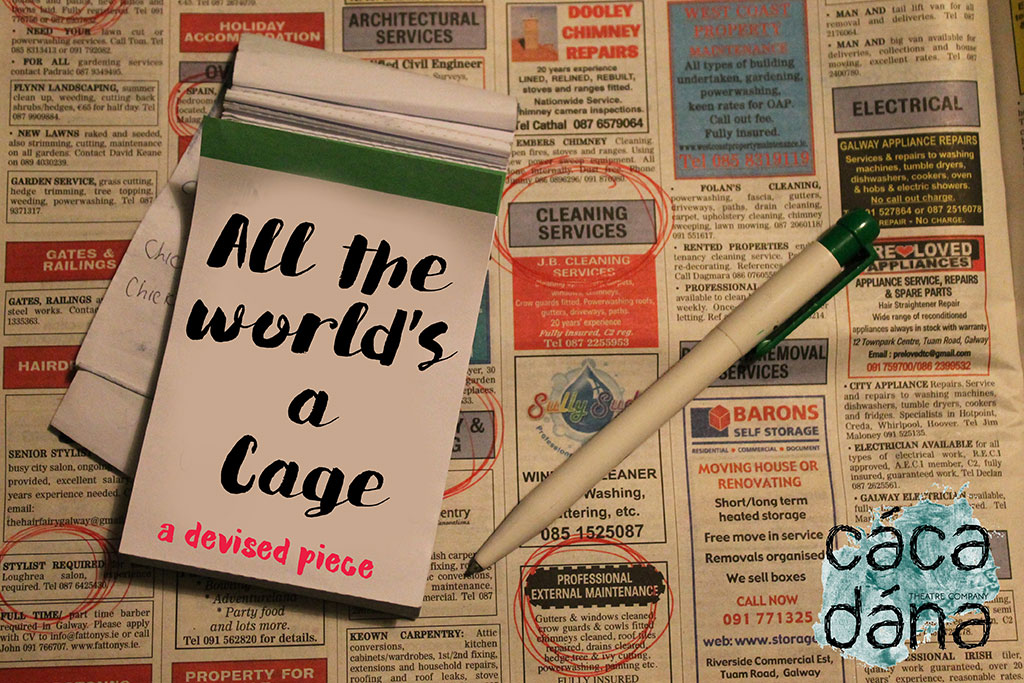 “People just don’t find women entertaining”, cries Jill (played by Niamh Ryan) halfway through Cáca Dána’s first play. The line might be revealing a note of fear in its maker; Ryan, also the head writer, has never penned a full-length play before. But she and her cohorts have nothing to fear. “All the World’s a Cage” is a rip-roaring success from beginning to end. Imaginary tinder gameshows, audition re-enactments, and a womb ceremony, this portrait of what it’s like to be a young woman in the modern age is brutally honest, hilarious, and makes no apologies.

The show follows three friends – Amy, Jill and Tina – on the evening of the TV License Inspector’s visit. It’s the 4th year in a row that they’ve had no money to pay him, and so they have locked themselves inside the front room of their dingy, mould-ridden Galway apartment to avoid speaking to him. At this juncture, the girls are forced to consider the stages they are at in their own lives; where they are going, where they would like to be, and the pressures of subscribing to the formulaic life laid out for them by “the patriarchy”. They talk about relationships, sex, the prospect of having kids, what is defined as a good job. They discuss feminism, femininity, what it means to be a woman in a man’s world. If these themes have the potential to come across as didactic, they certainly do not here. At no point during this show can the strings of opinion be seen. The dialogue is fluid, each set-piece moves naturally into the next, and each character gets sufficient airtime to demonstrate the complexity of their personalities. The writing is so honest, at times it feels as though the audience are intruding on a conversation that should only be shared between best friends.

And not only is “All the World’s a Cage” wickedly entertaining, it’s important. The show fits into a wider canon of recent films and literature exploring a phenomenon facing the current generation: the quarter-life crisis. A degree no longer means a job. The world of work, as we have known it, is changing dramatically. A huge number of highly-educated people are graduating from college each year, burdened with inexperience and a lack of direction. The result is usually a feeling of aimlessness, lack of purpose, or pure boredom. It is to these legions that Cáca Dána speak loudest. It’s normal, Ryan’s script reassures, to be 23 and have to wear a sandwich board. When coupled with the zany, brash chemistry of the trio, this content not only rings true, but it feels fresh and energetic.

The production values do what they should; the set (including a copy of J. Howard Miller’s iconic poster used by the feminist movement in the 1980s, emblazoned with the headline “We Can Do It!”) is competent, the sound cues move the story along with good pace. But the real sparkle here comes in the form of an innovative lighting motif (designed by Marie Hegarty, who also plays Tina). An orange streetlamp shines through a venation blind, Film Noir-esque in how it imprisons the characters. A middle-finger to the genre most notorious for its Madonna-Whore treatment of female characters? Very likely.

“All the World’s a Cage” hasn’t “got balls”. It’s got breasts, vaginas, used-tampons, water-pistols full of oestrogen. It’s got witty lines, resonant themes, and fabulous performances. And it aint afraid to use them.