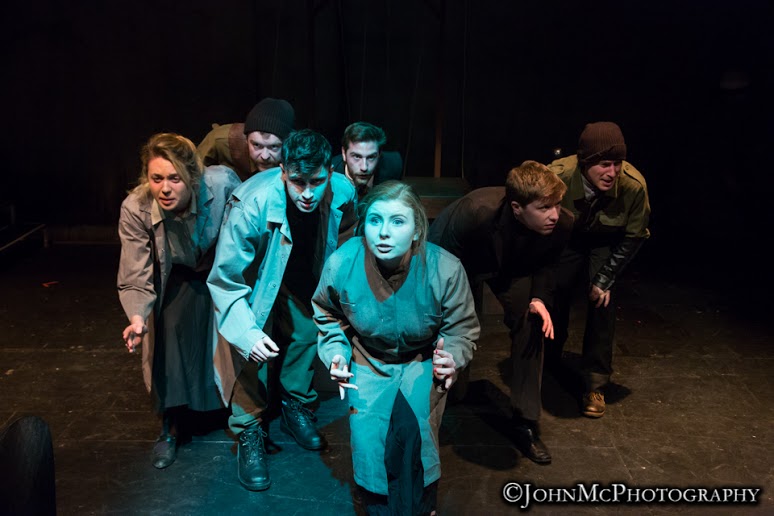 Featuring the talent of NUIG and the Core Theatre College, and directed by Max Hafler, this thrilling production of Caucasian Chalk Circle was full of energy and charisma that grasped the audience’s full attention from the opening scene.

The story centres on the trials and tribulations of Grusha (Paige Louter), a maid to the Governor’s wife, Natella (Aoife Corry), in the city of Nuhka. When the Governor is overthrown and the city set to burn, Natella, in a fit of panic over what clothes to take, leaves her son Michael behind. Grusha, unable to abandon the child, takes him and flees the city, risking everything from her life to the love of her fiancé, Simon (Cillian Browne), in order to save Michael.

The combination of the love story, the trials Grusha faces as she risks everything to protect a child not her own, and the enthusiasm and passion of the actors immediately swept the audience up in the narrative flow.

The props used throughout this production were kept to a minimum, Marie Hegarty’s costumes were simple, yet elegant, as the actors relied on their skills and worked with the space to give life to Caucasian Chalk Circle.

This play took place in the Mick Lally Theatre, a small space that could easily be seen as confining. However, this production made full use of this intimate space. As the actors ran across two opposing sets of stairs, their costumes brushing the shoulders of the audience, we were captured by the energy of the moment before the actors would disappear in the flash of a costume change, reappearing on the opposite side of the theatre. This production adapted Caucasian Chalk Circle to the space, making full use of it as a narrative tool, rather than limiting themselves to the confines of the main stage.

A highlight of this production was the performance of Paige Louter, the actor who played Grusha. Louter’s Grusha was both sincere and fierce, encouraging the audience to side with Grusha from the beginning of the first act, yet simultaneously demonstrating her independent streak. One particular scene in which Grusha attempts to argue her case for keeping the child, but struggles against the enigmatic judge Adzak (Jérémie Cyr-Cooke), left the audience at the edge of their seats, bursting to come to Grusha’s defence.

Caucasian Chalk Circle was both heartfelt and filled with enthusiasm and is a credit to the students of NUIG as well as the Core Theatre College.