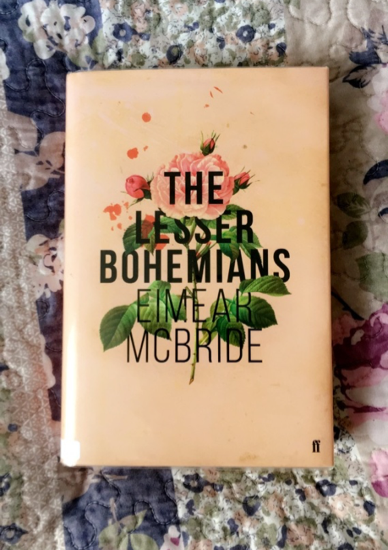 The Lesser Bohemians by Eimear McBride

A review by Martina Garvey

Eimear McBride is an award-winning Irish writer who spent her early years in counties Sligo and Mayo. Her debut novel A Girl is a Half-Formed Thing won the Goldsmiths Prize and the Baileys Women’s Prize for Fiction. Eimear McBride’s eagerly anticipated second novel The Lesser Bohemians was published in 2016 by Faber & Faber.

I first read A Girl is a Half-Formed Thing in college and was immediately struck by the raw beauty and innovative style of McBride’s prose. The use of an internal monologue to narrate the story sucked the reader into the chaotic mind of the main character. Since then I have been keen to read more of her work and The Lesser Bohemians did not disappoint.

The novel follows Eily, an eighteen your old Irish émigré in London, as she enters drama school and begins to negotiate the transition from adolescence to adulthood. Eager to become immersed in London life and rid herself of her virginity Eily begins a relationship with Stephen, an actor twenty years her senior. This relationship quickly progresses from a string of casual sexual encounters to a passionate and intense affair. Eventually Eily’s new found love threatens to consume her as she battles to overcome jealousy, her own childhood trauma, and the revelations of Stephen’s dark past.

The action in the novel is centred on the emotional and sexual relationship between Eily and Stephen, a fact which has garnered some criticism from the press. However, I found McBride’s detailed depiction of the ebb and flow of young love incredibly moving and honest. For me, the beauty of McBride’s work lies in her ability to use the bare bones of language to depict the deepest of emotions in minute detail. In an interview with The Guardian, McBride stated that ‘language is a vehicle for content, not a showpiece in itself,’ a philosophy that is evident in her sparse writing style (The Guardian, 28th August 2016). The constant shift between external and internal monologues; coupled with the use of fractured sentences and neologisms, weave a rich and multilayered tapestry of life that engulfs the reader.

Unlike the traumatic ending of McBride’s debut novel, The Lesser Bohemians ends on a decidedly more hopeful note hinting that perhaps love does indeed conquer all. I enjoyed this book immensely for its experimental use of language, emotional depth and tender depictions of love and sex. However, if you are a reader who enjoys a book with a cohesive narrative and multiple plot twists then this is not the novel for you.