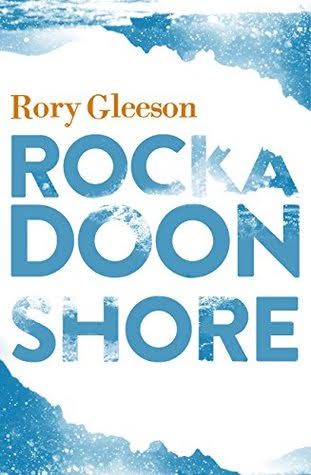 Malachy lives in a house on a hill overlooking Rockadoon Lodge. It’s been a long time since it’s been continuously occupied, but has been temporary home to holiday makers over the years. Since its last permanent occupant left people have come and gone, so it’s not a huge surprise to observe a car roll up the driveway one nondescript spring Saturday. An immediate unease hits Malachy when the passengers begin to tumble out of the vehicle – a tall blonde with sunglasses perched on her head emerges from the driver’s seat, two excitable young men wrestle themselves out of the back, over compensating from being cooped up for so long; a morose looking third male drifts to the front door, followed by a woman who appears to find the key to the house as well as struggling to take charge, and another young woman who manages to catch her jeans on the car door. There’s something about the group that doesn’t sit well with him, but he can’t quite put his finger on what it is.

Rockadoon Shore begins with Malachy’s perspective on the group of young twenty year olds, and shifts one by one to them as the story goes on. They’re a collective of University friends, who were randomly assigned accommodation together on an organised surf holiday a year before and have remained close since. As is the nature of first-year college rockadoonfriendships, gaps are beginning to widen in their interest in each other; rivalries, growing realisations, circumstance changes are all threatening the bond, and this weekend away is supposed to fix it. Rockadoon Lodge is Cath’s maternal family home, and she has endeavoured to gather the crew in the run-down, mouldy, damp abode to reignite the spark in their friendship.

Set over three days, the story charts what becomes the breakdown of the group rather than the making of it, fuelled by aggressive drinking and smoking, irrational and reckless behaviour and deliberate misunderstandings. You know, the usual end-of-days weekend experienced by students on the cusp of adulthood who are still being mired by childish, destructive self-obsession. The discovery that you have less in common with your friends than you thought and that you’re drifting apart can be disproportionately traumatic, and the panic to patch things clumsily up in a package of drink and drugs and organised fun is pretty much destined to go badly awry. Which of course it does here, in spectacular fashion.

Each member of the little group is worse than the last, and Gleeson’s clever devise of continuing the collective story chapter by chapter from the point of view of each of them in turn is a really subtle and well executed insight into their individual thought processes. One of the conflicts that arises is the crush Cath has on her friend DanDan, recently bereaved but determined to find his way out of his grief. She misreads a conversation they have, and is appalled and furious when he rejects her advances; he in turn is in disbelief that she could possibly have misinterpreted what he said. It’s an interesting study in he-said/she-said and the fall-out that occurs when neither is willing to back down or take a step back. Which would be the mature thing to do. Which wouldn’t, at this stage, even cross their minds.

At an average age of 20, they’re all at a point in their lives when they are convinced they’re fully-functioning adults, but being so recently inducted into the club they’re trying to outdo each other in said adulting – drinking to their hearts’ (but certainly not their livers’) content, smoking illegal drugs with an unconvincingly nonchalant attitude, engaging in self-destructive relations with each other just for the sake of it – Gleeson perfectly encapsulates it all. Observing each of them through each other’s eyes makes way for really funny moments that may not otherwise have been that humorous, and the characters, though utterly self-absorbed and mostly completely lacking in self-awareness, are given unexpected complexities that only a writer with a keen sense of the human condition can create. Granted, Gleeson isn’t too far removed from his characters’ ages – he was born in 1989 – but in creating this tale of complicated emotions and dashed hopes and dreams he shows a gift for storytelling that surpasses his years. An impressive debut from a talented writer, Rockadoon Shore is worth a read if, like Malachy, you’re feeling outnumbered by the Millenials. By the end of it, you’ll be thanking your lucky stars you’re not one of them.