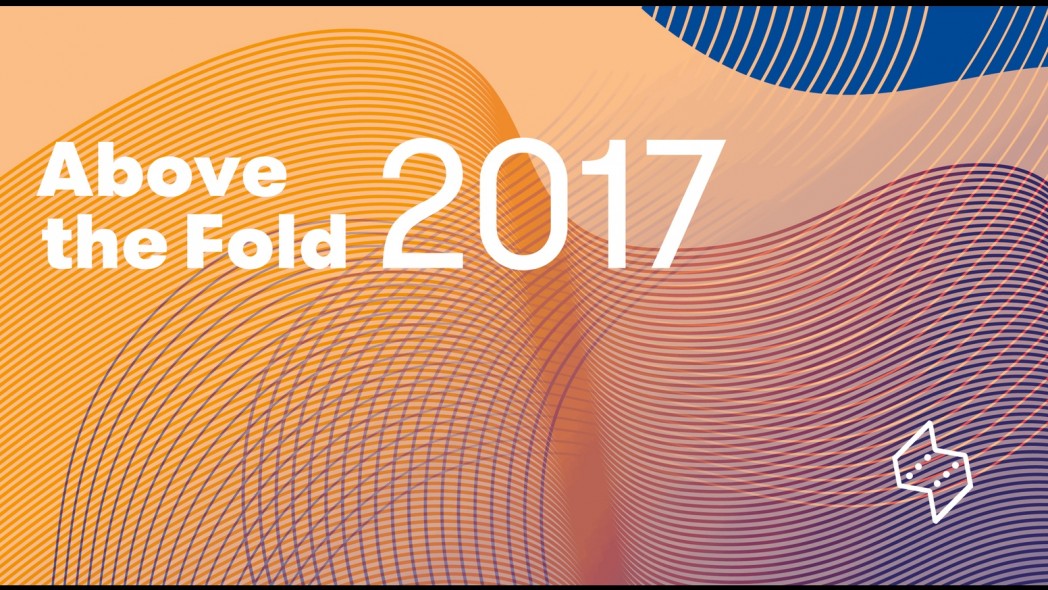 The inspiring new creative conference Above the Fold returns to The Mick Lally Theatre on May 6th. Born of a shared enthusiasm for arts and culture in Ireland, AtF will present talks from nine of Ireland’s brightest creatives, carefully chosen for their contribution to Ireland’s cultural landscape and their motivation for striving to create great work.

You can get tickets and support this welcome addition to Galway’s cultural scene here: http://atftalks.com

­Hi guys, can you tell us a bit about yourselves?

Jane: I am a graduate from the National College of Art and Design, Dublin, and the founder and director of Above the Fold. I moved to Galway when I was six and one of my earliest memories of the city was the Galway Arts Festival, I remember walking through Spanish Arch and Quay Street absorbing the sunny atmosphere.

Since then, my fondness for the Arts in Galway has amplified from witnessing a succession of fantastic events between Cúirt, exhibitions at the Galway Arts Centre and Tulca Festival of Visual Arts. After interning for Tulca in 2011, I caught the Arts bug. I moved to Dublin to undertake the Visual Culture BA at NCAD, and spent every waking moment interning and volunteering for arts organisations in Dublin.

Ciara: I’ve loved everything Art and Design related for as long as I can remember. But, when faced with the choice of following a creative path or getting a “real job” I chose the latter, and passed up on my opportunity to follow a career in Art. During my travels, I continued to admire those who had the guts to chase what they loved doing, all the while wishing it was me. I was home for a summer in Galway when Jane decided Above the Fold was happening, and so it did. I was on board immediately when she described what she had in mind, and since then we’ve dedicated every spare moment to grow Above the Fold to the level we are at today. I work remotely from the sunny south west of France, so it’s lovely to have such an interesting project to give me an excuse to come home to Galway, friends and family, a few times a year.

How did the idea for Above The Fold come about?

J: I could lie and tell you that passion and enthusiasm led to the creation of Above the Fold, but it’s actually the complete opposite. After graduating from Art College, I felt disappointed with the Arts in Ireland. I had undertaken one too many internships and had witnessed an exodus of friends and family members emigrating to pursue employment prospects in the arts.

Rather than sitting around lusting after the job of my dreams, I used the experience I had gained from interning and merged my passions – art, design, music and events – to set up a talk series. A friend of mine told me to book the venue and the rest would come together, and it did.

Ciara had just returned from Toronto and was preparing to move to Bordeaux so had a bit of time on her hands. She very kindly supported the project and put in a huge amount of effort to bring the event to fruition. She’s back to work on the second event and who knows, if Above the Fold thrives into the project that we’re hoping for, it might even be able to bring her home.

C: It was all her idea! We were forever dreaming about all things Art and Design when we were in school together, so I guess it was just a matter of time before it grew from daydream to reality. It’s true that we felt disillusioned with the lack of creative opportunities in the West of Ireland, and that paired with the mentality of “if you can’t find your ideal job, create it” resulted in Above the Fold. We dreamt up something we’d like to attend, and we made it a reality.

What was the craic at last year’s Above The Fold?

J: The purpose of Above the Fold is to celebrate creativity throughout Ireland. Ireland is bursting with creative talent so it was an easy task to select a group of people that I admired and felt influenced by. I wrote a list, fired out some emails and nine creatives kindly took a risk on Above the Fold.

Speakers were chosen for their impact on Ireland’s cultural landscape, we selected people who base their practice in Dublin, Galway and elsewhere to showcase creatives throughout the country. We hoped that Above the Fold would create an educational resource for our audience but also to form collaboration between speakers – I recall Matthew Thompson calling Brian Kenny over at one stage to discuss a potential collaboration and Melanie Lynch and Dani Gill worked together on the Illuminate Herstory event on Shop Street, so it certainly achieved that. C: It was fantastic! Can I say that? It truly was. We were spoiled with the quality of the speakers that joined us, and the atmosphere at the event was electric. There was an element of education, insights, hints and tips, as well as an opportunity to network and meet other creative and likeminded people which proved invaluable for all involved. It was such a success that we immediately began planning our next event, and here we are one year on.

Above The Fold has also been busy throughout the year holding a few pop up events such as Women in Design: Breaking Through The Glass Ceiling and Don’t quit your day job… can you tell us a bit more about these events, why you ran them and how they were received?

J: I interned for the Year of Irish Design 2015 (ID2015) a government led initiative that promoted design at home and abroad. Having studied theory of design at NCAD I had learned a lot about international design, but ID2015 opened my eyes to contemporary design in Ireland.

As part of my final thesis, I discovered that women only represent 25% of the design workforce so once Above the Fold developed I used this statistic as stimulus for an International Women’s Day event. The talks were free to attend and held in the Liquor Rooms, Dublin. I managed to secure a group of incredibly talented female designers which was the easy part and it led to becoming one of my proudest events to date so I certainly hope to curate it again next year.

Don’t quit your day job was a little more selfish. I quit my day job to focus on this year’s Above the Fold Creative Conference, so again I used this as inspiration for a talk series that was held in Dublin’s newest co-working space, The Tara Building. The space is full of young, energetic creatives who are taking a risk on their passion projects so I felt like it was the perfect space to host an event that would showcase fresh Irish talent. It’s clear that Above The Fold has a strong passion for Irish design – are there any people working in design from Galway that you recommend we check out?

C: Above the Fold collaborated with Coffeewerk + Press for Galway Culture Night last September and we chose four designers from the West of Ireland to participate in the event. Leon Butler is a graphic and visual narrative designer, his work has been receiving accolade throughout Galway and internationally from branding the Galway Gin Bottle to creative collaborations with 72 + Sunny. Julie Connellan also participated, Julie creates abstract metal wear, with designs that are intricate and could easily be placed in an art gallery setting. We also had Gala Tomasso, whose illustrations are funky and eye-catching and recognisable throughout Galway. But there are many more that need to be discovered, so hopefully you will be seeing them on the Above the Fold stage over years to come.

What’s the craic with this year’s Above The Fold?

J: Above the Fold 2017 will present nine creatives whose work is ambitious, influential and makes an impact on Irelands creative landscape. We want our audience to feel inspired and motivated. I understand that, like Ciara, a lot of people postpone their creative passions to pay the bills, so I want our audience to realise the there is more to life after art college, that you can create a living from your passion.

C: I can speak from my own personal experience when I say that the events have had a huge impact on our audience members and speakers alike, instilling inspiration and providing them with the knowledge and networking necessary to chase the creative dream, because shortly after last years conference I began life as a freelance illustrator. I think, had it not been for Above the Fold, I’d still be on the outside looking in. So, that’s what we want to achieve to some level with everyone who comes into contact with our events, and I’m just so grateful to be a part of it all and to be inspired every day.

Finally, we hear there will be a party afterwards – can you tell us more?

J: Yes, exciting stuff! Above the Fold is not exclusively based on art and design, it’s focused on supporting the arts in Ireland so we also want to promote and showcase Irish music. Niall Byrne (Nialler9) is a music blogger, DJ and a patron to the Irish music scene – he frequently promotes and showcases Irish musicians on his blog so I contacted him to see if he was interested in bringing the Lumo club night up to the event and he seemed keen.

C: Lumo is run by Niall, Simon Roche from State Magazine and Gavin Elsted of Adultrock. They run some amazing club nights in Tengu, Dublin, so we’re delighted to bring them to Electric for their Galway debut. We’re collaborating with O’Hara’s on the after-party, and we’re delighted to be working with an Irish brewery on this project.