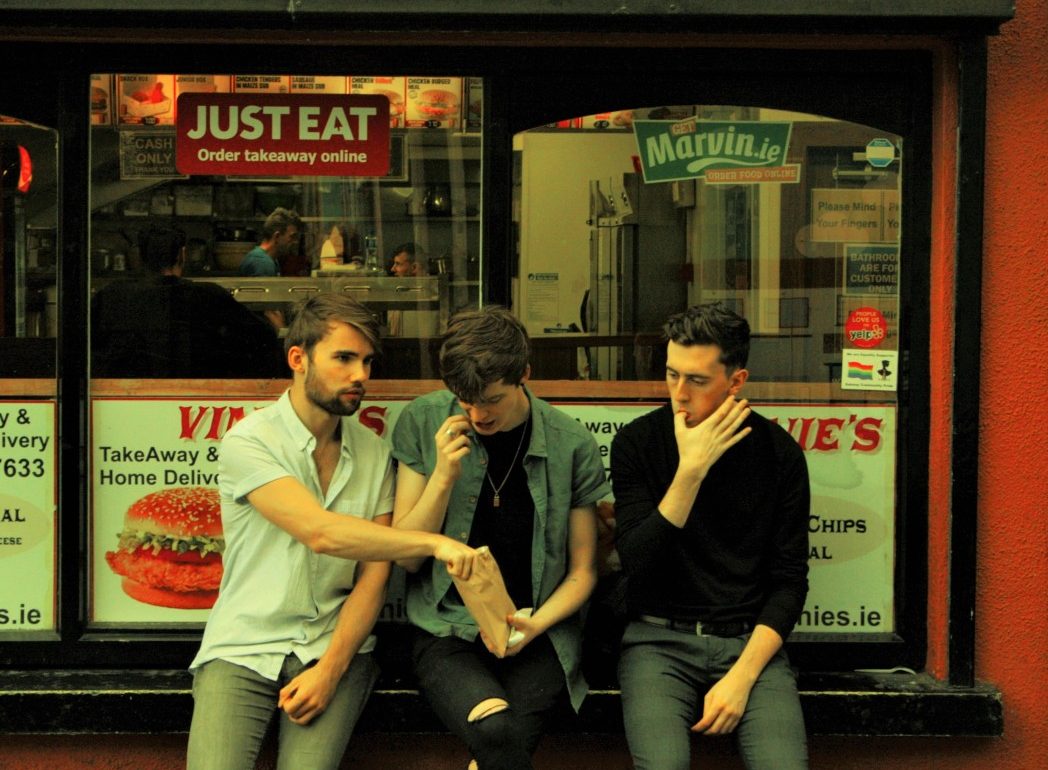 The Clockworks are one of Galway’s newest bands, but the trio of James McGregor, Seán Connelly and Damian Greaney have already begun to make a name for themselves around the city. The post-punk, indie-rockers are extremely ambitious and have received very positive reviews from the likes of The Last Mixed Tape and Hot Press Magazine, where they were chosen as Ones to Watch. They released their debut single ‘Girls Like You’ (listen HERE) during the summer and they play a headline show at Citóg this Wednesday, before touring Ireland and the UK. We asked them to pick their five favourites from the West of Ireland and they, very eloquently, did.

The sound track to many the house party, late night drive home from a gig, and drunken bop at The Roisin Dubh’s Silent Disco, Oh Boland’s ‘Where’s The Beach?’ is undoubtedly our number 1 Solid Gold Jam. Oh Boland‘s raw, animalistic presence during their live show is captured perfectly in this track, without forfeiting their own unique sense of melody. The lads’ “we do what we want” attitude truly is something that will inspire young musicians in the West for many years to come. Ourselves included.

Field Trip – You and I

A group of lads that we’ve only had the pleasure of getting to know quite recently, Field Trip are one of our favourite bands in the country right now. After sharing the same Whelan’s ‘Ones To Watch’ stage, as well as playing together at the Galway Fringe Festival, we knew these boys were something special.

Field Trip’s song ‘You and I’ is a perfect example of how to write a pop song without selling out. An ear worm that won’t be vacating your head for weeks on end (trust us), they’ve captured perfectly the best parts of Weezer and Black Lips, with their own unique swirling chorus filled tune. 10/10 would bang.

One of the newer bands on the Galway music scene, Crude caught our eye at a gig we played with them in The Loft. We had played with them a few months earlier, and after a change in line-up (the addition of singer Conor Ostheimer), they seemed to be heading in the right direction.

We’ve added Crude’s song ‘Octave’ to the list because it has so much immediate potential. We grabbed their demo, which they were flogging for free at a gig, and listened to it recently as we drove to a gig in Cork. That song really impressed us. If these four lads stick together, they could do damage.

Ultan Conlon‘s ‘Really Gone’, featuring the legendary late John Martyn, is easily one of our favourite songs from the West. This is one of those tunes that commands your emotions from the beginning. We’ve always been close to Ultan personally; he was one of the musicians that inspired us want to make music in the first place. This song highlights his talent for working arrangement, melody, lyric and emotion into a song. The tone of the two voices work really well together. This is one of those headphones on and eyes closed songs, and definitely one of our favourites to come out of the west.

This song comes from a relatively new band, and one that we really like at the moment, Drown. These lads and lady infect you with the guitar hook and groove. The chorus is really effective and the song as a whole finds it’s strength in it’d nuanced simplicity. The line ” you’re so perfect, you’re so pure, you’re so fucked up and insecure…I’m sure” is our favourite line of theirs. Words are important to us and that line stuck out as powerful. We’re really fond of the band, and think that their debut tracks show great promise.

The Clockworks play their headline show at Citóg this Wednesday, the 21st of September. The Sour Seeds and Saint Facade support. Check out all the details at the event page HERE. Go along and get an intimate listen to this band before they get big!