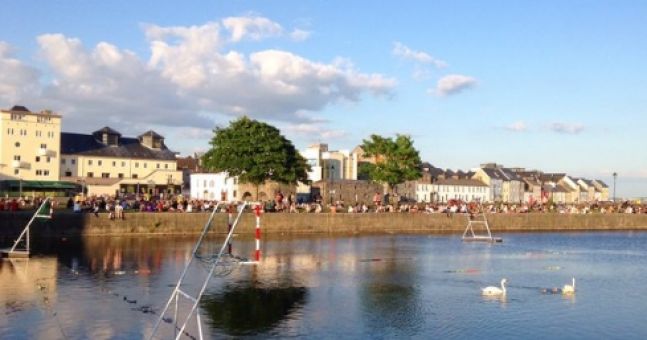 A wise man once said Galway is a small city in the west of Ireland that thinks it’s in the south of France. Indeed if you, like many, found yourself at The Spanish Arch at the beginning of April you’ll have realised when the sun is out, there’s few better places to be. You will definitely have seen a plethora of people enjoying the first sunny weekend of the year. You probably will have seen bare chested men, confirming the temperature to be over 12 degrees. And if you were lucky enough you may have caught young man called David (whose last name won’t be used for the sake of privacy) with his ‘Session-One’ (a parody of the world renowned ‘Funktion-One’). David, a first year Engineering student in NUIG, says the contraption that brought upwards of 200 people to Spanish Arch for consecutive nights was ‘a side-project’. It’s essentially a bike with a frame attached to carry his self-built speaker, with built in lights and hooked up to his decks. Having brought it out for the first time over RAG week – ‘That was a spontaneous decision on my part – the general reception was you’re fucking mad but it’s class!’ – The session-one is popping up more and more these days. ‘Basically, a portable party that I can bring anywhere!’. Hard to miss, certainly.

‘I only actually picked up DJing in January. I got a good deal on decks and it’s something I’d wanted to do for a long time. I seem to have caught a bit of attention with regards to things I’ve done recently. Recently now with the fine weather I’ve decided to start testing it out and see what people think about it and people love the thing! No one’s seen anything like it and I’m delighted with it. I wasn’t really sure what I was going to do with it. But I knew it would be a way to have parties in different places around the city’.

You most certainly won’t have caught any inkling of the supposed Garda clamp down on public drinking in the area. The proposed clamp-down on public drinking in had had no affect. In fact, there’s been almost a full 180 degree turn in terms of plans for the Arch, and possibly a shift in how we utilise space for culture, arts and performance within the Medieval layout of our City, gearing up to 2020.

New Galway City bylaws introduced towards the end of 2015 had banned public drinking in the City, including parks, streets and beaches. This, alongside strong warnings from the Gardai had led many to believe that cans at Sparch would be a thing of the past. However now, the Council and Gardai are considering turning Spanish Arch into a ‘designated drinking area’ with safety railings and warning signs. Indeed this could prove to be a wise move, as David sees the move to ban public drinking as more counter-productive in a sense.

‘I’ve always thought that banning something or making it illegitimate is the completely wrong way to go about things. Because there’s always going to be people who are willing to break the law, and they tend to be very unfavourable people. So what happens if you ban drinking at Spanish Arch is you’re just going to have a group of unfavourable people down there breaking the law’

As much as the people of Galway will be rejoicing in the Council’s recent decision to consider making Spanish Arch a designated drinking area, for David and others it can be much more than just cans on a sunny day. It can be seen as such a great space that is so unique to Galway and can be used as a cultural space, and a massive touristic draw, rather than just a drinking spot.

‘I spoke to a lot of people when I was down there and they all loved what was going on. I heard that the main reason on clamping down on public drinking at Spanish arch was that it seemed unsavoury, that tourists didn’t like it. But from talking to people who’ve come here from across the country and abroad they love it. Just relaxing in the sun, and now I’ve tried to add another dimension to it, that of a chilled out club setting. I think that’s something that we should develop on, that’s something that we should keep and try to grow. Something new and something completely different different that’ll actually bring people to Galway. We can make this a cultural thing. I’d like to encourage a positive attitude to this kind of scene, rather than clamping down on it. It’s the sort of thing that screams of the character of Galway’.

What remains however is the delicate balancing act of retaining the Arch’s unique atmosphere and show that it can be used as a cultural space, whilst detaching the link of public drinking and anti-social behaviour, a tie claimed strongly by those against the ‘designated drinking area’ proposal. Something of which David is well aware ‘I don’t wanna disturb anyone, I don’t wanna make a mess or set up too close to someone’s house. I just wanna have a party but have it in such a way that it doesn’t affect anyone negatively’.

Indeed, Spanish Arch hit the headlines for all the wrong reasons during RAG week this year as over 1000 empty bottles of Buckfast were reportedly found in the drained Claddagh Basin. Between littering and a lack of Garda authority, is it possible to remove the negatives from the drinking area?

Councillor Colette Connolly described the designated drinking area proposal as ‘ludicrous’ and claimed the city council should be making a greater effort to enforce existing drinking bye laws, referencing how strictly such bylaws are enforced by local authorities in mainland European cities.

Similarly, Labour Cllr Niall McNelis who played a major part in bringing the litter in the Claddagh Basin to the attention of the nation, said the numbers of people drinking down at the Spanish Arch over recent weekends was ‘a joke’ and that the lack of any Garda presence was a ‘farce’. ‘There wasn’t sight nor sound of anyone. You wouldn’t see it in any other city. I’m just wondering why we can’t put a garda down there?’

‘What I try and do is I have friends down there with me. Between them and myself we keep an eye on the crowd and try to make sure everything is going down well. If we see anyone acting out, we just go up and talk to them, to try to diffuse the situation. If you just go up to them with a sound attitude and say ‘hey look, you’re doing this, take it easy’ it’s fine, they’ll calm down and stop doing whatever it is they were doing.`

With the possibility of Spanish Arch being now being solidified civilly as one of Galway’s best spots, David really only has one favour to ask of the masses who came out and showed how great it can be.

As for the future, the city is one’s oyster when your entire setup is on the back of your bike.

‘I’d really like to create some type of dialogue, with the council or people who could let me take this to other places, I’d love to close down a street for a few hours like the Roisin Dubh with their street parties. If I could get some momentum going and have a crowd I could get in touch with and say ‘be down here in a few hours and we’ll have a ball’, that’d be ideal. As well as that the manager of one of the nightclubs in Galway was actually down on one of the nights recently and he invited me down to play a couple of sets in his club, so you might see a bit more of me in the future!’