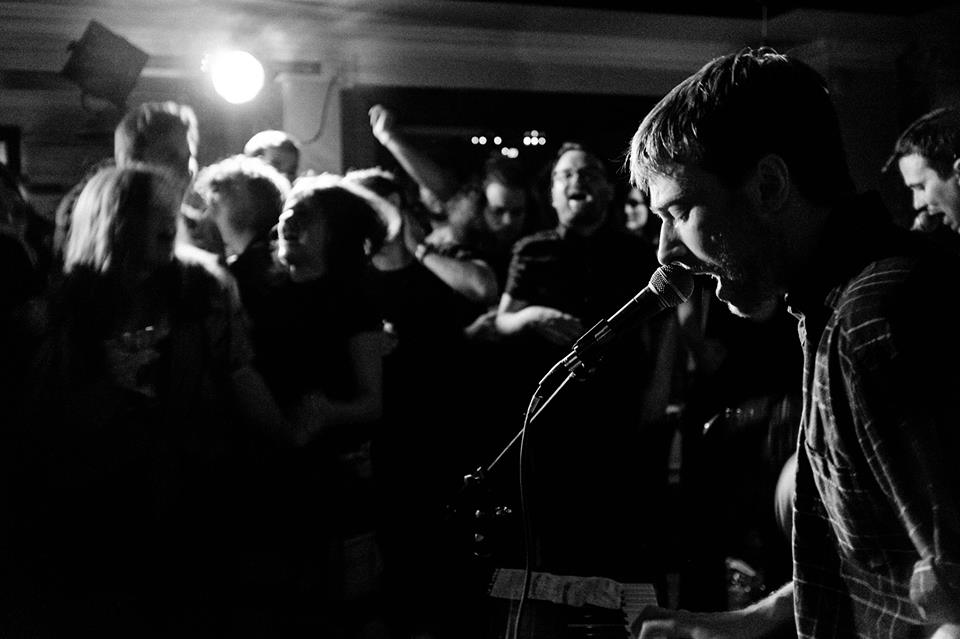 Now that’s how to put on a night of music! Across two stages, over the course of almost 7 hours, the audience was treated to some of Galway’s best music as well as a sample of the most exciting indie acts to have graced the Strange Brew stage in the past, from around the country. It was a fantastic night; offering asylum from the lunacy of the streets on Ladies’ Day. There were so many bands playing, in fact, that I couldn’t catch them all. But here are a few thoughts on the bands that I did hear.

The evening began down on The Róisín Dubh’s mainstage with Strays. They had a tasty, distorted, old-school rock sound that powered through a grungy set. They didn’t seem fully rehearsed, however, with a few missed vocal cues between the two lead singers and frequent loss of beat and timing mid song. Their pianist and vocalist Katri Adair was impressive both in voice and on the keys, while front man Maxi Browne was full of energy and rock’n’roll charisma. With a bit more tightening up Strays could really rock a stage.

Indie-rock outfit, Gangs, followed and got off to a slower start after the hyper activity of Strays; technical issues led to muffled lead guitar which affected the lushness of the sound. The lead vocalist also seemed out of tune slightly on a few of the first tracks, perhaps caused by a few of the songs beginning with a drum intro and vocals, making it difficult for him to find the correct key. They grew throughout the set, however, and the last few songs had a bit more kick to them, harking to Britpop and Indie-rock influences, with especially heavy bass lines and smooth guitar that found the crowd in more appreciative form. Fans of Arctic Monkeys or We Are Scientists would like the last few songs of this set.

I then moved to the more intimate atmosphere of The Róisín’s upstairs venue. Here I was treated to the chilled out hum of New Pope. It was a hazy, relaxing snippet of the evening. The bare, acoustic sound of the rhythm guitar beautifully complimented the gleaming electric guitar and keyboard. David Boland’s soothing vocals and his band’s drawn-out, hypnotic instrumentals resulted in nostalgic trances throughout their set. Eoghan McGinley’s backing vocals snuck into the corner of your ear to add to the jangly, reverb-soaked lustre of it all. The percussion was, perhaps, too loud and extravagant at times in such a small room but when played simply and delicately it worked excellently with the rest of New Pope’s sound. A great set, not even derailed by the bash of the Booka Brass Band creeping through the windows from the street party outside.

Back downstairs then, for Jet Setter – an alternative rock 4-piece from Dublin. I was very much looking forward to this set, as I had read good reviews of their most recent EP Never Had It So Good. Their set left me feeling slightly disillusioned. They went with a very laid-back collection of songs, almost horizontal. There is nothing wrong with laid-back, but when the lead guitarist is packing every spare second with loud feedback it grates against the mellow rhythm guitar and bass, leaving the songs lacking in texture. A lot of their songs rambled along at the same pace with very little growth or variation once the song had begun. Their final song “Nothing Left to Say to You” was a nice change of pace, with more layered composition. Jet Setter are a talented band with a fantastic lead singer, whose voice is somewhere between Billy Corgan and Conor O’Brien, but showcased an uninspiring set on the night. I look forward to seeing them live again, however, when they are feeling more enthusiastic.

SPIES were next, and they made for very enjoyable listen. The indie-pop 5-piece included many members of other bands that were on the bill for the night, but had a more unique sound and a tighter performance. Michael Broderick’s fantastic vocals and lyrics were absorbing and his performance as a front-man was captivating. With a sound similar to Vampire Weekend, but with a little more rock and a little less pop, SPIES showed how to make tasteful use of feedback and guitar noise. A great set from Conor Cusack, the band’s lead guitarist. He seemed to be having a fantastic time playing too, which makes all the difference.

Grounds for Invasion were billed for the upstairs stage. This was slightly surprising after a very good year for the Galway based electro-trio which would usually result in a mainstage slot, but it was the perfect setting. Electro acts can often seem quite detached from the audience, with the constant computer use, but this cramped setting and the up-close view of the intricacy of it all made for an engrossing show of lights, humour and emotive music. Will O’Connor (composer), Tracy Friel (vocals and keys) and David Shaughnessy (drums) went down a storm, with each song punctuated by roaring applause and approval from the packed room. The sound of the guitar was a little dull at the beginning of the set and needed more bite to highlight O’Connor’s gritty riffs. But the sound soon filled out, with Friel’s mesmerising vocals complimenting the music perfectly. The live drums worked beautifully on top of the programmed, electronic drums to give a real sense of depth to the sound. ”Dying Stars”, the penultimate song of their set, was a real experience when heard live; a lesson in how to compose and slowly build layer-upon-layer to whip the crowd into a frenzy. They finished their set with the up-tempo disco tune “Bruce Lee” to change the head-banging to bopping and dancing, leaving everybody with a smile.

No Monster Club and Oh Boland finished the night upstairs, playing on until well after they should have. No Monster Club’s quirky style of indie-pop is very endearing and innocent, with gripping riffs and melodies. Oh Boland, one of the country’s best live acts, tore the house down in glass-smashing, moshing style.

Highlight of the night: Grounds for Invasion – check them out, even if you are an electro-music sceptic.