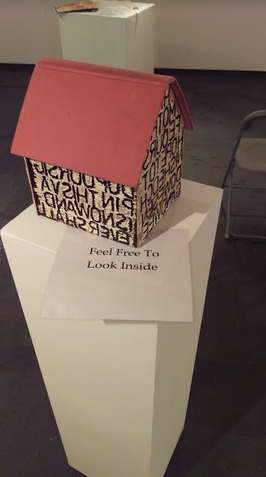 Having taken some time out to drop out to NUIG’s campus to see the GMIT Centre for Creative Art and Media third year print degree show CODA in the Quadrangle I wasn’t disappointed. My own interest in print led me to the university to see what the students are producing as their end of year show and I was surprised at the sheer standard of work on display. The short walk through the campus was beautiful and set a stunning tone before viewing the show. On my arrival at the exhibition space, I was welcomed by two of the graduates who were happy to have a chat about the show and provide me with information on both the work and the artists  and answer any other  questions I had.

The seclusion of the exhibition space in the quadrangle allows for a wonderfully personal experience with the work. The space and the work combine to produce a stunning little gem of a show.  The exhibition as a whole has an interesting flow of differing print styles and methods ranging from excellently executed screen prints, impressive woodcuts, fabric printing, bookmaking, digital prints and installation work. The variation in style and approach achieved by this six student graduate class was exceptional.

Micheal De Brun’s screen prints Galway Bay Series is a wonderful example of  technique. His fearless large scale use of positive and negative space along with interesting colour work makes for some striking pieces. His work is inspired by his life-long love affair with Galway Bay. Laney Mannion produced a series of  large woodblock prints which seem to express a stream of consciousness. The free flowing quality of the text and the deliberate considered effort required to create these woodblocks creates a  tension in the work for the viewer. I found myself returning to see new links in each piece and in how they inform each other. Laney has also created two mixed media installation pieces to accompany her print work in the space, a large cube made from her woodblock plates and an interactive artist book. This use of her plates as active pieces in the show created another dimension to her print work.

As I moved around the space, I almost missed some stunning work in a separate space at the far end of the exhibition. Behind a partition wall is a blacked out space where I found Jenny Newman’s digital prints entitled Reclamation 1,2,3 and 4. Jenny’s work has an ethereal quality achieved by her subtle use of colour on a velvety black background. The decision to exhibit these prints against a black wall was inspired. It gives the effect of a long exposure photograph of something which appears to be just out of focus and due to this, I found myself physically moving to and from the work trying to identify something which is perpetually just out of reach. The subtle and controlled use of tone and light through her use of digital printmaking, coupled with the low lit space invokes a dynamic atmosphere for the viewer.

I could go on and discuss the fantastic work of the rest of the exhibition but then I would be risking ruining the sense of discovery one feels on entering the space. If you haven’t yet seen work displayed in this space, it is really worth a viewing. The works shown highlight just how strong the works being produced by students within the GMIT art college are, and also give a great prelude to the Graduate Fourth Year Degree show scheduled for the end of this month.

CODA is open from 14th May to the 21st May from 11am to 4pm daily in NUIG’s Quadrangle.