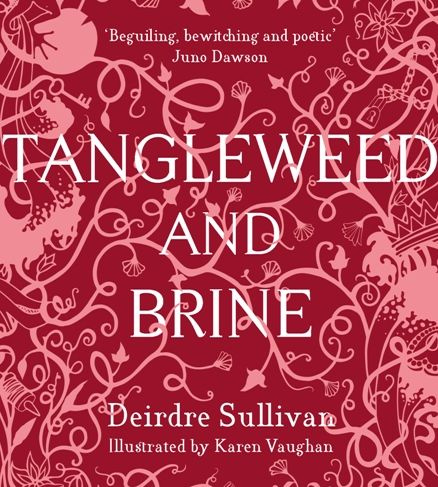 On Saturday the 30th of September, Deirdre Sullivan will be launching Tangleweed & Brine at the Galway branch of Dubray Books.

Tangleweed and Brine is a hugely anticipated collection of thirteen dark, feminist retellings of traditional fairytales by Deirdre Sullivan, one of Ireland’s leading writers for young people. In the tradition of Angela Carter, stories such as Cinderella and Rumpelstiltskin are given a witchy makeover. These stories, written in stunning and visceral prose, raise questions about ‘fairytale’ endings past and present, the role of women in the stories of our culture and whether it is better, after all, to be a witch or a princess.

‘Sullivan’s prose is delicate and masterful, but there’s a belligerence to it as well – these stories demand that we listen to the women at the heart of these stories’ – Dave Rudden, author of Knights of the Borrowed Dark

‘Salty and seductive, a collection of stories you’ll feel like you know in your bones.’ – Moira Fowley-Doyle, author of Spellbook of the Lost and Found

‘Deirdre Sullivan’s fairytales challenge us to rethink what the destinies of young women were in traditional fairytales’ – Jack Zipes, author of The Irresistible Fairy Tale: The Social and Cultural History of a Genre

Sullivan has been shortlisted for numerous Irish and international awards, and her acclaimed novel Needlework consolidated her reputation as a leading Irish YA author. Needlework was shortlisted for the Irish Book Awards and went on to win the Honour Award for Fiction at the Children’s Books Ireland Awards in 2017.

Tangleweed and Brine, born of Sullivan’s life-long fascination with fairytales, is presented in an intricately illustrated volume with black and white line drawings in the style of Aubrey Beardsley and Harry Clarke by young Irish illustrator Karen Vaughan. Author Deirdre Sullivan comments that ‘Fairytales and the retelling of stories play a huge role in shaping our expectation of story and of life. The reason that stories like Cinderella, or Red Riding Hood have survived as long as they have is because they have been shaped and reshaped to reflect the teller and the audience.’

Siobhán Parkinson, publisher at Little Island Books, sees Tangleweed and Brine as ‘a blisteringly powerful collection. Female energy is unleashed here in explosive stories of magic and witchery, love and betrayal, passion and revenge, oppression and rebellion, fear and pain, tenderness and redemption.’ Karen Vaughan is a designer and illustrator with a particular love for pen and ink. Since receiving her BA in Illustration from the North Wales School of Art and Design at Glyndwr University in 2013, Karen has worked as a freelance graphic designer and illustrator producing covers, illustrations and designs for numerous publishing companies and newspapers. Her intricate illustrations are very much inspired by folk tales, nature and the elaborate patterns and fashions of bygone eras. This is her first book. Little Island Books is an Irish publisher for young readers, which has been making waves on the Irish and international scene since its establishment in 2010. The award-winning independent company publishes new Irish writing, for example Eoin Colfer’s Once upon a Place, and works in translation. Little Island won the Reading Association of Ireland Award in 2011, and their books have won and been nominated for prizes including multiple awards from Children’s Books Ireland, the International Board on Books for Young People (IBBY) Honours and several White Raven awards (international awards assigned by the International Youth Library). Two of Little Island’s titles have been selected as UNESCO City of Literature Citywide Reads. The company was set up by author Siobhán Parkinson, who is the Publisher and Commissioning Editor, with Gráinne Clear as Publishing Manager and Art Director. For more information please see: www.littleisland.ie.