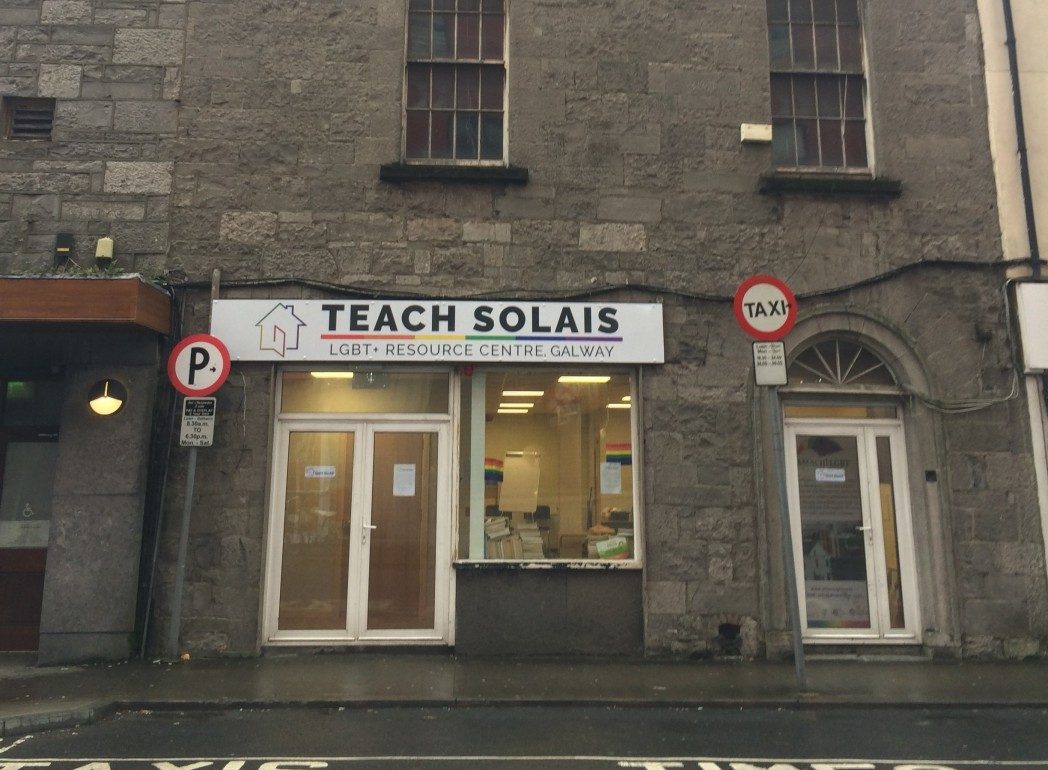 AMACH! is a volunteer run organisation which represents and advocates on behalf of the LGBT community in Galway city and county. They aim to reflect equally the diversity within the lesbian, gay, bisexual and transgender community by encouraging positive participation and actively advocating for a solid and safe support structure for the LGBT+ community in Galway. It is an organisation that was formed from the community, by the community and is a part of the community and one which provides awareness, educational and training events and workshops and endeavours to support and promote a socially inclusive society. Following a meeting held in July 2009, attended by over 300 people from the LGBT+ community in Galway, AMACH! was officially launched by Senator David Norris in July 2010.

Galway Film Centre’s AMACH!  ID Project (2010): a documentary made about the lesbian, gay, bisexual and transgender communities in Galway.

A priority for AMACH! is to ensure the establishment of a sustainable, visible, accessible, and dedicated LGBT+ resource space to address isolation by providing an alcohol-free venue for social networking and other vital supports. They have recently acquired a rented space on Merchant’s Road and I called in to chat to some of the board members of AMACH! about this welcome development.

“I suppose this is the most exciting time for us. We have a space, its ready, we’re opening it shortly to the public for drop-in centres and several different groups are currently using it: the LGBT+ helpline are using it every Friday and we also have a number of different peer support groups who are currently meeting here. The next stage is opening it up for various types of events, both educational and health promotion, but also for social events – fun times as well.” Maria Molloy is the Vice-Chairperson of AMACH! and has a background in medical science. After a period of social justice activism in college she joined the board of AMACH!  and started advocating for the LGBT+ community, something which is close to her heart. Because of her background in medical science Maria is passionate about health promotion in the LGBT+ community and has arranged for free HIV testing at the centre with AIDS West once a month. The long term goal is to establish full STI screenings and “get the word out about safer sex practices because the instances of STIs are going up, particularly in the LGBT+ community.”

Vivienne Ivers, Liaison Officer for AMACH!, is also passionate about improving the lives and experiences of the LGBT+ community. She recently completed a Masters in Health Promotion with a thesis on Mental Health and Social Exclusion of LGB People in the Context of the Marriage Referendum.  It was not a straightforward path to such an achievement: “I would have been quite a typical troubled young gay as a teen and fell into a bad scene – alcohol, drugs, no leaving cert – and then would have come back to college in my later years. Now the idea is to help other people who are maybe going through that kind of thing: to put knowledge into action.”

John Corcoran, grew up in Galway and remembers when the only place to socialise was the pub “so the idea of the centre – a place to relax, get a cup of tea or coffee, get information about what’s going on, maybe use the centre as a conduit for getting help that some people might need” is something that has always appealed to him. After being “roped in” to AMACH! by Nuala Ward (a seemingly common experience among board members), John rose to the lofty heights of Chairperson of the board and has been instrumental in getting them to where they are today.

Sitting as we are in the somewhat renovated space of Teach Solais, I’m interested to find out how they got here and what the future holds for the centre. “It’s been a long struggle with a lot of hurdles along the way to get where we are today” John tells me. “There’s been a lot of background work going on trying to get funding, which has been a major problem…  eventually we were put into the City Development Plan  and things really started to move in 2015 when we got funding from the City Council”. The struggle is far from over and, with rent and bills to pay, fundraising will remain an issue for Teach Solais in the future. Precarious as it is to rely on government grants, it will be crucial that the centre can meet its own ends through workshops, classes and events. However, with such a central and accessible building in a city that is sorely lacking in amenable spaces, one can imagine a lot of interest from other cultural and community groups. Indeed, the board are keen to point out that the centre is open and welcoming to everyone and not exclusively for LGBT+ people. “We’re not going to break down any of the inherent discrimination in society if we just keep it to ourselves” says Vivienne, “so that’s the idea, to kind of spread it out among the community and say ‘there’s nothing wrong with us, come and socialise with us!’”

Integration and community are central to the work of AMACH! and the vision of Teach Solais and Vivienne is confident about the effect such a centre will have in Galway. “I think not only will it give a safe space for the LGBT+ community but it will also help promote relationships with groups such as An Áit Eile that will raise awareness so we can integrate into the wider community and not just be an insular standalone community – ‘the other’ or ‘that minority’. We’ll just happen to be an LGBT+ resource centre but open to the wider community and that way we’re promoting the health of the wider community.” There is understandable concern among the LGBT+ community that since the YES vote, people might assume that everything is fine, job done, but as Maria points out “the stigma still is there, particularly for people in rural areas. The whole notion of ‘coming out’ is still such a scary one for a lot of people – the perception that maybe their family will disown them, that they will get bullied in school – this is still occurring in every town and every village in Ireland.  So it’s trying to get at those people as well and say ‘you are equal, you are a treasured member of this society as well and it’s OK to be who you are.’”

So what does the future hold for Teach Solais? Apart from plans for board game nights, book clubs, classes, workshops, gigs and events the board are keen to get feedback from the community and, as much as possible, allow the community to lead the way. “It’s a learning experience for us” says John, ”we’re just starting off and it has to be led by the community – there is a management group being put together from the community. AMACH! will handle the heavy stuff like finances but the management group will ideally take over some of the day-to-day duties.”

Teach Solais is also the perfect space to continue the work that AMACH! has been doing up to now, work that may go largely unnoticed by the public but is vital to many in the LGBT+ community. One such initiative is the LGBT+ Interagency Working Group which was formed in 2011 and consists of AMACH! and agencies such as the HSE, city and county councils, Galway Rural Development, City Partnership and VECs, An Garda Síochána, Mental Health Ireland and Jigsaw. This group will be using the centre as a way of getting their services out to people in the LGBT+ community who might not generally be inclined to go directly to them. Members of AMACH! are also involved in Connecting For Life which is the national suicide prevention strategy and shOUT! who are a support group for LGBT+ people under 18. In general AMACH! will continue to promote health and wellbeing through regular fun activities and build on their relationships with other groups such as local community record label Citóg Records who recently organised a fundraising gig for Teach Solais and of whom the board speak highly. “It was an incredible night, such an amount of great talented bands and such a great buzz” Maria gushes, keen to dispel the stereotype of “that awful music that goes with gay bars” and pressing the point that people with good music taste “do exist within the LGBT community!”

As our chat comes to an end I leave the meeting with a newfound appreciation for the work that AMACH! has been doing these last seven years and the fact that Galway has such a strong LGBT+ community led by passionate and committed individuals like John, Maria and Vivienne. This city faces many challenges and has some major obstacles to overcome in its ambition to become a modern European Capital of Culture but, as always, the people of Galway are its greatest resource. We can all take pride in the work of AMACH! and in the establishment of Teach Solais. Great cities are built on strong communities, the healthy interaction of these communities and the inclusion of all their citizens. As John says, “it’s a big thing to show that you are a proactive and progressive city. We want to make Galway a fantastic city to live and work as an LGBT+ person. Galway is a progressive place – I’ve always found it a very safe place to grow up – but let’s make it better.”