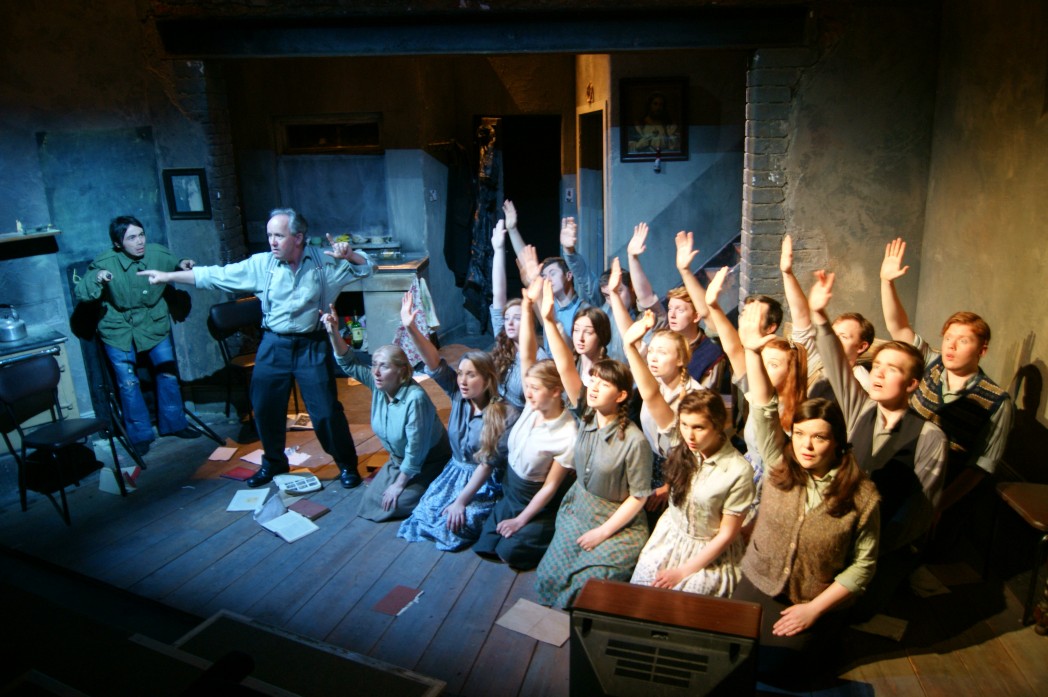 Patrick McCabe’s 1995 novel The Dead School was lauded by critics for its themes of historical, societal, and political revolution. The transfer into Decadent Theatre Company’s newest stage version of McCabe’s novel has not diminished the import of this Irish story in the least. On the contrary, Andrew Flynn’s stage production has brought the characters startlingly to life in a swirling time machine of melody, drama, and language. Galway’s Town Hall Theatre was host to this arresting production 18 to 27 February.

Beginning and ending with the same scene in the play’s beautifully circular structure, the production describes the lives and tragedies of both Raphael and Malachy, separated by a generation and a new ideology, but meeting in the petri-dish of a national school as principal and teacher. Raphael is a traditionalist, both in his private life and as the principal of a national school, devout, straight-laced and up-standing. In contrast, Malachy is one of the ‘Me’ generation, declaring his protest against the establishment with the drugs and music of a new Ireland, alien and threatening to Raphael’s circumscribed world. Although Raphael’s and Malachy’s characters seem so diametrically opposed, their childhoods and their fates mirror each other in their dysfunction and chaos.

The Decadent cast is thoughtfully and very actively directed by Andrew Flynn, who takes magnificent advantage of individual players’ strengths. The play opens and ends focused on Malachy, played by Jarlath Tivnan. Tivnan plays Malachy as a tightly-wound bundle of graceful energy who does not simply walk across the stage; he dances. Even when sitting still, Tivnan infuses his acting with a dancing energy that expertly portrays Malachy’s unbalanced fury. No less energetic is Gerard Howard’s portrayal of Raphael Bell. The energy Howard infuses into Raphael’s journey from child to senior appears effortless and is a perfect vehicle for Raphael’s unthinking piety. The supporting characters of Nessa (Raphael’s wife), played by Kate Murray and Marion (Malachy’s girlfriend), played by Eilish McCarthy are no less stellar. Murray’s performance of the iconic Roberta Flack song ‘Killing Me Softly’ was haunting. And the chorus (too numerous, sadly, to enumerate) are boisterous, raunchy, and delightful.

Using ingenuous devices like a tipped-up table for an entrance wing, and a bin liner doubling as suicide tool and metaphor for life’s detritus, the staging was unique, clever, and easily manipulated, making scene transitions quick and seamless. The lighting was on the dark side, but on the whole, I think that was a good choice for this play’s setting of national school and pre-1980 Dublin. The choice of music, both sung on-stage and ‘radio’ broadcast was inspired and became an integral character of the play.

The success of Flynn’s adaptation of McCabe’s The Dead School is evident in that a fellow audience member had not read the novel, but was as equally delighted with the staged version as was I, who had read and loved McCabe’s novel. Decadent Theatre Company has a winner here, and I unreservedly recommend Cork, Dun Laoghaire, and Kilkenny theatre lovers (next on the company’s tour) not to miss this production.