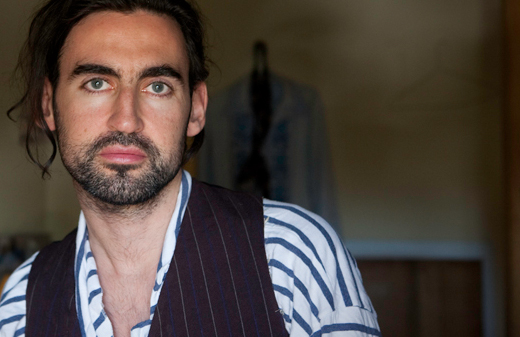 Following the success of Aindrias de Staic’s “The Man from Moogaga” at the 2014 Vodafone Comedy Carnival, the wild man of the west, story-teller extraordinaire,  re-jigged it for dates at the Galway Fringe this summer and most recently at the Westport Arts Festival. The  debonair de Staic has many strings to his well-worn bow. Since taking over as presenter of TG4’s “An Jig Gig” Aindrias’s style and panache have seen the ratings go through the roof. Splitting his time between foreign shores and the rainy west, Aindrias is a household name on the Irish Festival circuit and his infectious attitude and performative range has made it across most public house thresholds and every type of stage in between. His previous solo shows “Around the World on 80 Quid” and “The Year I Got Younger” have both won and been nominated for a slew of awards. De Staic consequently enjoyed a season on London’s West End in the musical “Woody Sez” which was nominated for the Evening Standard Award for Best Musical in 2011. Most recently, Aindrias was part of the wildly popular water protest song “No Privatisation” which went viral on youtube. Conor Geoghegan,well known for his numerous roles with local theatre companies Macnas and Theatre Corp as well as his comedy capers with comedy troupe The Legbreakers ,  caught up with Aindrias in the Secret Garden on Dominick street for Ait Eile ahead of his Galway appearance during the summer. They drank sugary tea and ate cakes in tweed suits. They spoke about crusties, the nineties, mackerels and the distinctly wild flavour of a Galway night. Conor went to the gig to check it out for for Ait Eile. So The Man from Moogaga, a new departure for the Man from Shrule?

‘Try and enjoy the art, d’ya know? Because its more valuable than money like and like that if you get a poem or a song; write it down and do it for the craic and enjoy it.Because you’ll often find that with stuff, the best stuff, comes from having the craic..jam it out, and truly enjoy it..‘

Sitting in the Mechanics Institute on Middle street, a masonic building with some dubious echoings of an old hellfire club ,  I waited with the chatty audience on a close July night. The space itself had a number of awful paintings dotted around the room coupled with some very curious ornamental lighting. From the get go, quirky though the space may have been, it didn’t lend itself to for what was to ensue. A portrait of Michael D Higgins looked on with anticipation in advance of a divil even those tricky masons might have enjoyed.

Andrias de Staic pounces, bare footed onto the stage. Burning red and green (of Mayo!) light illuminating his expressive face as he begins. Shielding it from his eyes, Staic scans the audience, picking out the folks from Joyce Country, Tuam, Swinford and Shrule with every other townland in-between getting its due. The context is set and with his fiddle the melody is conjured, as he slips into a beautiful tune which invites us in as well as rousing us up for the yarn about to be spun. Coming out of the tune to an appreciative applause, Andrias begins to tell the tale of Moogaga.

Upon returning from Australia, Staic wanted to create a show that was deeper and that dealt with more serious issues-‘I wanted to do a big new show, and in my head a story had come about a guy who came from an Island and he goes to town.It was very mythical and magical… I could hear some of the music for it early on.‘.  Suicide, depression and poor mental health don’t sound from the get-go as the recipe for a show that had its early success at the Galway Comedy Festival 2014. But Staic’s infectious storytelling coaxes us in, unfortunately so much so at times one forgets some of the heavier themes the show seeks to address.

He delights us with details of a huge variety of characters. Even though we have never actually met them, each one becomes innately familiar to us, such is the charm of the show. Characters like ‘John-Joe’, ‘Banjo’, ‘Pajo’ and ‘Majo’; brothers who’s jibs and chat are as familiar as any GAA pitch on the weekends or country pub on a Sunday. During the first 10 minutes while Staic is busy weaving us into his tale two late arrivals walk in, late even by Galway standards. He is unfazed and without skipping a beat engulfs  them into the proceedings- “Well I’m not goin to shtart again!” – great uproar from his roused audience ensues and we quickly check back into the journey through Moogaga. At times the narrative journey can feel chaotic, the large and detailed amount of etymological references, place names and characters Staic manages to squeeze into show doesn’t give audience members much time to breath. But his sense of play and energy makes us quickly forgive our own geographical shortcomings and dialectical spectrums, as we cling on for dear life to the next fable-filled rollercoaster erupting before us.

In the second half a loop pedal begins to cause mischief. The pedal gives up but Staic is again is unflappable . The audience is led into a ‘tex mex’ rhythm, again brilliantly displaying his performative ease. Without overtly straining his audience or forcing unwanted melancholy on a Saturday night crowd, Staic approaches the darker themes in the show in his own unique and refreshing way. Moogaga is, as he explained in our interview, a new departure for him.”What I’m trying to do now is to move it from the head into action… if you can move it into action, as simply by even starting by recording it, thats the thing.” And it is a new departure, for the most part. For one it does not take place in the first person.  As a result there is less of an anecdotal feel to it, and the characters blossom out of new imaginative terrains.

“It’s almost like you have to put up a warning sometimes.“-De Staic reflecting on how audiences respond to the nature of the show, re-accounting audience members once leaving during a performance.- ‘I am aware that in any audience, particularly in the West of Ireland, that there’s people there who will be very close to that (suicide).‘  But rather than exploiting these themes purely for their comedic value, De Staic is attempting to fuse the rich narrative and comic gags into something much more wholesome and built on his own experiences. There are things which he saw in his own community and in his own life that he clearly wanted to respond to“What I’m trying to do now is to move it from the head into action… if you can move it into action, simply by even starting to record it, thats the thing.” Perhaps due to the high energy and pace at which Staic performed to the audience (of completely mixed ages and nationalities) or perhaps due to the beautiful sunny evening outside, there were too many reasons not to be somber and Andrias de Staic allowed us into (and out of!) a manically imaginative world, unscathed.

Describing one of his many characters in our interview a few days before the show- ‘…a guy named Mo Conneeliach, he lives in the Mo Choinníollach- in the kinda should’ve, would’ve, could’ve d’ya know?!’–The Man from Moogaga is a show that can certainly provide the laughs, easily get a toe tapping audience behind it, but more importantly has the potential with some development to start the conversation on a deep-rooted problem in Irish society. The Man from Moogaga is a show that I feel will not stay the same on any night. Brave in approaching a difficult topic, a show that like Andrias, is open to transforming with the given energy of a particular room and those who are within it. It is a show that is very hard to quantify in a review such as this because what Aindrias does is creating moments and connections with people, which in turn gives the audience a very particular experience of laughter, music and tall tall tales.

Aindrias quotes come from an interview which took place  in the Secret Garden in late August. To listen to the full interview follow the link below…